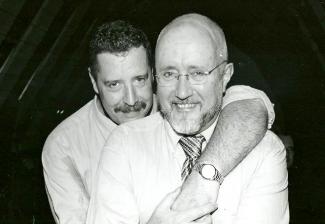 Robson, Christopher (‘Chris’) (1941–2013), architect and activist, was born on 29 January 1941 in Dublin, one of three children (two boys and a girl) of Harry Stanley Robson (1909–2003), an English architect working at the Office of Public Works (OPW), and his Irish wife Anne (née Potter; 1915–2008). Chris Robson grew up in the Dartry and Ranelagh areas of south Dublin and, after attending the local primary school, was among the first students educated at the newly-opened Gonzaga College in Ranelagh (1950–59). He spent a year studying maths, physics and chemistry at UCD (1959–60), before switching to architecture, graduating B.Arch. in 1966. His two siblings also became architects.

After graduating, Robson briefly moved to London and travelled to the Middle East and North Africa. He returned to Ireland in 1972 and took up the position of research architect with the OPW, working there until 1980. In 1973, having observed a proliferation of TDs in his constituency with names beginning with ‘B’, he carried out an influential study with Brendan Walsh (1940–2016) of the Economic and Social Research Institute (ESRI) on the relationship between alphabetical listing on ballot papers and voting bias in the 1973 general election.

From 1980 to his retirement in 2003 Robson was senior architect in the Farm Development Service of the Department of Agriculture. In that role he had considerable input into the Rural Environmental Protection Scheme (started 1994), the first nationwide scheme to encourage farmers, through grants, to protect the natural and cultural heritage of Ireland. In particular he developed the scheme’s policies related to farm buildings, influencing the site locations, forms, materials and colours of new farm buildings, as well as the conservation of existing ones. For this work he was made an honorary member of the Irish Landscape Institute in 2000.

Robson came out as gay in his mid-thirties, while homosexuality was still a criminal offence in Ireland. At an Irish Gay Rights Movement event in February 1978 he met activist Bill Foley, his partner for the next thirty-five years. Foley encouraged Robson’s nascent activism, and together they helped found the Dublin Lesbian and Gay Collective (1982–5). With the arrival of the AIDS epidemic in Ireland, Robson, Foley and others established Gay Health Action (1985–90), the first HIV/AIDS organisation in the country which began to address the crisis in the absence of any government support. Robson was later involved in founding the Dublin AIDS Alliance. He also served as secretary to the European Council of AIDS Service Organisations (EUROCASO), the body responsible for the development of the European response to the AIDS crisis.

A committed trade unionist, active in the Union of Professional and Technical Civil Servants (UPTCS, later IMPACT which in turn became part of Fórsa), Robson was part of the team that successfully negotiated the 1988 civil service agreement stating that discrimination on the basis of HIV status or sexual orientation would not be tolerated. He was also active within the Irish Congress of Trade Unions, helping produce its 1988 publication Lesbian and gay rights in the workplace. He played a role in getting sexual orientation explicitly included in the Unfair Dismissals (1993) and Employment Equality (1998) Acts, and successfully lobbied the Irish government to ensure that the EU Amsterdam Treaty included lesbians and gay men in its equality provisions.

In 1988 he was a founder member and co-chair of GLEN (the Gay and Lesbian Equality Network), whose lobbying efforts contributed, among other things, to the decriminalisation of homosexuality in 1993 and, with the Campaign for Equality, the introduction of civil partnerships for same sex couples in 2010 (the stepping-stone for full marriage equality, ultimately achieved by constitutional referendum in 2015). Robson accepted the People of the Year award for GLEN’s campaigning role in the Civil Partnership Act in 2010, and served on the boards of GLEN and of Marriage Equality until his death in 2013. Robson also served on the boards of the Irish Council for Civil Liberties (1989–98) and the Ana Liffey drug treatment project. In 1992 he was part of the first group of LGBT+ activists invited to Áras an Uachtaráin by then president, Mary Robinson.

In his leisure time, Robson was an avid hillwalker as well as a keen sailor and was a regular visitor to Baltimore in Cork, where his father had built a house by the sea. He was seldom without his camera and documented many significant moments of the LGBT+ rights movement from the 1980s to the 2000s, including protests and Pride events in Ireland, as well as Paris and New York. During Waterford Pride in 1999, he held a related photographic exhibition ‘Colour in the streets’ at the Garter Lane Arts Centre in the city. Robson donated to the NLI 2,000 photographs dating from 1992 to 2007, many recording Dublin Pride marches.

Robson and his partner were long-time residents of Chelmsford Road, Ranelagh. On 11 March 2013 they became civil partners after thirty-five years together. Aged seventy-two, Robson died just twelve days later on 23 March 2013 after a short illness. A secular memorial service was held for him on 30 March in the Pillar Room of the Rotunda Hospital, and his body was donated to the RCSI in accordance with his wishes.

Celebrated for his kindness, empathy and hospitality, Robson was an unassuming man described by his long-time friend and GLEN colleague Kieran Rose as a ‘natural conciliator’ who ‘did not relish conflict’ but could be insistent in facing down opposition ‘where a principle was at stake or progress threatened’ (GCN, Apr. 2013). In a tribute to Robson the Irish Landscape Institute (ILI) noted: ‘He was, it turns out, two architects: an architect of equality and an architect of the rural Irish landscape’ (ILI, 4 Apr. 2013). In a statement of condolence, President Michael D. Higgins acknowledged Robson’s ‘immeasurable contribution to Irish society’. Minister for Education, Ruairí Quinn, a long-time friend, and Minister for Justice and Equality, Alan Shatter, also offered statements of condolence upon his death. At the 2014 GALAs (Gay and Lesbian Awards, now LGBT+ Awards), Robson was posthumously named ‘person of the year’. From June to November 2021, the NLI hosted the exhibition ‘“Living with Pride”, photographs by Christopher Robson’ at the National Photographic Archive.