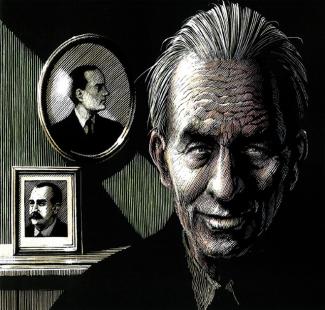 Ryan, Desmond (1893–1964), journalist, historian, and republican socialist, was born 27 August 1893 in Dulwich, London, one of at least two children of William Patrick Ryan (qv), journalist and radical, native of Templemore, Co. Tipperary, and Elizabeth Ryan (née Boyd). The family moved to Navan, Co. Meath, in 1906 during his father's brief and controversial editorship of the Irish Peasant, and lived thereafter in Dublin. Educated initially at Christian Brothers' schools in Dulwich and Westland Row, Dublin, Desmond was deeply influenced by his father's literary interests and courageous espousal of a post-Parnellite, anticlerical, pro-labour brand of nationalism. He was one of the initial forty students (1908) of St Enda's college, the progressive, Irish-language school founded by Patrick Pearse (qv), where his interests in the Irish language and Irish studies generally intensified. While reading Irish, English, and French at UCD (after his family's return to London in 1910) he continued to reside in the St Enda's premises at The Hermitage, Rathfarnham, where he taught classes and served as Pearse's secretary. He formed a deep and abiding devotion to his mentor, who on the eve of the Easter 1916 rising designated Ryan as his literary executor. Recruited into the Fianna Éireann circle of the IRB, in preparation for the rising he helped manufacture explosive devices in the St Enda's grounds. During Easter week he served under Pearse in the GPO in E Coy, 4th Bn, of the Irish Volunteers, after which he was interned for several months in Stafford detention barracks, Wormwood Scrubs prison, and Frongoch internment camp.

On release he sat his university examinations, obtaining an arts degree (BA, NUI (1916)), then joined the Freeman's Journal as a reporter. In a series of books and articles he contributed to the general public reappraisal of the Easter rising, propagating the ideas of Pearse and other 1916 leaders, and helping to forge the potent myth of their heroic and self-sacrificing idealism. In fulfilment of the author's express pre-execution wish, he edited Pearse's magazine articles chronicling the history of St Enda's, republished as The story of a success (1917), for which Ryan composed a concluding chapter. His biographical memoir, The man called Pearse (1919), the first book-length treatment of the subject, established the legacy of Pearse as chief leader of the 1916 rising, and propagated the hagiographic image of ‘a perfect man, whose faults were the mere defects of his straight and rigid virtues’ (Ryan (1919), 3). The two titles were incorporated into Ryan's five-volume compilation of Pearse's Collected works, published in a comprehensive edition by Phoenix in 1924. Ryan wrote the first biography (1924) of James Connolly (qv), whose republican socialism was exerting a growing and defining hold over his own politics.

Thus engaged as journalist and author, Ryan seems not to have played an active part in the troubles of 1919–21. Though supporting the Anglo–Irish treaty as a potential step toward a Connollyite cooperative workers' commonwealth, he was deeply disillusioned by the internecine divisions of the civil war, and moved to London as a practising journalist. He translated a biography of Pearse from the French of Louis Le Roux (1932), whom he had advised on the original work. In an autobiography, Remembering Sion (1934), most impressive for its passages of lyrical impressionist reminiscence, he modified his youthful assessment of Pearse, acknowledging defects of character and judgment, while still asserting the man's ultimate greatness. He wrote an historical novel, The invisible army: a story of Michael Collins (1932) (posthumously reissued as Michael Collins and the invisible army (1968)), and Saint Eustace and the albatross (1935), a Swiftean satirical allegory of London intellectual bohemia. In a body of historical works he pursued a study of Irish separatism through biographical treatment of certain of its principal figures. Unique dictator: a study of Eamon de Valera (1936), a balanced critique that identified both the flaws and achievements of de Valera's (qv) style of political leadership, was notable as a rare contemporary attempt at objective assessment. There followed The phoenix flame: a study of Fenianism and John Devoy (1937); The sword of light: from the four masters to Douglas Hyde 1636–1938 (1939), a study of the submergence of Gaelic civilisation and its ultimate revival; and Sean Treacy and the 3rd Tipperary Brigade (1945). In writing The rising: the complete story of Easter week (1949), Ryan supplemented vast personal knowledge with extensive research, and coined the phrase ‘the triumph of failure’ to describe the legacy of the insurrection; the book retains interest largely for its sketches of personalities, both major and minor, and its record of the wealth of individual experience within a climactic historic event.

Returning to Ireland at the onset of the second world war, Ryan had a small poultry farm and apple orchard in Swords, Co. Dublin (1943–56), and in later years resided at 3 Charleston Rd, Rathmines. Versed in socialist history, biography, and ideological currents worldwide – the subjects of much of his extensive journalism and lecturing – he was long active on the left wing of the Labour Party. He edited Torch, the feisty journal of the party's Dublin region organisation (early 1940s), and was involved in the 1913 Club (1957–8), a discussion group that anticipated Labour's leftist swing of the 1960s. He edited and annotated three volumes of selections from the writings of Connolly: Socialism and nationalism (1948), Labour and Easter week (1949), and The workers' republic (1951); in his introduction to the first title, and in the copious annotation throughout all three, he disputed the assimilation of Connolly into nationalist martyrology at the neglect of his socialism, and asserted his place in the working-class movement internationally. In his most significant contribution to Irish historiography, Ryan collaborated with labour leader William O'Brien (qv) (1881–1968), a close personal friend, in editing the two volumes of Devoy's post bag (1948, 1953), compiled from the voluminous correspondence of John Devoy (qv), which remains a valuable research guide to the Fenian movement in Ireland and America. His last works were a selection from The 1916 poets (1963), and the posthumous The Fenian chief: a biography of James Stephens (1967), reestablishing the historic importance of a neglected revolutionary conspirator.

Ryan's biographic approach to historical writing encouraged a ‘great men’ perspective, paradoxically inconsistent with his socialist commitment. While the bulk of his work has been superseded by the primary research of subsequent academic historians, it nonetheless holds an important place in the development of modern Irish historiography, being among the first attempts at an extensive, interpretative, and dispassionate study of the separatist movement. While his own ideological perspective often intrudes, his appetite for accuracy in detail and fairness in assessment was notable for one working so close to, and as an actual actor in, wrenching, divisive, and emotive events. Writing for a popular audience, in his mature work he revised certain of the shibboleths and sentimentality of official nationalist myth that his own earlier work had helped to generate. A gentle, erudite man, whose favourite recreation was bookshop prowling, he was generous in his assistance to fellow researchers. Ryan married (1933) Sarah Hartley, from northern England; they had no children. He died after a long illness at Baggot St. hospital, Dublin, on 23 December 1964. His papers are deposited in UCD archives.