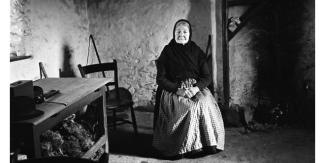 Sayers, Peig (‘Peig Mhór’) (1873–1958), storyteller, was born in Vicarstown, Dunquin, Co. Kerry, one of thirteen children of Tomás Sayers, storyteller and small farmer, and his wife Peig (née Ní Bhrosnacháin). She was baptised 29 March 1873 in Ballyferriter, Co. Kerry. Of English protestant descent on her father's side, the family had converted to catholicism during her grandfather's generation. Her parents had moved to Vicarstown from Ventry, Co. Kerry, six months before she was born, as nine of their children had died there and her mother had hoped that the change would bring the family luck. She learned many of her tales from her father, who had recounted a substantial number to Jeremiah Curtin (qv). At the age of six she attended the local national school in Dunquin, where she was taught by Seán Ó Dálaigh, receiving her education through the medium of English. At the age of fourteen she entered domestic service in Dingle, where she remained for four years until her health failed. Her elder siblings had emigrated to the USA and she also had hoped to follow them when the fare for her passage was sent to her by her friend Cáit Jim, but when it did not arrive she was forced to enter service for a second time. She was deeply unhappy with her second mistress and finally returned home to her parents.

She married (13 February 1892) Pádraig Ó Gaoithín (Peatsaí Flint), twelve years her senior, from the Great Blasket Island and was to spend the next fifty years on the island. Her marriage was arranged, and (according to her account in Peig) she had never set eyes on her future husband until the night the match was made. A different version appears in another account of her life, Beatha Pheig Sayers (1970), written by her son Mícheál Ó Gaoithín (qv) (‘Maidhc file’), which stated that Peig had seen her future husband beforehand and had fallen in love with him. Life on the island was harsh, and of her ten children only five survived. Three died in infancy, her daughter Siobhán died of the measles at the age of eight, and her son Tomás was killed in 1920 when he fell off a cliff while gathering heather. Her husband, who had suffered ill health for a long period, died shortly afterwards. When her surviving children emigrated permanently to America she decided to live with her blind brother-in-law Mícheál, who had helped the family after the death of her husband. Her son Mícheál returned to live with her on the island when his health failed.

Encouraged by two visitors to the island, Máire Ní Chinnéide and Léan Ní Chonnalláin, to record her life story, she dictated it to her son Mícheál as she could neither read nor write Irish. The work was edited by Ní Chinnéide and appeared under the title Peig .i. A scéal féin in 1936. It was an immediate success, and shortly after its publication it was added to the leaving certificate examination curriculum, where it remained until 1995. It is regarded as a classic along with the works of the other Blasket authors Tomás Ó Criomhthain (qv) and Muiris Ó Súilleabháin (qv). Her style inspired writers such as Seán Ó Riordáin (qv) and Seán Ó Tuama (1926–2006). The work won the Duais an Chraoibhín award in the 1937 Oireachtas na Gaeilge literary competition. Peig was awarded the prize on the island on 15 August 1937 and she was also crowned queen of the island on the same occasion. A further work, Machtnamh seana-mhná, dictated to Mícheál and also edited by Ní Chinnéide, was published in 1939. This was translated into English by Séamus Ennis (qv) under the title An old woman's reflections (1962) and Peig was translated into English by Bryan MacMahon (qv) in 1970. Both works provide important insights into the social and cultural life on the Great Blasket Island. Some critics believe that Mícheál's personality and style had a significant influence on both texts.

Peig had an unrivalled command of the spoken Irish language, and visitors came to her from all over Europe to learn Irish. She was on friendly terms with Robin Flower (qv), who described her gift of storytelling: ‘She is a natural orator, with so keen a sense of the turn of phrase and the lifting rhythm appropriate to Irish that her words could be written down as they leave her lips, and they would have the effect of literature with no savour of the artificiality of composition’ (Flower, 49). Kenneth Jackson (qv), a student of Robin Flower, collected stories from her in 1938, and these were published in Béaloideas, viii (1939). Seosamh Ó Dálaigh collected 360 stories from her between 1942 and 1952 for the Irish Folklore Commission. These remain unpublished. The scholar Heinrich Wagner (qv) also collected a number of stories from her.

Peig and Mícheál left the Great Blasket permanently in 1942, moving to Vicarstown under the government's scheme of resettlement to the mainland. In 1947 Séamus Ennis and Seán Mac Réamoinn (1921–2006), along with the Radio Éireann mobile recording unit, recorded over an hour of her recounting stories. She died 8 December 1958 in Dingle hospital and is buried in the new cemetery in Dunquin.