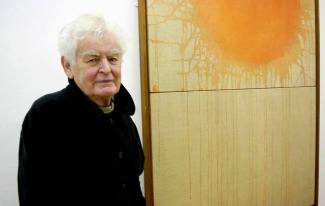 Scott, Patrick (1921–2014), artist, was born Percy Smyth Scott on 24 January 1921 in Kilbrittain, Co. Cork, to Percy Smyth Scott, a gentleman farmer, and his wife Eileen (née Tusker), daughter of an agent of the Bank of Ireland. He was the youngest of four children (two girls and two boys) and was called Pat from infancy due to his being christened on 17 March, St Patrick’s Day. During childhood he suffered for an extended period from chronic gastritis (inflammation of the lining of the stomach) and was kept at home while the older children were sent away to school. He lived on the family farm of several hundred acres at Kilbrittain until the age of twelve when he was sent first to Monkstown Park Preparatory School in 1933, then to St Columba’s secondary school in Whitechurch, Co. Dublin, in September 1935. Art was not taught at the school, but one progressive teacher created a studio space for those boys who wanted to pursue it, and there Scott began painting what he termed ‘imaginary landscapes’.

After school he was due to be articled to an architect in London, but his plans were changed by the outbreak of war. He stayed in Dublin and enrolled to study architecture at UCD (1939–44) with financial help from family friend ‘Aunt Linda’ Parbury, his maternal aunt Jane’s partner (who had also supported his secondary education). UCD’s small architecture department was in disarray during his time there as its lead professor R. M. Butler (qv) died in 1943 after a prolonged illness and a new professor was not appointed until the end of Scott’s final year. He claimed there were no books in the library bar three or four on the pioneering modernist architect Le Corbusier: ‘so we were all mad fans’ (‘Patrick Scott on Michael Scott’, 1995).

While at university Scott mixed in theatrical and artistic circles, the latter enlivened by the presence of pacifist expatriate artists from London and continental Europe during the war years. His involvement with the avant-garde White Stag group greatly informed his early painting. Led by artists Basil Rákóczi (qv) and Kenneth Hall (1913–46), the group members were proponents of ‘subjective art’ which encouraged self-expression and aesthetic experimentation. Scott’s first solo exhibition was held at the White Stag Gallery on Lower Baggot Street in November 1944. The works were in the ‘naive style’ during what Scott termed his ‘Grandma Moses period’, after the influential contemporary American folk artist. One reviewer of this first exhibition called Scott’s paintings ‘poor jokes in good frames’ (Golden boy, 2003).

Scott’s work appeared alongside the two founders of the group in the 1945 book Three painters (Rákóczi, Hall, and Scott), helping to promote it to a wider audience. He was not, however, able to support himself as an artist and that same year joined architect Michael Scott’s (qv) eponymous practice, working for him in a variety of capacities for the next fifteen years while continuing to develop his skills as a painter, print maker and tapestry artist. Perhaps his most significant undertaking for Michael Scott was to co-design the Le Corbusier-inspired office block portion of Busáras in Dublin, as well as designing the complex’s mosaiced areas. In 1953 Michael Scott and Louis le Brocquy (qv) established Signa Design Consultancy, and Patrick Scott became one of its lead designers. In that role he designed the orange and black livery of CIÉ trains (reportedly inspired by his tortoise-shell cat, Miss Mouse), posters, record sleeves, book jackets, Grafton Street’s Christmas decorations and even stage sets. After his departure, Scott was still frequently commissioned to provide artworks for major projects of Michael Scott’s architecture firm, by then the partnership Scott Tallon Walker.

Scott’s career as an artist began to gain momentum toward the end of the 1950s. In 1958 he was one of five artists selected to represent Ireland at the Guggenheim International Award exhibition, his painting ‘Woman carrying grasses’ was purchased by the Museum of Modern Art in New York, a first for a living Irish artist. He participated in the 1959 Irish Exhibition of Living Art which championed expressionist and avant-garde art, presenting another painting from his Grasses series (‘Girl carrying grasses’). In an Irish art context, the painting’s cool, simple symmetry was a radical departure and divided critics. Anne Crookshank (1927–2016), then keeper at Belfast Museum and Art Gallery (now Ulster Museum), attempted to purchase Scott’s painting, making headlines in the Belfast press when it was roundly rejected by the Belfast Corporation. Scott’s other paintings for the Living Art exhibition included ‘Deserted racecourse’ and ‘Building operation, sundown’, a stark and striking architectural work inspired by his first trip to New York in 1955.

As a self-taught artist, Scott approached his work with a beginner’s mind, constantly experimenting across a range of media. In the early 1960s he undertook some architectural work at St Clerans, the Georgian house of film director John Huston (qv) at Craughwell, Co. Galway, and found the inspiration on his cross-country train journeys to create a series of atmospheric landscape paintings of the Bog of Allen and the wild Atlantic using tempura paint on damp, unprimed canvases. He followed this ‘Bog paintings’ series with his ‘Devices’ cycle, featuring dripping or fissured and fractured circles of tempura as a ‘kind of protest … against the endless testing of nuclear weapons of destruction’ (Golden boy, 2003). Despite their devastating subject matter, Scott described his ‘Devices’ paintings as having a ‘meditative’ quality – a theme that would dominate his work. Influenced by the American painter Morris Graves (1910–2001), who lived in Ireland during the 1950s and befriended Scott, he developed an interest in Zen Buddhism and its related aesthetic, which informed his signature ‘gold paintings’ from the mid-1960s onward. These works used simple geometric forms in gold leaf and tempera paint, often presented vertically on large unprimed canvases. Scott also began to create large-scale tapestries in the mid-1960s thanks to commissions from Scott Tallon Walker. His first tapestries, woven at the Aubusson workshops, Tabard Frères et Soeurs, France, continued his ‘Devices’ theme. He had many tapestry commissions for, among others, the Bank of Ireland headquarters on Baggot Street; the European Parliament, Strasbourg, and St Paul’s school, London.

During the 1970s and early 1980s he produced further series of works titled Pyre, Object and Fount, created limited edition silk screen prints and ‘rainbow rugs’ for the retail shops of Kilkenny Design Workshops, and a series of Japanese-inspired large folding screens with simple geometric designs. In contrast to his controlled, symmetrical style, Scott produced what he called ‘whip drawings’ over a period of years from the mid-1970s. These were made using ink-soaked rags attached to a cane and whipped onto paper. Scott was made an honorary member of the RHA in 1980 and the first major retrospective exhibition of his work was held at the Douglas Hyde Gallery in 1981.

During the 1980s he travelled to China and Japan, the former as part of a trade mission for Kilkenny Design, on whose board he sat (1969–87). In tribute he created artworks including ‘Chinese landscape’ (1986) and a series of paintings of Mount Fuji. He further expressed his preoccupation with Zen in his May 1991 exhibition ‘Paintings and tables for meditation’ at the Taylor Galleries in Kildare Street, which featured tables of ash wood that were both functional and could be adjusted for the purpose of meditating in front of – with circular mandala designs on the upright table tops used to focus the sitter’s attention.

Scott continued to work steadily throughout the 1990s, and in 2002 the Hugh Lane Municipal Gallery of Modern Art in Dublin staged a major retrospective of his work, which then went to the Crawford Municipal Art Gallery in Cork. A year later a documentary about the exhibition and Scott’s life titled Patrick Scott: golden boy (2003) was released. In 2007 specialist publishers Stoney Road Press produced a fifty-edition boxed set of seven handmade original Patrick Scott prints called Meditations. A member of Aosdána since 1983, Scott was presented with a torc and given the title saoi (sage) in 2007 by President Mary McAleese, considered the highest honour that can be bestowed upon an Irish artist. The highly illustrated Patrick Scott was published by Liberties Press in 2008, featuring a biographical essay by Irish Times visual arts critic Aidan Dunne.

A deeply private person, Scott was always intolerant of art jargon and reluctant to explain the meaning behind his work. In an interview given to the Irish Times in 2013, he responded to questions about his use of gold leaf by saying simply: ‘I liked the look of it’ and admitting ‘I’m very bad at talking about all that’ (Irish Times, 9 Feb. 2013). He enjoyed a steady homelife: in 1944 in Dublin he had met actor Pat McLarnon, who was working at the Gate Theatre with Hilton Edwards (qv) and Micheál MacLiammóir (qv), and the two lived together for the next half-century until McLarnon’s death in 1997. Scott purchased a mews house on Baggot Lane in the early 1960s, followed by the neighbouring house a few years later, knocking through to create one property that was both home and studio. He also owned a farmhouse and studio in Ballynabrocky, near Blessington, Co. Wicklow. In October 2013 at the age of ninety-two Scott entered a civil partnership with his partner Eric Pearce, a furniture designer.

Patrick Scott died on 14 February 2014 in Ballsbridge, Dublin, just a few days before the opening of the largest exhibition of his work to that date, titled ‘Patrick Scott: Image Space Light’. Shown across two venues, Visual in Carlow and Irish Museum of Modern Art (IMMA) in Dublin, the exhibition considered Scott’s career as a Gesamkunstwerk (a total work of art), looking at the interdisciplinary nature of his creative output spanning architecture, painting, drawing, textiles and furniture design. Scott donated his body to the RCSI, and a memorial celebration was held on 6 April 2014 in the Great Hall at IMMA. To mark the centenary of his birth, An Post released a souvenir sheet of stamps featuring Scott’s gold paintings in January 2021.

He is considered one of the first Irish artists to employ pure abstraction in his painting – abandoning the use of depth perspective and light and shade to create a minimalist, modernist aesthetic. His works feature in the permanent collections of IMMA, TCD and the Hugh Lane Gallery in Dublin, NUIG, the Gulf Oil Corporation, Pittsburg, Pennsylvania, the Ulster Museum, Belfast, and the Museum of Modern Art, New York.