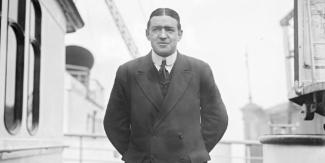 Shackleton, Sir Ernest Henry (1874–1922), sailor and Antarctic explorer, was born 15 February 1874 at Kilkea House, Kilkea, Co. Kildare, second child and eldest son of Henry Shackleton, gentleman farmer and later a physician, and his wife Henrietta Letitia Sophia, daughter of Henry John Gavan of the RIC, later inspector-general of constabulary in Ceylon. His father's family was descended from Abraham Shackleton, a quaker who moved from Yorkshire to Ireland in the early eighteenth century. In 1880 the family moved to Dublin, where his father had entered TCD to study medicine, and in 1884 they moved to London. His father's first practice in Croydon failed, but he later established a successful practice in Sydenham and lived at Aberdeen House, West Hill. Ernest's early education took place at home under a governess, and after a period at Fir Lodge Preparatory School he entered Dulwich College in 1887.

Deciding on a career in the merchant marine, he joined the White Star Line as an officer cadet in 1890 and served on the Hoghton Tower, a square-rigged ship that worked the South American run. In 1894 he joined the Shire Line and qualified as a first mate (1896) and a ship's master (1898). Transferring to the Union Castle Line, he served as third officer on the Tintagel Castle, which, after the outbreak of the second Boer war in 1899, was chartered to carry troops to South Africa. In 1900 with his co-author, Dr W. McLean, he published O.H.M.S. (1900) describing his experiences in these operations. In 1901 he was commissioned as a lieutenant in the Royal Naval Reserve.

During the previous few years, however, he had grown increasingly bored with life in the merchant marine and, seeking some outlet for his energies, had volunteered his services for the national Antarctic expedition in September 1900. Ambitious and seeking to make his fortune, he had cultivated useful contacts including Llewellyn Longstaff, one of the major sponsors of the expedition, while also trying to raise his profile with the Royal Geographical Society (RGS). In February 1901 he was appointed as third officer to the national Antarctic expedition under the command of Commander (later Capt.) Robert Falcon Scott and sailed for the Antarctic on the Discovery on 31 July 1901. Also among the crew were Hartley Travers Ferrar (qv) and Tom Crean (qv); Shackleton would serve with Crean again on later expeditions. The expedition was not a great personal success for Shackleton. He found it difficult to deal with Scott's authoritarian manner, and the two men clashed frequently. In November 1902 he took part with Scott and Dr Edward Wilson in what became known as the ‘southern journey’, the party reaching 82° 28' south, then the farthest distance south that any party had travelled. Troubled with ill heath, he was invalided home in March 1903.

In 1904 he was appointed secretary of the RGS (1904–5); he unsuccessfully stood as a liberal unionist candidate for Dundee in January 1906. In an effort to improve his financial situation, he became involved in a Glasgow engineering works but all the time was planning to return to the Antarctic, this time in command of his own expedition. In 1907 he announced his plans to make another attempt on the South Pole while also exploring the limits of the Ross Barrier and King Edward Land, christening his venture the ‘British Antarctic expedition, 1907'. Following months of fund-raising, he departed for the Antarctic in the Nimrod in August 1907. Setting up base at McMurdo Sound in early 1908, a party reached the summit of Mount Erebus on 10 March 1908. In January 1909 another party, under Professor T. W. Edgeworth David, reached the South Magnetic Pole. Shackleton led a party, made up of Lt Jameson Boyd Adams, Frank Wild, and Eric Marshall, in an attempt on the South Pole, reaching 88° 38' S on 9 January 1909, only ninety-seven miles (156 km) from the Pole and beating Scott's ‘furthest south’ by 360 miles.

Hailed as a national hero on his return to England in March 1909, he received a CVO and a knighthood and was awarded the gold medal of the RGS and the Livingstone gold medal of the RSGS. Perhaps most welcome, however, was the decision of parliament to vote him £20,000 to defray the costs of the expedition. He also published The heart of the Antarctic (London, 1909) and went on a lecturing tour of Europe and America. Despite the fact that the Norwegian explorer, Roald Amundsen, had reached the South Pole in December 1911, Shackleton determined to return to the Antarctic with the intention of exploring the Weddell Sea, Graham Land, and Victoria Land. Also planning to mount a transpolar expedition, he had completed preparations when war broke out in 1914. (Such a traverse over Antarctica was not carried out till 1958.) He offered the admiralty the use of his ships, Endurance and Aurora, for the war effort but was told to proceed with the expedition.

In practical terms the Antarctic expedition of 1914 was a total failure, reaching none of its proposed objectives. Yet in many ways it came to symbolise Shackleton's great skill as an explorer and leader of men. Endurance was beset by pack ice on 19 January 1915 at 76° 30' S, 31° 30' W, and in October the ship began to be crushed by the pressure of the ice, the crew finally abandoning ship on 27 October. (Endurance sank on 21 November 1915.) Initially installing his crew in camps on the ice, Shackleton realised that they must make an attempt to reach land and, after dragging the ship's boats overland to the open sea, the company sailed for Elephant Island, which they reached on 15 April 1916. Yet, despite being on solid land, another problem faced Shackleton and his crew as he realised that no relief ship was likely to come looking for them on Elephant Island. He decided to sail to South Georgia for help and, leaving Elephant Island on 24 April 1916 in one of the ship's boats, the James Caird, began an epic open-boat journey of over 800 miles (1287 km). The other crew members on this voyage were Tom Crean, Tim McCarthy (qv), Harry McNeish, John Vincent, and Frank Worsley. Following a harrowing seventeen-day journey through rough seas, they reached South Georgia on 10 May 1916, thanks largely to Worsley's superb skills of navigation. On arrival in South Georgia, his party had to face yet another problem. As they had landed on the west side of the island, Shackleton, Crean, and Worsley now had to cross the mountainous interior of the island, without the use of any specialised mountaineering equipment, in order to reach the whaling station at Stromness. After a hazardous thirty-six hour journey they reached the whaling station on 20 May 1916. Shackleton then threw himself into organising the expedition to rescue the men on Elephant Island. After three failed attempts, he finally succeeded in reaching the island and rescued the rest of the party.

A lecture tour of South America followed and then, with the rank of major in the army, he served as the director of equipment and transport with the British North Russian Expeditionary Force (1918–19). Resigning his commission in February 1919, he set about writing South (London, 1919), an account of the Endurance expedition, and was awarded the OBE (military) in the same year. In September 1921 he departed for the Antarctic once again, sailing in the Quest. The purpose of this expedition was to explore the area around Enderby Land. The Quest put into South Georgia on 4 January 1922 and on the following morning (5 January 1922) Shackleton, who had suffered from asthma and heart problems throughout his polar expeditions, suffered a massive heart attack and died. His remains were put aboard a ship for England but, in accordance with his wife's wishes, were returned to South Georgia, and he was buried at the whaling station cemetery at Grytviken on South Georgia. On 2 March 1922 a memorial service was held in St Paul's cathedral, London, and was attended by George V and Queen Mary.

During the course of his explorations Shackleton had been awarded numerous honours including an honorary LLD from the University of Glasgow (1914) and the Polar Medal with three clasps. Foreign orders and decorations included the French Légion d'honneur (1909), the Crown of Italy (1910), the Russian Order of St Anne (1910), the Royal Crown of Prussia (1911), and the Chilean Order of Merit. The Shackleton Inlet and the Shackleton Ice Shelf in the Antarctic were named in his honour. There are also two mountains which were named Mount Shackleton in his honour: one in the Canadian Rockies and the other in Greenland. A fine statue of Shackleton, by Charles Sargeant Jagger, was later placed outside the RGS in Kensington Gore, London. There is also a Shackleton display in the museum in Athy, Co. Kildare, and a memorial plaque outside 35 Marlborough St., Dublin, the house where he lived as a child. His remarkable qualities of leadership have more recently come to the attention of the business world and have been the subject of seminars and publications.

He married (1904) Emily Mary, daughter of Charles Dorman, solicitor, of Wadhurst, Sussex; they had two sons and one daughter. The main repository for his journals and papers is the Shackleton Memorial Library of the Scott Polar Research Institute in the University of Cambridge. There is a small collection of his papers in the RGS, while Dulwich College has a collection of material relating to him. In November 2005 The Royal Navy survey ship HMS Endurance travelled to Antarctica to commemorate the sinking of Shackleton's Endurance and to search for the remains of the ship.