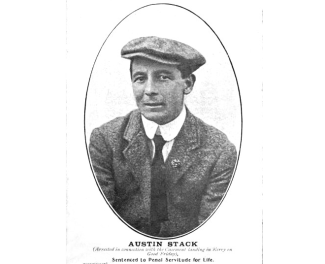 Austin Stack on a postcard issued after the Easter rising, 1916
Copyright
Public domain

Stack, Austin (1879–1929), revolutionary, was born Augustine Mary Moore Stack on 7 December 1879 in Tralee, Co. Kerry, third among eight children of William Moore Stack, well-known Fenian and Land League leader, and Nanette Stack (née O'Neill). Two sisters, Beatrice and Nora, preceded him and Nanette, Teresa, Josephine, Nicholas, and James came after him. He was educated at the local CBS. Stack began work (1894) in the solicitor's office of John O'Connelly, LLD, eventually becoming the senior clerk; later – until he was dismissed in 1915 because of his Volunteer activities – he was income-tax collector for the Dingle and Caherciveen areas. By 1903 his family, with the exception of his brother Nicholas, had emigrated to Philadelphia. Under the influence of his father, Stack joined the local Young Ireland Society and the local branch of the Irish National Foresters, and was a keen student of Irish history.

In early life, however, his real enthusiasm was for sport. He became a member and later secretary of the town's Pioneer Club gymnastic team. Appalled at the Cinderella status of Gaelic football and hurling, he co-founded the John Mitchel club in Tralee and became its secretary. The remarkable success of this club led to the general reorganisation of the Gaelic Athletic Association in the county. Besides his flair for organisation Stack was a regular member of the county football team from 1902 until he had to retire from the game, due to injury, in 1908. He served as secretary of the Kerry GAA county board (1904–8) and as chairman (1914–17). Later he was a member of the Munster and central councils. He was among those who urged the revival of the Tailteann games (Aonach Tailteann), which took place in 1924, 1928, and 1932.

Stack was not solely interested in the GAA and football from 1900 to 1913. He was an active member of the Gaelic League and was sworn into the IRB in 1908 by Cathal Brugha (qv). By 1909 he was the IRB's chief or county centre for Kerry and was to remain so until 1916. At the time he was a member of the Tralee Liberal Club and the Irish Club, which had been founded by local curate Charles J. Brennan to promote a knowledge of Irish cultural traditions. With his colleagues in the IRB Stack ensured that the meeting on 10 December 1913 to establish the Volunteer movement in Tralee was a success. There was a considerable overlap between the Volunteer companies and the town's three football clubs, and gradually, owing to his popularity as a Kerry football star and his contacts in the administrative side of the GAA, he was generally acknowledged as the leader of the Tralee Volunteers. He was also much older than the other members of the Tralee corps. But the crucial factor in his rise to the leadership of the Volunteers, not only of Tralee but of Kerry, was the hidden influence of the IRB.

When visiting Tralee on 27 February 1916 Patrick Pearse (qv) informed Stack that plans had been prepared by the IRB's military council for an insurrection, that arms were to be landed at Fenit pier on Easter Sunday/Monday, that the Tralee Volunteers were to be responsible for this operation, and that the landed arms were to be used firstly to arm the Kerry Volunteers and then to be distributed to the Clare, Cork, Galway, and Limerick Volunteers. Subsequently Stack secretly and meticulously prepared for the operation. However, unaware that the Aud was arriving three days earlier than the scheduled date (23 April), he failed to make contact with it. His carefully prepared arrangements were further upset by the unexpected arrival of Sir Roger Casement (qv) on Banna Strand on Good Friday morning and his subsequent arrest. That evening Stack, on the pretext of wishing to consult a comrade detained by the RIC, walked into the police barracks and was arrested.

On 16 June 1916 Stack was sentenced to penal servitude for life for his involvement in the rising. A year later, with all the remaining Irish political prisoners in England, he was released from prison. Back in Kerry he set about reorganising the Volunteers and promoting membership of Sinn Féin. He was also active in the successful campaign to have Éamon de Valera (qv) and William T. Cosgrave (qv) elected in the Clare East and Kilkenny city by-elections. In August 1917 he was rearrested and committed to Mountjoy jail. He led a strike demanding prisoner-of-war status for himself and his comrades. They then went on a hunger-strike which resulted in the death of Thomas Ashe (qv), owing to forcible feeding. Stack went on two further hunger-strikes, and eventually he and his comrades were released temporarily in November 1917. By this time he had been elected joint secretary of Sinn Féin and to the executive of the Irish Volunteers. He further enhanced his high profile by helping to defuse a number of hunger-strikes in which Sinn Féin prisoners were involved. At the end of March 1918 he was appointed deputy chief of staff of the Volunteers. During the following month he was active in the campaign against the extension of conscription to Ireland. In May 1918 he was arrested once more and transferred to Crumlin Road jail in Belfast, where he, as ‘prison commander’, and seventy other Sinn Féin prisoners were involved in serious disturbances and a hunger-strike. While in jail Stack was returned unopposed as MP for Kerry West in the general election of December 1918. In April 1919 he was transferred to Strangeways prison, Manchester, whence he escaped (October) with others.

From the end of November 1919 until January 1922 Stack was minister for home affairs in the cabinet established by Dáil Éireann. He set about establishing arbitration courts on a national scale; his ultimate aim was to establish a legal system that would supplant that of the British administration in Ireland. Between the Anglo–Irish truce in July 1921 and March 1922, these ‘republican courts’ functioned with great effectiveness. As 1922 progressed, and with the handing over by the British of the legal machinery of the state to the Free State government, they were rendered superfluous and were formally abolished in October 1922.

Stack was close to Cathal Brugha and shared his antipathy to Michael Collins (qv). After the truce in 1921 Stack, who had served as deputy chief of staff in the IRA until August 1920, was one of those who accompanied de Valera to London for talks with Lloyd George, when he supported de Valera's rejection of the British settlement terms. For Stack the Anglo–Irish treaty was a disaster. Between its signing (6 December 1921) and the outbreak of the civil war he was one of its principal opponents, doing all in his power to prevent it from being ratified by Dáil Éireann, and later campaigning against it not only in Ireland but among Irish-American supporters of Sinn Féin in the USA. Stack supported the anti-treaty forces during the civil war, becoming their ‘director of finance’. In October 1922 with other anti-treaty TDs he set up a ‘republican government’ in which he was minister for finance. He was captured by Free State soldiers in April 1923 towards the end of hostilities, and was imprisoned until July 1924. In the meantime he had been returned as Sinn Féin TD for Kerry and Limerick West. Intermittent hardship and hunger-strikes, especially his last one in Kilmainham jail, left him in poor health. None the less, on his release he busied himself with the welfare of republican prisoners. As minister for home affairs in the ‘republican government’ he attempted to revivify the republican courts. He helped to organise the Sinn Féin ard-fheis in November 1924, at which he was reelected joint secretary. In March 1925 he intervened to prevent Sinn Féin becoming involved in land agitation in south-east Leinster. Then in May he travelled to Irish centres in the north of England and in Scotland to encourage support for Sinn Féin and to try to end bitter factionalism between it and the Irish Self-Determination League.

In December 1925 Stack unsuccessfully proposed that de Valera lead his abstentionist colleagues into Dáil Éireann to defeat the settlement negotiated under the auspices of the boundary commission. When de Valera and his supporters split from Sinn Féin (March 1926), Stack, as joint secretary, continued to be a major figure in the party. The establishment of Finna Fáil seriously damaged the party, which could put forward only fifteen candidates in the general election of June 1927. After the eleventh count Stack retained his seat in Kerry and Limerick West. In another general election (September 1927) Sinn Féin, owing to lack of funds, was not able to put forward candidates, and thereby Stack's political career ended. He continued, however, to be involved with Sinn Féin and the ‘republican government’. From 1926 onwards he had begun to attend law lectures in Dublin. He became ill with appendicitis and died 27 April 1929 at the Mater hospital, Dublin; he was buried in Glasnevin cemetery. A portrait by Leo Whelan (qv) is in the Municipal Gallery of Modern Art, Dublin.

On 10 August 1925 he married Winifred Una Gordon, the widow of an RIC inspector; he had stayed in her house while on the run in 1920.