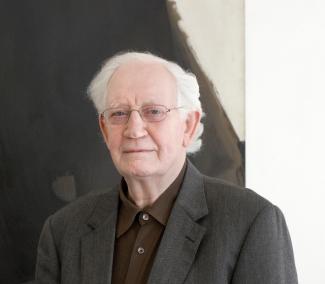 Tallon, Ronald Joseph (‘Ronnie’) (1927–2014), architect, was born on 19 March 1927 in Dublin to Michael Tallon, a shopkeeper, and his wife Jenny (née McDermott). He was the second eldest of eight children (four boys and four girls) and grew up on Griffith Avenue, Drumcondra. After attending a local national school, he went to the Irish language secondary school Coláiste Mhuire on Parnell Square.

Interested in painting, Tallon took night classes at the College of Art during his last two years at school, but rather than pursue a career as an artist, he took a degree in architecture at UCD, graduating in 1950. During the holidays, he worked with Peppard and Duffy architects, and after university joined the Office of Public Works under Raymond McGrath (qv). In 1952 Tallon shared prize money of £300 with two other entrants for his petrol station design in the Irish Shell architectural competition. He was recruited to Michael Scott’s (qv) eponymous firm in 1956, and in 1958 was elevated to partner alongside Robin Walker (qv), precipitating a name change to Michael Scott and Partners; the name Scott Tallon Walker (STW) was adopted in 1975 following Scott’s retirement.

Michael Scott had a gift for spotting young talent and his firm was at the cutting edge of modernist architecture in 1950s Ireland when Tallon came on board. Scott himself had achieved international acclaim and a Royal Institute of Architects of Ireland (RIAI) gold medal with his design for Busáras (Áras Mhic Dhiarmada, 1953) in Dublin. Robert Walker brought with him invaluable experience gained working with the Swiss-French architect Le Corbusier, an early pioneer of modern architecture, and like Tallon was a devotee of the American works of the former Bauhaus director, Ludwig Mies van der Rohe (Michael Scott and Partners/STW’s early work is often simply described as ‘Miesian’). Tallon’s architecture also drew inspiration from Louis Sullivan, the American architect known alternately as the ‘father of modernism’ and the ‘father of skyscrapers’, and the Katsura Imperial Villa in Kyoto, Japan: a thoughtful integration of building and landscape was a key feature of Tallon’s best-known work.

One of his first major projects for Michael Scott was as lead architect on the new Abbey Theatre (1958–66). Though opinion was split on the design, the opening of the modern new theatre in 1966 heralded the beginning of an exciting period in the Abbey’s history.

The late 1950s also saw the beginning of a decades-long relationship between Michael Scott and Partners/STW and RTÉ. Tallon was tasked with developing the ‘master plan’ for the broadcaster’s headquarters at Donnybrook, Dublin. Working on the presumption of ongoing expansion of the network’s offering, Tallon’s Mies-inspired television centre building (1961) used modular building design with an easily removable facade, allowing for seamless extension as the need arose. The master plan was also sensitive to its environment, placing the buildings within a landscaped campus. Tallon clinched his first RIAI gold medal (1959–61) for this work. In the late 1960s Tallon also developed the ‘master plan’ for the integrated 300-acre UCG campus, which included the building of major new faculties and facilities.

The firm was awarded a consecutive RIAI gold medal (1962–4) for the Tallon-designed GEC factory, Dundalk, Co. Louth, which despite this accolade is one of Tallon’s least-celebrated works. Also in 1964 Tallon was elected an RIAI fellow and his Church of Corpus Christi opened in Knockanure, in the parish of Moyvane, Co. Kerry. Considered the first fully modern church in Ireland, it was described by Tallon as: 'A church of our time, built in materials of our time, bricks, concrete and glass' (Irish Press, 22 Apr. 1964). The single-celled church was designed to a simple plan with concrete brick walls, a flat roof of exposed concrete on T-beams with no pillars, and front and rear glass chancel walls. It featured work by important artists of the day: Imogen Stuart provided the cross, Leslie MacWeeney the stations of cross and Oisín Kelly (qv) a carved teak screen. Throughout his career, Tallon championed the work of Irish and Ireland-based artists and encourage Michael Scott and Partners/STW clients to purchase their work.

Another of Tallon’s landmark designs, the P. J. Carroll’s factory in Dundalk, opened to excited praise in 1969. Placed in a landscaped setting fronted by a reflective pond, the glass-wrapped, modular-built factory featured specially commissioned sculptural work by Gerda Frömel (qv), and interior artworks including Louis le Brocquy's (qv) first Táin tapestry. (Tallon had previously designed a studio (1961) for le Brocquy and his wife Anne Madden at 'Les Combes', a villa near Carros, Alpes-Maritimes). STW would again work on the Carroll’s building, renovating it for the Dundalk Institute of Technology (DKIT) in the 2000s, and be awarded various accolades including 'best conservation/restoration project' by the RIAI in 2011.

With Peter Doyle, Tallon designed the celebrated Bank of Ireland headquarters at 50–55 Baggot Street, Dublin. The modernist office complex consists of three blocks and a plaza, constructed in two phases between 1968 and 1978. It is one of only a few twentieth-century Irish buildings to have protected structure status; granted in 2010, Dublin City Council’s conservation department considered it the city’s finest example of the Miesian style. Again, the plaza showcases important sculptural work: the yellow steel ‘Reflections’ by Michael Bulfin (b. 1939) and ‘Red Cardinal’ by John Burke (1946–2006), while the interior featured Irish art curated by Tallon. The complex was sold to beef tycoon Larry Goodman in 2012 for a reported €40 million and, after redevelopment by STW, was taken over by Shire Pharmaceuticals (Takeda) in 2017 and renamed ‘Miesian Plaza’.

Tallon’s gift for large-scale planning led to STW being commissioned in late July 1979 to put in place the ‘physical arrangements’ for the visit of Pope John Paul II with a mere eight weeks’ lead time (Irish Independent, 19 Aug. 2018). In that short timeframe Tallon developed and implemented the facilities to accommodate an anticipated one million people (the final number was estimated at 1.25 million), including logistics for the flow of people, seating for thousands of clergy, water supplies, drains, electricity and telephone lines, as well as constructing an altar and a suitably impressive backdrop (for which he chose a massive 35m steel cross atop a stepped stone platform). So successful was he in creating an outdoor cathedral to accommodate the enormous crowd, Tallon was awarded a papal knighthood for his efforts and afterwards was often contacted for advice by other papal event organisers. In August 2018 the now grassy mound and cross were the site of the mass given by Pope Francis during his two-day visit, attended by a vastly reduced number of people (around 132,000 according to the Office of Public Works). The ‘papal cross’ was initially intended as a temporary structure and planning permission was never sought nor granted, but it remains in place.

Tallon took on an ambitious restoration project in 1984, preparing the Guinness Hop Store building to house that year's Rosc art exhibition. As well as tastefully conserving the building’s structure, his specially designed modern staircase earned particular praise. In an unusual turn of events, Tallon was appointed to select the Irish artists to participate in the exhibition after a dispute arose with the jury first tasked with the selection (they were asked to select ten, but chose twenty-two artists instead). His selection had its detractors, but it was generally agreed that the exhibition was a great success.

In 1989 Tallon co-created a piece of public art ‘Tulach a’ tSolais’ at Oulart, Co. Wexford, with sculptor Michael Warren (whose Gorey studio he had previously designed in 1980). A bisected tulach or burial mound, it commemorates the United Irishmen's uprising of 1798. Warren would also supply ‘Wood Quay’ the large wooden sculpture evoking the prow of a Viking ship at the main entrance to the Dublin civic offices. Tallon took over as lead architect on the controversial civic offices project at Wood Quay for the second phase of its development (1992–5). Under Tallon, Sam Stephenson's (qv) bunker-like, phase-one office towers were integrated into an expanded campus which gave more consideration to the street-front experience, as well as more consideration to workers, the public and the community in the layout of communal areas and gardens.

Tallon undertook only a small number of residential projects, perhaps most notably his own Foxrock home, Tallon House (1970). An elegant and simple modernist statement in steel, concrete and glass in a lush landscaped-garden setting, it was awarded the 1971–3 silver medal for housing by the RIAI. The house was put on the market with an asking price of €3.75 million in mid-2021. Cantilevered over the river Dargle, Tallon’s remarkable floating garden room known as ‘Goulding summerhouse’ near Enniskerry (completed 1973, restored 2000) was built for Basil Goulding (qv), while O hEocha House (1974) in Galway was designed for the family of Colm O hEocha, the former president of UCG. It was also put on the market in mid-2021 (for €1.2 million), promoted as a Tallon-designed rarity.

Having become chairman of STW upon Michael Scott’s retirement in 1975, and after Robin Walker’s subsequent retirement in 1982, Tallon led the firm well into the 2000s. His last major project was the design of the multi-award-winning Aviva stadium at Lansdowne Road, working jointly with stadium architects, Populous. It was officially opened in May 2010, when Tallon was eighty-three. Of his long career Tallon commented: 'I've never looked on it as work … To me, it's a way of life; I'd be lost without it' (Irish Times, 27 Jan. 2001).

Tall, soft-spoken and unassuming, Tallon was often overshadowed by his more gregarious colleagues, particularly Michael Scott. His enormous talent and contribution to the Irish architectural landscape was acknowledged in 2010 when he was the recipient of the inaugural James Gandon medal for lifetime achievement from the RIAI. At the ceremony, RIAI president Paul Keogh stated, ‘The linking of the name of Ronnie Tallon with James Gandon in this award reflects the probability that Tallon may be Ireland’s greatest architect since the 18th century’ (RIAI.ie, Gandon medal page).

In 1953 Tallon married Nora Vize (d. 2017), daughter of Colonel Joseph E. Vize and Rosanna Vize of Ardkeen, Wicklow. The couple had one son and four daughters together, who in turn produced twenty-two grandchildren. Their son, Michael, would follow his father into architecture and become managing director at Scott Tallon Walker.

In addition to his papal knighthood, Tallon was knighted by the Equestrian Order of the Holy Sepulchre of Jerusalem in 1990. He was awarded an honorary LLD from the NUI (1990) and served on the board of the Gate Theatre for many years from the 1980s. His interest in art continued throughout his life and he amassed a valuable home collection.

Ronald Tallon died on 22 June 2014 at the age of eighty-seven. A funeral mass was held at Our Lady of Perpetual Succour, Foxrock, followed by a private burial at St Patrick’s cemetery in Enniskerry, Co. Wicklow, on 25 June. At the time of Tallon’s death his RTÉ campus was being exhibited in the Irish pavilion of the Venice Biennale (7 June to 24 November 2014). Scott Tallon Walker continues to trade under the name of its pioneering former directors.