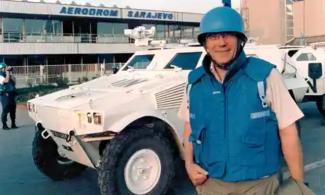 Thornberry, Cedric Henry Reid (1936–2014), human rights lawyer, journalist and UN official, was born on 22 June 1936 at 14 Ardmore Park South, Belfast, the elder son of (William Henry) Laylee Thornbury, headmaster of Lurgan Model School, and his wife Lila (née Watson). Cedric was raised in an open-minded Church of Ireland environment and attended Finaghy Primary School and then Methodist College (1948–54), Belfast, where he was active in student drama and was head boy. He won a local authority scholarship and studied law (1953–8) at St Catharine’s College, University of Cambridge, graduating BA in law (1957) and LLB (1958). In 1959 he qualified as a barrister at Gray’s Inn, London, and taught law at St Catharine’s College, Cambridge (c.1959–60).

He was a research fellow at the British Institute for International and Comparative Law, and from 1960 a lecturer in constitutional and international law at the London School of Economics (LSE), regularly publishing articles in leading journals such as Modern Law Review; he was also a contributing editor to Public Law and to International Law Reports. During the 1960s, he worked on preparations for the British Digest of International Law with the eminent barrister Lord (Hartley) Shawcross (1902–2003), who had been a prosecutor at the Nuremberg trials (1945–6). Taking a particular interest in the then novel area of international human rights law (then largely ignored in UK universities), Thornberry pioneered its teaching at the LSE. In 1964 he published a Fabian Society pamphlet calling for legislation to rectify the variable and discriminatory qualification requirements for Commonwealth citizens and legal aliens. The same year, he and Andrew Martin (a fellow member of the British Society of Labour Lawyers (BSLL)) drafted a legislative bill creating a new criminal offence of racial hatred in a public place. This did not become law but Thornberry and Martin, along with other legal experts closely affiliated with the Labour government, influenced the debate that gave rise to the Race Relations Act (1965) which established the Race Relations Board. Although regarded as timid by critics (the Board lacked the power of subpoena or to initiate civil legal proceedings), the act was welcomed by Thornberry, who believed that it established useful legal mechanisms to combat racism and discrimination. Thornberry was an unsuccessful candidate for the Labour Party in the Conservative stronghold of Guildford at the March 1966 general election.

In 1967–8 he was secretary to a committee established by the BSLL inquiring into religious discrimination in Northern Ireland and worked closely on the legal rights of political prisoners with Lord Chancellor Gerald Gardiner, whom he greatly admired. On 29 January 1967 at the International Hotel, Belfast, he was present at the founding meeting of the Northern Irish Civil Rights Association and took out an Irish passport that year. A member of the executive of the UK National Council for Civil Liberties, he participated in a range of human rights and anti-racism campaigns over the next decade. His expertise led to him being employed as a special correspondent for the Guardian (1967–74) covering international human rights issues, and his journalism also appeared in The Times, Belfast Telegraph and other papers. In October 1967 (in the Guardian) he was the first journalist to publish allegations of torture perpetuated by the Greek ‘colonels’ who led the military coup of April 1967, and he was refused entry to Greece in April 1968.

His journalism and advocacy did much to publicise the importance of the European Convention on Human Rights (drafted in 1950 by the Council of Europe). He pleaded mostly before the European Court of Human Rights (ECHR) in Strasbourg, successfully representing litigants against the UK in cases addressing freedom of expression and obscene publications, the corporal punishment of school children, the rights of Irish prisoners in UK jails, and in a case opposing judicially sanctioned ‘birching’ in the Isle of Man. Also at the ECHR, Thornberry represented Scandinavian governments in torture cases against the Greek regime (before it withdrew from the court in 1970) and the UK National Council for Civil Liberties in its challenges to anti-terrorism legislation in 1976. After the August 1971 introduction of internment in Northern Ireland, Thornberry argued publicly that the Nuremberg principles made governments accountable to international human rights law. Observing that Britain was a party to the European Convention on Human Rights, he asserted ‘I am by birth an Ulster Protestant, whose family in Belfast has – in common with countless others – suffered senseless and barbaric depredation there. Yet this should not excuse inhumanity in our name’ (The Times, 4 Nov. 1971).

Representing Amnesty International, he was a legal advisor to the South West African People’s Organisation (SWAPO), monitoring the trials (1973–4) of SWAPO leaders in Windhoek, Namibia. With international pressure mounting on South Africa to relinquish its mandate over the country, Thornberry joined the UN in 1978 to assist planning for Namibian self-determination and in 1982 was again involved in trying to lay the foundations for an independent democratic state. As director of the office of the UN special representative during the UN Transition Assistance Group (UNTAG) programme in Namibia (1988–90), he played a leading role in the country’s transition to independence (achieved in March 1990) and participated in the drafting of the Namibian constitution. He was chief of staff and deputy to the chief of mission, the Finnish politician Martti Ahtisaari, and liaised with politicians, ambassadors and paramilitaries to prepare for free elections, effectively deploying his legal and political skills to draft documents, forge bureaucratic alliances and establish the new administrative apparatus. In overseeing the establishment of Namibian independence, he was also credited for promoting, unusually at the time, a positive gender balance amongst both UN and government personnel. UNTAG, though more an exercise in decolonisation than peacekeeping, was widely regarded as one of the most successful UN missions. Thornberry later recounted this experience in A nation is born: the inside story of Namibia’s independence (2003).

In addition to his work in Namibia, he served two periods as director for administration and management (1986–8; 1990–92) at the UN headquarters in New York City. He was also deputy special representative (1981–92) of the UN secretary-general in Cyprus and senior advisor (1982–4) to the UN military observation mission in the Middle East. In March 1992 he was appointed director of civil affairs of the UN Protection Force (UNPROFOR) in the former Yugoslavia charged with coordinating UN policing and humanitarian efforts. Based in Sarajevo, he focused on liaising between major international NGOs, the UN and the UN High Commission for Refugees in Bosnia. After his appointment as assistant UN secretary-general (1993–5), he became deputy chief of mission UNPROFOR, mediating between warring factions as Serb forces first attempted to partition the predominantly Muslim Sarajevo into ethnic districts and then laid siege to the city. As the conflict escalated in scale and intensity, he was responsible for an increasingly unwieldy UN mission. Thornberry managed over 39,000 UN civil staff across the former Yugoslavia and represented the UN secretary-general Boutros Boutros-Ghali, liaised with NATO military command and interceded in complex multiparty negotiations between warlords, ethnic militias and international NGOs. In 1992 he mediated the Serb handover of Sarajevo airport, facilitating the UN’s largest humanitarian airlift to date. He also negotiated the passage of, and personally headed, an aid convoy that relieved the devastating siege of Mostar in August 1993; footage of the convoy was broadcast around the world. Thornberry was the leading spokesperson for UNPROFOR and was generally an effective communicator and a shrewd observer. Caught between warring local forces and discord between the western powers and Russia – which stymied the UN Security Council – he noted wryly that UNPROFOR was burdened with ‘responsibility but not authority’ (Washington Post, 23 Aug. 1993). He later held that various Croats, Serbs and Muslims were all responsible for appalling events during this period and in 2008 was a witness at the International Criminal Tribunal on the Former Yugoslavia at The Hague.

Throughout the 1990s Thornberry was widely consulted on global peacekeeping and humanitarian initiatives, and worked with a variety of international organisations, mediating conflicts, peace negotiations and ceasefires. He contributed to the negotiations enabling Cambodia’s first free elections (1992–3) and reported to the UN on developments in Somalia from February 1994. In 1994 he was made an honorary fellow of the LSE, was a visiting professor from 1995 at the Centre for Defence Studies, King’s College London, and was awarded an honorary doctorate by the Open University (1996). He was the inaugural holder (1997–8) of the Tip O’Neill chair in peace studies, based at the International Conflict Research Institute (INCORE), Magee College, Derry. In the late 1990s, working as a consultant on the NATO ‘Partnership for peace’ programme, Thornberry urged Ireland’s participation, citing the example of Switzerland, also a neutral country.

An able communicator and effective advocate, Thornberry had a significant influence on the evolution of international human rights law, both as a legal theorist and practitioner. In his UN career, which reflected the organisation’s expanding role in the last quarter of the twentieth century, he made a notable contribution to the stabilisation and governance of troubled regions undergoing political and ethnic strife. He was also a perceptive critic of the UN’s failings, especially the inadequate resources and muddled mandate bestowed upon UNPROFOR by the Security Council. His contributions to the theory and practice of international affairs, ranging from legal and institutional analyses to professional memoir, were presented at numerous international academic colloquia and published in various newspapers, journals and edited collections.

Thornberry, who was married and divorced four times, settled near Limassol, Cyprus, in the mid-1990s. He died on 6 May 2014 in Guildford, England, and his remains were cremated at Guildford Crematorium. He was survived by his five children, one of whom, Emily Thornberry MP, was a leading member of the UK Labour Party shadow cabinet from 2010; a son predeceased him in 2011.