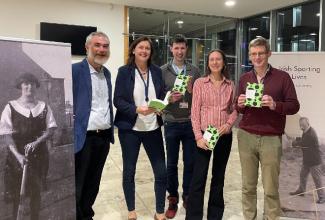 We are very grateful to Dr Katie Liston for permission to publish the speech (lightly edited for publication) she delivered at the launch of Irish sporting lives, edited by Terry Clavin and Turlough O’Riordan and published by the Royal Irish Academy in November 2022. The book was launched at a conference on 'Irish sporting lives', organised by Dr Conor Heffernan and Dr Carol Osborne, and generously hosted by Ulster University on 11 and 12 November.

Let me extend a warm welcome to you all here at Ulster University’s newly opened Belfast campus. As many of you know, Dr Conor Heffernan, who is one of the two organisers of our conference, joined the School of Sport here at Ulster and he has already made a positive impact on our students and to our research in the social sciences and humanities of sport. We are proud of this research and delighted to host the conference.

Irish sporting lives (ISL) features sixty sporting lives selected from over 500 currently included among the 11,000-plus entries in the Dictionary of Irish Biography (DIB). I’m especially envious of the authors of the various entries in this collection, who had the very great satisfaction of working on these sporting lives. But I must say I’m not at all jealous of ISL editors, Terry Clavin and Turlough O’Riordan, who had the mammoth task of deciding which sixty to include.

But this book is more than a simple reproduction of entries from the original DIB. Some are abridged versions of the originally published entries, in order to make room for sporting aspects of the biography. Yet others have been expanded or entirely rewritten and ISL also features six new additions, five of whom are women. A special acknowledgement is due to the authors of these entries who are breaking new ground in recovering stories of women in sport, but also to Terry and Turlough for ensuring around one third of the entries in ISL are women and to their tenacity in securing images to accompany each entry. These images bring the stories to life; they capture conventions of the time and in so doing add much to the reader’s experience.

You will be delighted to know that I don’t have four hours to explain my position on sporting biographies. What, then, can be said about sporting biography in a few minutes that could do even some justice to this collection? Here I take inspiration from my colleague and friend, Professor Joe Maguire, and his introduction to Sport worlds: a sociological perspective (2002).

Maguire notes that when writing about art, Janet Wolff in The social production of art and Howard Becker in Art worlds confront the romantic and mystical notion of art as ‘the creation of “genius”, transcending existence, society, and time’ (p. xiii). A similar set of mystical notions exists in the world of sport. Like art and music, sport is marked out by a series of ‘conventions, taboos, power struggles’ and divisions of labour (p. xv). As researchers, curators and writers, we, like Wolff and Becker, are required to engage our critical sensitivity in order to make sense of sporting lives, past and present.

This collection gives us an opportunity to do that in ways anew. What do I mean by that? While the performances of Irish sportspeople today, such as Katie Taylor or Rory McIlroy, are very different from those of Mozart, they are all perceived as uniquely gifted individuals, exceptional people even, who stand outside of and apart from general social structures and life. McIlroy was videoed at home at a young age hitting golf balls smoothly into an open washing machine in the kitchen. And Katie Taylor was training with and against her male counterparts, and more often than, her own peers in order to break new ground in women’s boxing. There were pathbreakers for her as this collection shows – May Hezlet, Elizabeth Le Blond, Mabel Cahill, Lady Heath all held their own in mixed sex competition – but the products of the sheer brilliance of Taylor and McIlroy today, ‘and the recognition and reception of their performances, are deeply connected to social processes’ (Maguire, p. xiv). Because they are alive and at the peak of their careers, arguably, not only do we feel that we can engage with them directly in ways that were not possible some ten years ago, but also, we literally live their careers. It can be difficult then to discern what is sport today, and what is not, without reference to other worlds.

Writing about Mozart, Norbert Elias noted that the musician’s individual fate, his destiny as a unique human being and an artist, was heavily influenced by his social situation. In his case musicians of his time were dependent on the court aristocracy. We can see then how difficult it is to elucidate – as a biographer or sociologist tries to do – the depth and breadth of the lives of people, no matter how incomparable that individual’s personality or achievements may be, unless we place them in their social context. Every genius – and his/her brilliance of the time – is part of a web or network of social relationships that shape the recognition and reception accorded to their genius.

The ability of the sportsperson is not limited simply to the individual, because the production, distribution and reception of sporting lives are social processes. And in this collection, you will see the lives of athletes, organisers, promoters, and sports trainers too. As you read it, you will be offered insights into the social patterns that lie behind the perceived individualism of these people, their performances, and their contributions to sport. We learn about the growing networks that sustained their achievements; the extensive relations with people within the sports world and with those from other facets of social life; the conventions, innovations and challenges that are captured within the biographies, and the temporal, comparative and spatial dimensions.

It is fitting in some ways that we are launching the collection here in Belfast given the connections between many of the sporting lives to Ulster. We read about Alex Higgins, May Hezlet, Joey Dunlop, Clara 'Ma' Copley, George Baillie, George Best, Dave Gallaher, Ken Goodall, Jack Kyle, Bill McCracken, Elisha Scott, Molly Seaton, Jim Smith. And when considering the range of social forces that shaped these sporting lives, we cannot avoid the ways in which identity is writ large throughout – in terms of class and social status, gender, and national identity. We can see that the Irish in the broadest sense were, and remain, a diverse lot, so complex that even Freud himself was perhaps loathe to analyse. In the time periods captured here, we move from the early nineteenth century and the reign of Queen Victoria over the United Kingdom of Great Britain and Ireland, through to the establishment of Northern Ireland and then the creation of an Irish Republic. In my own work with Joe Maguire on athletics, a range of descriptors were used, visibly, by British and international sports officials to describe these Irish. We were ‘troublesome’, as World Athletics officials described some, but we are also ‘troubled’ in the more general and objective sense: troubled by the pace of social, economic, political and cultural changes, by the uneven democratisation of sport and its consequences, the waning of Empire and by a narrowing of what it meant to be Irish amidst the throes of nationalistic fervours of one form or another.

As Paul Rouse notes in the Introduction to Irish sporting lives, it is striking the number of subjects who either served in the British military or had close personal or family associations with it. This diversity is also reflected in entries for members of the Gaelic Athletic Association, who not only participated in the struggle for independence but at the same time held views that opposed the GAA ban on membership of those who played so-called foreign games or who were in the British army or police forces on the island. As with some of the top sportspeople today, many Irish men and women in this collection could hold complementary identities at once, neither undermining the other. And they too had to negotiate setbacks, injuries, retirements, financial and other personal challenges.

No doubt history felt slow in many respects for those whose sporting lives are explored here but, I dare say for us reading the entries today, it will appear much faster in certain respects. But I urge you to dampen that temptation. Because to know ourselves, in all our diversity and complexity, we have to face ourselves and what happened in the past. And while it is important to let go of history in some places, at other times and in other places it is entirely appropriate to keep one eye on the past, as we do here, and with great sensitivity and maturity.

Since there is a choice about what to include and what to omit in the stories that we tell about sport, and in how we tell them, these sporting lives are especially important. They help us to understand not only how things were different, but also the legacies which remain in the way we see the world and ourselves. We can better understand how we came to be the way we are, and therefore to see many possible futures. Given the destabilising effects of Brexit on Irish–British relations as a whole, and on this part of the world especially, the capacity to envisage and deliver better futures has never been more important.

It was C. Wright Mills’ invitation to us to grasp the interplay between history, biography and social structures. Having read much of this collection already, it should cause us to take stock of official and authoritative notions of culture, progress, what is defined as sporting success, and why I, for one, cannot wait to set aside some more time to read even more of this collection. Irish sporting lives is an important tool that we can use in teaching the current generation and helping them appreciate that today’s opportunities are directly connected to yesterday’s struggles. Congratulations to everyone involved in this endeavour.

Terry Clavin joined the Dictionary of Irish Biography project in 2006 and researches, writes and edits DIB entries, primarily on twentieth century and early modern figures. He has published hundreds of entries in the DIB, latterly with an emphasis on business, sport and journalism, and also helps select DIB entries for inclusion. Terry is co-editor Irish Sporting Lives (RIA, 2022) with Turlough O'Riordan.