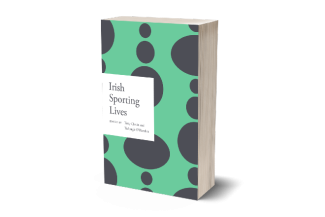 We were delighted to publish Irish sporting lives this month. The latest in the Dictionary of Irish Biography’s (DIB) ongoing Lives series and edited by us (Terry Clavin and Turlough O’Riordan). The book presents a curated selection of sixty sporting lives found in the DIB, including revised and brand new entries. We commissioned six new biographies, two others were completely rewritten, and the remainder were expanded to varying degrees. Each of the sixty lives is accompanied by a portrait image, and the introduction was composed by one of Ireland’s foremost sports historians, Prof Paul Rouse of University College Dublin.

When making our selections for inclusion in the book, we first had to review the 540 or so sports-related DIB entries. The next step was to take a deep dive into the latest historical research on Irish sport, which has blossomed since the DIB was first published in 2009. On top of that, we were of course conscious that vast databases of historical newspapers and the ever-increasing volume of digitised public records and other historical material allows biographical details to be uncovered far more quickly than before. These resources enabled us to incorporate additional details for many of the less well-known lives collected in the volume.

As for the selection itself, there are certainly household names (Alex Higgins, Jack Kyle, Christy Ring, Joey Dunlop, Kay Mills and George Best) that suggested themselves. But from the outset we sought to incorporate a selection of lives from less well-known sports. The spread of the lives – across disciplines, geographic region, and time – was constantly reviewed as the list was whittled down.

Gaelic games – camogie, handball, hurling and football – are well covered in twelve lives. Soccer (more popular in recent times) and boxing are also well represented, with rugby, golf and equestrian culture (horse racing, show jumping and hunting) following in the middle of the field. Tennis and motor racing each present a few lives while hockey, cricket, archery and cycling all have their place in the volume. There are quite a few Olympians from the early twentieth century and an ‘all-rounder’ – Kevin O’Flanagan – who embodies a type of sportsperson more prevalent in past decades.

While the collection includes quite a few grand champions and supreme athletes, the sportsmen and sportswomen chosen were not necessarily the best or most successful at their sport. The selection was also governed by a desire to provide readers with material that was engaging and informative. Hence, the inclusion of colourful characters such as Moss Keane, Dan Donnelly and Lady Heath, as well as those who have intrinsically interesting careers such as Mike McTigue, Mabel Cahill, Shay Elliott and Brede Arkless. There are also a handful of infamous figures, most notably the tennis champion and convicted murderer Vere Goold. With any sporting endeavour the requirement soon emerges for rules of play and organising structures, so founders, promoters and reformers are given their due, along with trainers, coaches and managers.

Notable themes emerged, including the often quite radical evolution experienced by various sports since the nineteenth century. Many of the sportswomen and sportsmen included played more than one field or ball sport, often finding interesting ways to circumvent the Gaelic Athletic Association’s ‘ban’ on foreign games. Others struggled to reconcile their desire to earn a living from sport with the stern Corinthian ideals that prevailed well into the twentieth century. The exploits of the Irish diaspora – driven mostly by emigration to the anglophone world – emerge in the presence of baseball, cricket, rugby and Australian Rules Football players. Less happily, the sixty lives exhibit considerable pathos, as poverty, alcoholism and depression frequently emerge following retirement from the sporting arena.

Gender norms, conspicuously represented in the sporting attire worn by sportswomen, are another major theme. The experience of sporting pioneers such as May Hezlett, Mabel Cahill, and Elizabeth Le Blond, was conditioned by oppressive societal conventions governing dress and behaviour which required them to innovate and adapt in their sporting pursuits. Yet women more than held their own in motor racing (Taylour), mountain climbing (Arkless and Le Blond) as well as in croquet (Coote) and archery (Hill-Lowe). The history of women’s soccer in the twentieth century is bookended by the careers of Molly Seaton and Anne O’Brien, and gains contemporary resonance given the October 2022 qualification of the Football Association of Ireland women’s team for the FIFA world cup.

Irish sporting lives is available to purchase online and at all good book shops.

Media related to the book's launches in Dublin and Belfast, as well as radio interviews and press coverage are available here: https://www.ria.ie/irish-sporting-live

Turlough O’Riordan is a long-standing member of the DIB editorial team and is the author of numerous entries, particularly in the areas of architecture, medicine, religion, print culture, science and sport; he also focuses on Irish figures with distinct overseas careers. He is a graduate of University College Dublin (Bachelors in history and politics, Masters in early modern history), University of Cambridge (Masters in European studies), and Dublin Institute of Technology/Technical University of Ireland (Masters in computer science). Turlough is co-editor of Irish sporting lives (RIA, 2022) with Terry Clavin.