The journey of the Cathach 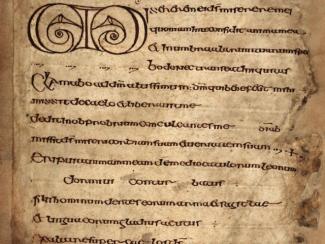 Since 2012, there have been a series of events commemorating the seismic shifts that took place across the island of Ireland between 1912 and 1923. During this ten-year period the foundations for the modern Irish state were laid. Alongside these centenaries another series of anniversaries have occurred which, while not so publicly prominent, are no less important to the course of Ireland’s history. In 2014 historians commemorated the 1000th anniversary of the Battle of Clontarf, where Brian Bórama’s (qv) victory ensured his descendants in the south controlled Irish politics for much of the next century. Five years later, academics marked another event that had a seismic effect on the history of Ireland – the so-called ‘Conquest of Ireland’. In May 2019  a three-day symposium was held in Trinity College Dublin marking the 850 years since Anglo-Norman adventurers landed at Wexford in 1169 at the invite of Diarmait Mac Murchada (qv).

Throughout the year of 2021 a series of events surrounding another, perhaps less contentious, anniversary will occur marking 1500 years since the birth of St Colum Cille, also known as St Columba (qv). This saint contributed significantly to early medieval Ireland’s status as a land ‘of saints and scholars’, from his foundation of the iconic monastery on Iona, and his influential reform of monasticism to the contribution Columban monks have made to medieval artwork and literature. To coincide with this anniversary, the RIA Library is celebrating a manuscript in their collection – the so-called Cathach (Battler) of St Colum Cille. This manuscript, supposedly written by the saint himself, is said to date from 560–600 AD and is the oldest extant Irish manuscript of the Psalter (the Book of Psalms), and possibly the second oldest Latin manuscript in the world. While the Cathach is an extraordinary text that has survived almost 1500 years, the story of its survival is equally interesting and can be charted through some of the lives contained in the DIB.

The origins of the Cathach are controversial: St Finnian (qv) supposedly lent a Psalter to his student Colum Cille who, under cover of night and by a ‘miraculous light’, made a copy of it. According to Colum Cille’s first biographer, Adomnán (qv), Finnian was furious that his work had been copied and claimed ownership of the copy (books being rare and extremely valuable in the sixth century). If true, this dispute would be the first recorded case of copyright infringement in history! The disagreement was brought before Diarmait Mac Cerball (qv), king of Tara, who allegedly judged that, as the calf belongs to the cow who gave birth to it, so too a copy belongs to a book. The fall-out from the dispute supposedly led to the Battle of Cúl Dreimne in CE 561 and Colum Cille’s departure for Iona.

In the aftermath of the battle, the Cathach passed into the hands of the Ó Domhnaill (O’Donnell) clan of Tír Chonaill (modern Co. Donegal), where it earned the name ‘Battler’. According to tradition, when Ó Domhnaill warriors mustered for battle the Cathach was carried clockwise three times around the gathered troops by a holy man, usually a member of the Mac Robartaig clan of Ballintra, for protection and as a rallying point. It was said to guarantee victory in battle. Although the Cathach remained the hereditary possession of the Ó Domhnaill clan, the Mac Robartaigs were its traditional guardians. In the late eleventh century Domnall Mac Robartaig (qv), abbot of Kells and successor (comarba) of Colum Cille, and Cathbarr Ua Domnaill, king of Cenél Lugdach (north Donegal) jointly commissioned a special shrine or cumdach to hold the manuscript, which must have been quite fragile, given its age. The case, consisting of wood faced with silver plate, was made by the master-craftsman Sitriuc Mac Aeda of Kells, known as ‘the Artificer’. He engraved the case with, among other things, a praying monk, a depiction of the crucifixion and birds, beasts and grotesques.

In 1532 Manus O’Donnell (qv), lord of Tír Conaill, compiled a biography of Colum Cille entitled the Betha Colaim Chille. O’Donnell was a fierce defender of his family’s lands and title – he built a castle at Lifford to contain the O’Neills and he led expeditions against neighbouring dynasties such as the MacQuillans – but he was also a great scholar, and five of his Irish-language love poems survive to this day. To write his biography of Colum Cille, O’Donnell claimed to have collected ancient books from all over Ireland and had them translated from Latin and medieval Irish into modern Irish. He then supposedly dictated the book ‘with his own lips’, repeating Adomnán’s assertion that the Cathach was a copy of Finnian’s Psalter made by Colum Cille, and that its creation led to dispute and warfare.

Although O’Donnell ended his days imprisoned by his own son An Calbhach (qv) in Lifford Castle, the Cathach remained safely in the family’s possession for the next century, through the turbulence of Henry VIII’s reign, the Elizabethan wars, the Cromwellian conquest and the Restoration. In 1691, however, the O’Donnells and, by extension, the Cathach, faced a serious threat from the Jacobite wars raging through Ireland. Following defeat at the siege of Limerick in 1691 Colonel Daniel O’Donnell (qv) was among the ‘Wild Geese’ who left Ireland to serve in the French army. He brought the Cathach with him and, while in France, had the outer case refurbished, adding the O’Donnell coat-of-arms and an inscription. Sometime before his death in 1735 O’Donnell, for reasons unknown, deposited the Cathach in a monastery in Flanders, leaving instructions that after his death it should go to whoever could prove they were head of the O’Donnell clan.

Presumably the manuscript, contained in its shrine, remained in the monks’ safe-keeping for the next seventy years or so, because the next verifiable mention of the Cathach is in the early nineteenth-century, probably 1802, when Sir Capel Molyneux presented it to his father-in-law, Sir Neal O’Donnel of Newport, Co. Mayo, although how he came by it is unknown. The family clearly had no idea what treasure they had recovered, however, because the manuscript remained undiscovered until 1813 when the supposedly empty cumdach was opened by the archivist and scholar, Sir William Betham (qv) revealing the thousand-year-old manuscript within. His description of the event is breathtaking: ‘By inserting a wire into it, I felt what I thought were the edges of the manuscript. I ventured to draw out two or three of the holy pins and, lifting up the lid, found the manuscript. But closed it instantly.’ He added that, after opening it, a thin piece of board covered in red leather fell out – probably part of the original binding – and was discarded as being of no circumstance. The manuscript within was in poor condition, Betham stating that ‘it was so much injured by damp as to appear almost a solid mass’. His description of its treatment is bound to send a shiver down the spine of modern archivists: ‘by steeping it in cold water I was able to separate the membranes from each other, and by pressing each separately between blotting paper … at length succeeding in restoring, what was not actually decayed, to a legible state.’ Amazingly the manuscript survived Betham’s ministrations and in 1843 Sir Richard O’Donel presented it to the Royal Irish Academy.

In 1920 the Academy entrusted the Cathach to the British Museum bindery for remedial repairs: the leaves, caked together and cockled, were separated, mounted in paper frames and overlaid with white net. More elaborate repairs were carried out by the expert bookbinder and restorer, Roger Powell, aided by Dorothy Cumstey in 1980–1. The vellum mounts were replaced using pieces of degreased fish skin to join the butted edges, the leaves were assembled in sections, sewn in a zig-zag and bound in English oak boards and the spine was covered in white alum-tawed pigskin. The cumdach was presented to the National Museum of Ireland in the 1930s, while the Cathach now resides in the RIA in a box specially designed to prevent cockling and keep the vellum under pressure, its long journey finally ended.

Dr Niav Gallagher is a medieval historian, specialising in the links between religion and politics in thirteenth, fourteenth and fifteenth century Ireland, Scotland and Wales. She joined the DIB team in 2018, researching and writing biographies as well as curating the database of prospective DIB entries. Niav is co-editor of Irish lives in America (RIA, 2021), a collection of fifty biographies of Irish emigrants to the US, with Liz Evers.