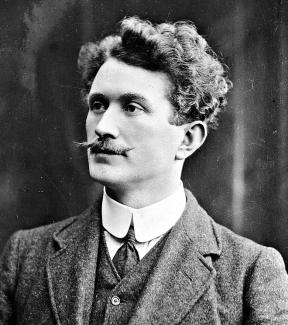 Thomas Ashe, date and origin unknown. From his personal collection.
Copyright
Fair use

Ashe, Thomas (Tomás Ághas) (1885–1917), republican, was born 12 January 1885 at Kinard, Lispole, near Dingle, Co. Kerry, the fourth son in a family of seven boys and three girls born to Gregory Ashe, farmer, and his wife Ellen (née Hanafin). He attended Ardamore national school (1889–1900), where he proved academically promising, and then became a monitor there (1900–5), winning a county scholarship on two occasions. His father, who was well known locally as a storyteller and singer, encouraged his son's scholarly pursuits. The Ashes spoke Irish at their home which became a gathering place for language enthusiasts. In 1913, on Thomas's recommendation, Ernest Blythe (qv) lived with the Ashe family when he moved to Kerry to immerse himself in the language. Ashe joined the Gaelic League while at school, winning a prize at the Dingle féis for a play entitled ‘An puncán’ (‘The Yank’) and becoming a local organiser. He also enjoyed outdoor pursuits and was active in the Lispole GAA, where he met Austin Stack (qv).

Ashe trained to be a teacher at De La Salle College, Waterford (1905–7), where he again excelled. After a brief spell teaching at Minard Castle, Co. Kerry (July 1907 to March 1908), he became a master at Corduff national school near Lusk in north Co. Dublin (March 1908 to April 1916). As a teacher (and school principal) he was both efficient and popular, but his tendency to press his militant cultural and political nationalism upon his pupils brought disapproval from school inspectors and precipitated a visit from the chief commissioner of national education, William Starkie (qv). As a member of the IRB he regularly met other leading brethren, including Seán Mac Diarmada (qv) and Diarmuid O'Hegarty (qv), and in 1913 he also joined the Irish Volunteers. Locally he played a leading role in forming the Black Raven pipe band, participated in amateur theatricals, and was an active member of the GAA. He was a member of the INTO, was sympathetic to the labour movement, and was friendly with James Connolly (qv); his incomplete novel about the life of agricultural labourers in Co. Dublin survives in manuscript. Ashe (unusually for a native speaker of Irish) was prominent nationally in the Gaelic League: he sat on its governing body, the Coiste Gnotha, and was associated with Éamonn Ceannt (qv), Diarmuid Lynch (qv), and others like them who viewed the league as an apt vehicle for extreme nationalism. From February to the summer of 1914 he took leave from his job and travelled to the USA, collecting money for the Gaelic League and (secretly) for the IRB. The progress of this enterprise was halted by Irish-American reaction to the outbreak of the first world war and in particular the support given by John Redmond (qv) to the British war effort.

At some time between October 1915 and the outbreak of the 1916 rising Ashe became commandant of the 5th (Fingal) battalion of the Irish Volunteers, which embraced the companies in north Co. Dublin and formed part of the Dublin brigade. During Easter week he led his battalion in an operation to disrupt communications infrastructure inside and outside Dublin city. At Ashbourne, just inside Co. Meath, they attacked the RIC barracks, killing eleven policemen and capturing a large quantity of arms. This encounter enhanced the military reputations among nationalists of Ashe and Richard Mulcahy (qv). After the general surrender Ashe was tried by a military court and sentenced to death, but his sentence was commuted to penal servitude for life (he was fortunate to have been among the last to face trial). He was imprisoned in England, at Dartmoor and then at Lewes, Sussex, where perhaps he alone rivalled Éamon de Valera (qv) in his influence over the prisoners. While at Lewes he was in regular communication with Michael Collins (qv) and so was better informed about developments in Ireland than many of his fellow prisoners. He consistently urged pragmatic action, arguing that Joe McGuinness (qv) should contest the South Longford by-election in April 1917, and in May that year pressing more hesitant inmates at Lewes to mount a concerted prison protest. This resulted in his transfer to Portland for a month before his release under the general amnesty of June 1917.

On 20 June 4,000 people welcomed Ashe and Stack back to Tralee, Co. Kerry. He was by then president of the supreme council of the IRB and there were those who wished him, rather than de Valera, to contest the East Clare by-election in July. Instead Ashe campaigned strenuously for de Valera and embarked on a summer of meetings and speeches, reorganising the Irish Volunteers and promoting the cause. One speech, in Co. Longford, brought about his rearrest in Dublin (18 August) and prosecution under the Defence of the Realm Act (DORA). He was sentenced to two years’ imprisonment. In Mountjoy jail he was among forty DORA prisoners – including Stack, Fionán Lynch (qv), and Michael Brennan (qv) – who began to protest against their treatment, demanding ‘political prisoner’ or ‘prisoner of war’ status and initiating a hunger strike on 20 September. On 23 and 24 September Raymond Dowdall, the prison medical officer, forcibly fed Ashe; on the morning of 25 September the same operation was carried out by Dr William Lowe, who despite being unfamiliar with the procedure had been hired to assist the overworked Dowdall. Immediately afterwards Ashe collapsed; he died that evening at the Mater Hospital, Dublin.

The authorities, fearing further deaths and violent protests, conceded the prisoners’ demands (29 September). Ashe's death provided Sinn Féin with a prison martyr and a fresh emotional charge. Enormous demonstrations accompanied his lying-in-state and funeral (30 September), which was carefully choreographed by the IRB and was described as ‘even more impressive than the funeral of Parnell’ (Irish Independent, 1 Oct. 1917); Ashe was buried at Glasnevin cemetery. There followed an explosion of propaganda associated with the inquest into his death, at which Tim Healy (qv) acted ‘on behalf of the relatives of the Martyr’ (minutes of the inquest). Ashe – who in life had been handsome, physically imposing, and unmarried – became an icon of republican manhood and sacrifice. It was often noted that he died in his thirty-third year, and his poem ‘Let me carry your cross for Ireland, Lord!’ was published repeatedly. Numerous laudatory ballads and pamphlets appeared, including one by Sean O'Casey (qv), who was a friend, while in February 1919 the chief secretary for Ireland, Ian MacPherson (qv), argued that Ashe's death did ‘more to stimulate Sinn Feinism and disorder in Ireland than anything I know’ (Laffan, 269).

Ashe has been often commemorated, particularly in his native Co. Kerry. In Tralee, Nelson Street was renamed Ashe Street and the county hall (completed in 1928) was named the Ashe Memorial Hall (latterly a tourist office and museum). Youghal, Clonakilty, and Cavan are among the other towns to name streets after Ashe. Numerous buildings and the reception room at Conradh na Gaeilge's headquarters bear his name. A bronze sculpture was set up at Kinard, and De La Salle College and the National Museum hold busts. In 1985 a commemorative stamp, based on a drawing by Seán O'Sullivan (qv), was issued. The library at Dingle, Co. Kerry, incorporates a Thomas Ashe Museum, which holds manuscripts, photographs, memorabilia, and publications. The NLI also holds relevant material, including interesting correspondence on his funeral in the papers of Laurence O'Neill. Ashe's sister Nora (qv) did much to promote his memory and was a major source for his biographers.