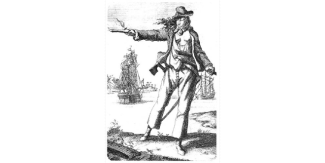 Bonney (Bonny), Anne (c.1700–p.1721), pirate, is thought to have been born in Cork about 1700. While her life story has been somewhat mythologised over time, the lead source about her remains the work of a Captain Charles Johnson (presumed to be the pseudonym of Daniel Defoe), whose A general history of the robberies and murders of the most notorious pyrates (1724) also likely mixes fact and fiction to provide a more rounded narrative.

Several historians name Bonney’s father as William Cormac, a married man, and her mother as his maidservant, but there is no documentary evidence to support this. According to Johnson, she was disguised as a boy during her early childhood to conceal her identity and later, to avoid local censure, Cormac took mother and daughter to South Carolina where he acquired a substantial plantation. Again, there is no evidence to support this assertion despite land-owning in South Carolina being quite well documented for that period. In the second volume of his work, Johnson provided an appendix to the first volume in which he says he received further information on Bonney from her ‘relations’. This new information stated that before May 1719 Anne travelled from the Carolinas to the Bahamas in the company of a woman named Anne Fulworth who acted as her mother. There is quite possibly an element of truth to this tale as a proclamation from governor Woodes Rogers declared ‘Ann Fulford, alias Bonny’ as being a pirate (5 September 1720). According to Johnson, she married a pirate named James Bonney but, when he accepted the king’s pardon in 1718, she joined Captain John Rackham (nicknamed ‘Calico Jack’ in Johnson’s text) and his pirate crew.

Disguised as a man on board ship, Bonney took part in raids off Cuba and Hispaniola and quite possibly bore Rackham’s child during this period. English-born Mary Read (c.1695–1721), also joined the crew. On 5 September 1720 the governor of the Bahamas issued a proclamation reporting the theft by Rackham and his associates of an armed twelve-ton sloop from Providence, which was subsequently used for acts of piracy and robbery. The proclamation was published in the Boston Globe and, the following month, the vessel was intercepted off the Jamaican coast. The crew, including Bonney and Read, were captured and imprisoned in Spanish Town, Jamaica. Rackham and his male accomplices were tried on 16 November and hanged two days later. On 28 November, at a separate trial in Spanish Town, Bonney and Read were tried for piracy. Although both women pleaded not guilty, the evidence of witnesses was incontrovertible. It was claimed that Bonney and Read were neither kept nor detained by force but that they engaged in piracy of their own free will. Eyewitnesses at the trial stated that the two women, both ‘very profligate, cursing and swearing much’, were disguised in men’s clothing, each armed with a machete and pistol and that, as one of the last defenders of the ship, Bonney was very active on board and willing to do anything.

Although pleas of pregnancy saved both women from the death penalty, Read died in prison and was buried in the Jamaican district of Saint Catherine on 28 April 1721. It is unknown what happened to Bonney or her child. Historians have postulated that her well-connected father secured her release and brought her back to Charlestown where she married, became respectable and lived to the age of eighty-four. Johnson, however, finishes his account merely saying ‘What has become of her we cannot tell. Only this we know, she was not executed’ (173).

In the twentieth and twenty-first centuries, Bonney entered popular culture anew. The lead character in the 1951 film Anne of the Indies was loosely based on Bonney, while Bonney and Read’s exploits were dramatised by playwright Steve Gooch in The women pirates (1978). Bonney and Read are also named-checked in the Adam and the Ants song ‘Five guns west’ (1981). In more recent times, Bonney has been a subject of several books, has appeared in the television series Black sails (2014–17), the Anne Bonnie (2014) comic book and as a character in the Assassin’s creed game series.

Phillip Gosse, The history of piracy (1954); Captain Charles Johnson, A general history of the robberies and murders of the most notorious pyrates (1724); Jennifer Uglow, The Macmillan dictionary of women’s biography (1989); John C. Appleby, ‘Women and piracy in Ireland: from Gráinne O’Malley to Anne Bonny’, in Margaret MacCurtain and Mary O’Dowd (eds), Women in early modern Ireland (1991), 53–68; Oxford Dictionary of National Biography (2004); David Fictum, ‘Anne Bonny and Mary Read: female pirates and maritime women’, Colonies, ships and pirates: concerning history in the Atlantic world 1680–1740 (8 May 2016); Tony Bartleme, ‘The true and false stories of Anne Bonny, pirate woman of the Caribbean’, The Post and Courier (21 Nov. 2018)