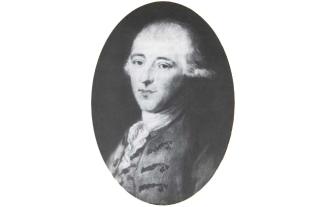 Butler, Pierce (1744–1822), soldier, planter, slaveholder, delegate to the constitutional convention and US senator, was born in Ballintemple House, Co. Carlow on 11 July 1744, the third son of Sir Richard Butler, 5th baronet of Cloughgrenan and member of the Irish parliament, and his wife Henrietta (née Percy), daughter of the mayor of Dublin, Anthony Percy, whose family laid claim to the dukedom of Northumberland, albeit unsuccessfully. Although he enjoyed a privileged upbringing, as the third son of an Anglo-Irish aristocrat Butler was unlikely to inherit his father's lands or titles; thus when he was eleven years old his father purchased a commission for him in the 22nd Regiment of Foot (known later as the Cheshire Regiment) and he entered active service.

By the age of fourteen Butler was a full lieutenant and in command of troops at the Siege of Louisbourg in French Canada in 1758, where he was wounded. The following year he again fought against the French at the battle of the Plains of Abraham. In 1762, when word came that the regiment was being dispatched to Louisiana, Butler took the opportunity to transfer to the 29th Regiment of Foot (known later as the Worcestershire and Sherwood Foresters), then stationed in Ireland. He remained in Ireland until 1765 when the regiment was sent to garrison Nova Scotia, and a year later he was promoted to major, a title he continued to use even after resigning his commission.

Having established his military career, Butler allegedly attempted to elope with a fifteen-year-old South Carolina heiress in 1768, a marriage that was forestalled by the girl's stepfather (ANB, 103). On 10 January 1771 he made a most advantageous match when he married Mary Middleton, daughter of Thomas Middleton, a South Carolina planter and slave importer. On 10 November the same year she inherited Middleton's estates and, through her, Butler now owned vast estates in Toogoodoo, Bull's Island and Hilton Head. The couple went on to have eight children, of whom five survived – one boy and four girls. He also gained significant social and political links to South Carolina's elite through the marriage: Mary Middleton's uncle was Henry Middleton, who presided over the continental congress for several days in 1774, and her cousin was Arthur Middleton, one of the signatories of the American declaration of independence.

Having ended French territorial claims in North America, permanent garrisons were required to maintain British gains. The cost of financing these troops fell upon American colonists and, as unrest spread, the 29th along with the 14th Regiment of Foot were sent to maintain the king's peace in Boston. On 5 March 1770 a detachment from Butler's regiment opened fire on a crowd at the Boston customs house killing five people, in what became the opening shots of the American Revolution. Butler remained in the regiment for a further three years but when they received orders to return to Britain in 1773, he resigned his commission and used the money to increase his landholding significantly. Between 1772 and 1786 he bought almost 10,000 acres in Georgia and South Carolina and he also began to accumulate small coastal ships in order to move his produce more easily.

When war broke out between America and Britain in 1775 Butler joined with several former British officers, such as Charles Lee and Richard Montgomery (qv), in siding with his adopted country. Initially his involvement was administrative rather than military. In 1776 he accepted the post of justice of the peace for Beaufort district, and in 1778 he was elected to the house of representatives for Prince William district, a position he held until 1789. From 1779 onwards, however, his participation was more significant. Early in the year John Rutledge, governor of South Carolina, appointed him adjutant general, a position that carried the rank of brigadier general, and tasked him with organising the state's militia. In retaliation for this betrayal of his oath to king and country, his principal residence at the Eutaw plantation was burned by the British in May 1779 and his name was placed on a proscribed list of rebel officers of both South Carolina and Georgia.

In May 1780 the British captured Charleston and with it most of the state's government and military. Butler, out recruiting for the militia, evaded capture and joined General Gates' army in North Carolina, where he was placed in command of 150 militia guarding British prisoners of war in Salisbury. Although the war was effectively over by October 1781 when the British, under Lord Cornwallis, surrendered at Yorkstown, preliminary peace terms were not signed until November 1782. On 14 December that year Butler brought his family back to Charleston from their exile in Philadelphia. He had suffered significant losses, both financial and physical, during the war: his residence had been burned down, slaves confiscated, ships sunk and crops destroyed. After the Treaty of Paris was signed on 3 September 1783 Butler returned to Europe, ostensibly to see his family in Ireland and enrol his son Thomas in an exclusive school in London, but also to raise loans and open new markets for his produce. He returned to America in late 1785 and does not appear to have left his adopted country again.

For the latter half of his life Butler was deeply involved in American politics. Already a representative in the South Carolina legislature, in March 1787 he was elected one of four delegates to represent the state at the Philadelphia convention, originally intended to redraft the articles of confederation but which ultimately resulted in a new constitution.

Accompanied by the other South Carolina delegates Charles Pinckney, Charles Cotesworth Pinckney and John Rutledge, Butler spoke approximately seventy times at the convention. He also proposed Article IV, section 2, clause 3, known as 'the fugitive slave clause', which stated a 'person held to service or labour in one state … escaping into another, shall … be delivered [back to that] party to whom such service or labour may be due.' It was adopted into the constitution almost verbatim. It is unsurprising that Butler's greatest concern for the new constitution was that it would protect wealth and property, given that he owned such a large number of slaves until his death, and that his heirs did likewise. On 17 September 1787 Butler was one of forty men who signed the constitution of the United States of America, and when the South Carolina House of Representatives met on 22 January 1789 he was elected as one of the first United States senators.

Butler served three terms in the senate: 1789–92; 1792–6, when he resigned and returned to his state, and again from 1802–06, when he completed the term of a colleague who died in office. His name was also suggested as a vice-presidential running mate for Thomas Jefferson in 1796 but that does not appear to have been a serious proposal. In 1816 he was appointed as one of five government directors of the Bank of the United States and, upon completion of his three-year term, President James Monroe expressed 'high respect and sincere friendship' for him (Butler papers, 1 January 1819).

After he retired from politics in 1806 Butler spent a lot of time in Philadelphia where he continued with his business interests, becoming one of the wealthiest men in America. He died at home on 15 February 1822 and was buried in the family vault at the episcopal Christ Church, Philadelphia. Many of the accounts of Butler's life portray him as a contradictory man, one who supported a broad franchise but also defended slavery, a man who was born into aristocracy and wealth but who was fierce in his opposition to monarchy, and a soldier who fought against the French and the British and then spent a lifetime decrying war. He was not contradictory in his central belief, however, in a strong central government that protected the rights of the private citizen. Even so, he found the constitution that he helped to draft flawed, declaring at the end of his life: 'our system is little better than [a] matter of experiment … [and] much must depend on the morals and manners of the people at large' (Soldier-statesmen of the constitution, 76–78).