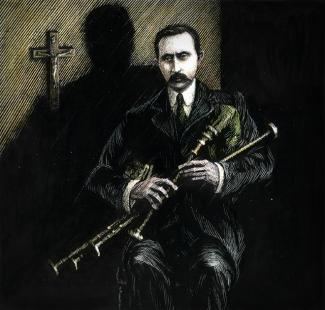 Ceannt, Éamonn (1881–1916), revolutionary and Irish-Irelander, was born Edward Thomas Kent on 21 September 1881 in Ballymoe, Glenamaddy, Co. Galway, sixth among seven children (six boys and a girl) of James Kent (1841–1912), RIC constable originally of Co. Tipperary, and his wife Johanna (née Galwey) (d. 1895) of Co. Cork. In 1883 James Kent was transferred to Ardee, Co. Louth, where Edward attended the De La Salle national school. He was a shy and studious boy, who enjoyed fishing, birdwatching and long walks in the countryside. After five years in Ardee, the family moved to Drogheda, where Edward attended the CBS in Sunday's Gate. James Kent retired from the RIC in 1892 and settled his family in Dublin, at 232 Clonliffe Rd, Drumcondra. Edward went to O'Connell's CBS, North Richmond St., where he was a diligent student, and a keen rugby player and hurler. He did particularly well in his final exams in 1898 and became a clerk in the city treasurer's office of Dublin corporation.

The centenary commemorations for the 1798 rebellion sparked his interest in cultural nationalism, and he began to study Irish, being tutored by his father, who was a native speaker. In September 1899 he joined the Gaelic League and adopted the Irish form of his name (although he was still often known as Kent). He was soon fluent in Irish and teaching classes himself, and was elected to the League's governing body in 1909; he fought a successful three-year battle with the authorities to insist that his son's birth should be registered in Irish. He enjoyed learning languages and in his youth often spent time at Dublin port talking to foreign sailors; besides Irish, he spoke French and German reasonably well. His dedication to Gaelic culture led him to become an accomplished uilleann piper: he spent his holidays travelling throughout Gaeltacht regions collecting old airs and won many prizes at the annual feiseanna for his piping (he also played the flute, tin-whistle and violin). In 1900 he and Edward Martyn (qv) founded the Dublin Pipers’ Club (Cumann na bPíobairí) of which Ceannt was honorary secretary for many years. On 7 June 1905 at St James’ Church, James’ St, Dublin, he married Áine Ní Bhraonáin (Áine Ceannt (qv)), whom he met in the Gaelic League. They lived at 2 Dolphin's Terrace, South Circular Road, Dublin, and had one son, Ronan (1906–74).

A devout catholic, who neither smoked nor drank, Ceannt travelled to Rome in September 1908 with a group of Irish athletes and musicians who were members of the Catholic Young Men's Society to celebrate the jubilee of Pope Pius X. Dressed in a colourful traditional piper's costume (now in the NMI), he played the pipes in a private audience with the pope. During the trip he insisted on conversing with his colleagues only in Irish. He joined Sinn Féin in 1907, and was elected to its national council. He was a regular at separatist demonstrations and organised protests against the visit of George V in 1911. In 1913 he proposed a motion to the Sinn Féin national council that Irishmen should learn the use of arms; he himself had already joined a rifle club and become a crack shot. An effective speaker, Ceannt spoke regularly on political and cultural topics to various nationalist organisations. He was one of the main contributors to An Barr Buadh (March to May 1912), Patrick Pearse's (qv) short-lived militant Irish-language journal, and also wrote articles and songs for An Claidheamh Soluis, the Irish Nation, Sinn Féin, and the Volunteer Gazette, in both Irish and English. Widely read, he had a good knowledge of the social theories of Marx and Engels and was more sympathetic to socialist policies than most of his Sinn Féin colleagues; he was chairman of the Dublin Municipal Officers’ Association and during the 1913 lockout he defended Dublin workers against the criticisms of Arthur Griffith (qv).

Recognising an uncompromising militant, Seán Mac Diarmada (qv) recruited him into the IRB in 1911, and Ceannt assisted with the production of the IRB newspaper, Irish Freedom. He was urged by Mac Diarmada to become a founder member of the Irish Volunteers in November 1913, and with MacDiarmada and Pearse, all key members of the IRB, was elected to the Volunteer committee. As captain of ‘A’ company, 4th Dublin battalion of the Volunteers, he participated in the landing of rifles at Howth on 26 July and at Kilcoole, Co. Wicklow, on 1 August 1914. He was a leading organiser of the conference of separatists held (9 September 1914) in the Gaelic League library at 25 Parnell Square, Dublin, which decided in principle to use the opportunity of the European war to mount an insurrection in Ireland. He voted against Redmond's (qv) nominees to the Volunteer executive (16 June 1914) and, after the Volunteer split (24 September 1914), became a leading member of the Irish Volunteer executive, serving as director of communications and commandant of the 4th Dublin battalion. In 1915 he became a member of the IRB supreme council, and in May 1915 Ceannt, Pearse, and Joseph Plunkett (qv), all regarded as dedicated insurrectionists, were the first appointees to an IRB military committee that became the military council that planned the Easter rising. Ceannt was involved in various subterfuges to keep moderate Volunteer leaders in the dark, such as sending the director of recruiting, Seán Fitzgibbon, to Kerry to supervise an arms landing in the days before the rising.

At a meeting on 18 April 1916 Ceannt was one of the seven signatories of the republican proclamation. During Easter week (24–30 April) his under-strength battalion held the South Dublin Union and its outposts. The Union, close to several British army barracks and controlling one of the main approaches to the city, saw some of the insurrection's bloodiest fighting. Ceannt proved to be an effective and courageous commander who led from the front in several fierce close-quarter actions in the Union's maze of lanes and corridors. His spirit, and that of his vice-commandant, Cathal Brugha (qv), inspired the small garrison of forty-two Volunteers to mount a tenacious defence of their post and hold off repeated attacks from vastly superior British forces. During lulls in the fighting he led his men in saying the rosary. Prepared to fight to the death, he was dismayed to receive Pearse's order to surrender, and reluctantly ordered his men to lay down their arms. When court-martialled at Richmond Barracks (3–4 May), he showed considerable composure and did his best to cast doubt on the prosecution charges, apparently trying to secure an acquittal on technical grounds. Condemned to death, he was executed on 8 May 1916 by firing squad in Kilmainham jail, Dublin, and was buried at Arbour Hill prison cemetery. In his final letter from prison, he regretted surrendering and advised republicans ‘never to treat with the enemy, never to surrender at his mercy, but to fight to a finish’. He believed that ‘in the years to come Ireland will honour those who risked all for her honour at Easter in 1916’ (MacLochlainn, 136).

Ceannt was regarded by many contemporaries as a rather dour and taciturn figure. Not renowned as a poet, political theorist, or arch conspirator, he is probably the least celebrated of the proclamation's seven signatories. However his courage, dedication, and determination were much respected by fellow separatists. Committed to achieving Irish independence through force of arms, he was impatient with the flamboyant oratory and blood sacrifice rhetoric of colleagues such as Pearse. He believed that the rising had a real chance of success and told his wife beforehand that ‘if we last a month the British will come to terms’ (Ryan, 98). Tall, with a stiff military bearing, he was, according to Seán Fitzgibbon, ‘more naturally a physical force man than any of the other leaders’ (cited in MacDonagh, 512).

A portrait by P. H. Marrinan (qv) is displayed at Ceannt Barracks, the Curragh, Co. Kildare. Ceannt Fort in Kilmainham commemorates his defence of the South Dublin Union and the railway station in Galway was named after him in 1966. His brother William Kent, a colour sergeant with the Royal Dublin Fusiliers, was killed in action in France in 1917.