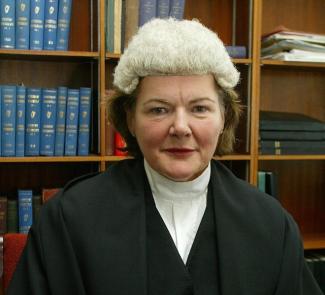 Delahunt, Katherine Mary (‘Kay’, ‘Katryn’) (1956–2015), first female solicitor appointed to the Circuit Court, was born on 28 April 1956, the third of four girls and a boy, to Thomas (Tom) A. Delahunt, director of the Wicklow-based home décor firm S. V. Delahunt & Co, and his wife Annette (née Doyle). Delahunt grew up in ‘Villanita’, the family home in Wicklow town, where politics and business were ever present topics of conversation. In addition to being a well-known businessman, her father served as an independent councillor on Wicklow Town Council, while her grand-uncle, J. T. Byrne, was Wicklow County Engineer. Most Sundays, Byrne and his wife Mairead brought the young Delahunt out for ‘spins’ around the county, where she was introduced to his myriad political friends, exposed to political chatter and shown how the county was being developed.

From an early age Delahunt showed independence of mind: her older sisters were sent to Mount Anville, Dublin, but she refused to move from the Dominican convent in Wicklow town and remained there for both her primary and secondary education. She also had a clear idea of what she wanted to do, reportedly telling her mother at a young age that she intended to become a judge. To achieve that aim, Delahunt studied law at University College Cork (UCC) after sitting her leaving certificate. She graduated in 1977 and spent a further year studying at the law school of the Incorporated Law Society, Dublin. In 1978 she applied successfully for a prestigious stagiaire in the European Economic Community’s (EEC) headquarters in Brussels, where she was affiliated with the European Labour Court. While in Brussels, she was also able to call on the support and guidance of her uncle (through marriage), Conor Patrick Maguire, who had been appointed counsellor in 1973 in the EEC’s Office of the Director of Competition.

When she returned to Ireland in 1979, Delahunt joined Vincent & Beatty LLP, based in Fitzwilliam Square, Dublin, where she remained for the next twenty-two years. An outstanding solicitor, she quickly advanced in the firm: in 1981 she became the first female partner at the age of just twenty-five. In law circles Delahunt developed a reputation as a ‘formidable, bordering on the ferocious’ advocate for her clients. According to former director general of the Incorporated Law Society, Ken Murphy, she was ‘a very sweet person socially, but had a combative style as a solicitor’ (Irish Times, 25 Apr. 2015). Considered by Mr Justice George Birmingham as the ‘leading litigation solicitor of her generation’ (Irish Times, 25 Apr. 2015), Delahunt was a noted advocate in high profile defamation cases, and her clients included former TDs Pat Rabbitte and Eamon Gilmore, and businessman Sylvester Rabbitte. She was also skilled in employment law, and from 1981 was vice-chairperson of the Employment Appeals Tribunal (EAT). In addition to her work as a solicitor, Delahunt supported the liberal side in debates on abortion and divorce during the early 1980s, working behind the scenes with Adrian Hardiman and others to campaign against the eighth amendment in the 1983 referendum campaign.

In 2001 Delahunt made history when she became the first female solicitor appointed as a judge of the Circuit Court, presiding over family, commercial and, finally, criminal cases. Her diligence, familiarity with all aspects of the law, and ability to cut through the fog of the courtroom made her an excellent judge. Her colleague, and fellow judge of the Circuit Court James McCourt, said that her work as a judge ‘went unremarked upon – she didn’t hit the headlines, and that is the sign of a good judge’ (Irish Times, 25 April 2015). In a judicial career spanning more than a decade, Delahunt had only thirty of her rulings appealed, and none of those appeals were upheld. According to her husband Stephen O’Byrnes, that remarkable record was the result of judgements informed by long hours spent agonising over and researching the legal aspects and arguments of each case.

Despite dealing with cases that involved some of the worst of human behaviour, Delahunt retained her compassion as well as judicial balance. At her funeral, her friend Fr Gerry O’Connor quoted a parishioner who had come before her on criminal charges: ‘she slaughtered me, but she seemed to believe in me’ (Irish Times, 25 Apr. 2015). She received letters from parents, grateful that their children had appeared before her and been given a second chance. One of the more high-profile cases that came before her in the Circuit Court was the appeal brought by Leonard Watters, who had been convicted of fabricating a sexual assault story against band manager and X-Factor judge Louis Walsh. When Watters appealed the severity of his six-month conviction in 2012, Delahunt increased the sentence to eleven months, but she suspended the final five on condition he enter an alcohol rehabilitation programme.

In January 2011 Delahunt was diagnosed with breast cancer, and underwent fifteen months of radiotherapy, surgery and chemotherapy. In April 2012 she received the all-clear from her medical team and returned to work at the Circuit Court, but by August of the same year another tumour was discovered. Over the next three years, despite her illness and the debilitating effects of the treatment, Delahunt nonetheless maintained a positive attitude in public; the manner in which she refused to bow to her illness or express self-pity was viewed by those close to her as a hallmark of her character. She died on 1 April 2015 in St Vincent’s Private Hospital, Dublin, and was buried in the Three Mile Water cemetery beside Brittas Bay, Wicklow, after funeral mass in the Church of the Sacred Heart, Donnybrook. She was survived by her husband Stephen O’Byrnes, who she had married four weeks previously, her step-daughters, her sisters and brother. Among the hundreds who attended the funeral were attorney general Máire Whelan, high court justice John McMenamin, former tánaiste Mary Harney and the taoiseach’s aide de camp, Comdt Peter Norton. In a reflection on her contribution to the legal world, former High Court judge Michael Moriarty described her as one of the most accomplished criminal judges in the country, while Michael McDowell, former leader of the Progressive Democrats, described her as ‘the most outstanding solicitor in Dublin in her time’ (S. O’Byrnes, June 2022).