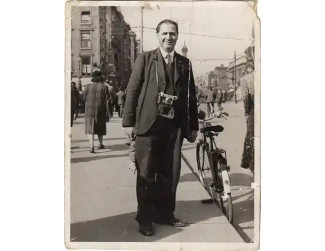 Fields, Arthur (1901–1994), photographer, known as the 'man on the bridge', was born Abraham Feldman on 27 October 1901 at home in Dublin to Ukrainian Jewish parents Malka (also known as 'Molly' or 'Mary'; née Sweed) and Simon Feldman, a draper, of 6 Raymond Street, Dublin 8. He had four brothers: Oran, Jacob, David and Moses, and one sister who died in infancy. Originally from Kiev, Ukraine, his father had been a prosperous rabbi, who, along with his wife and their two eldest sons, had to flee the country in 1891, taking whatever valuables they could manage and leaving 'in the middle of the night in a horse drawn carriage' (The book of Irish Jewry, 2014). The family were part of a mass exodus from the 'pale of settlement' of the Russian empire following the assassination of Tsar Alexander II of Russia in 1881 for which the Jewish population was scapegoated and persecuted. An estimated two million Jews emigrated, largely to the US, between 1881 and 1914, with around 3,500 coming to Ireland, where the pre-1881 Jewish population had been just over 500; the majority settled in Dublin.

While the 'old' Jewish community of Dublin tended to live in the vicinity of Mary's Abbey synagogue on the north side of the city, the new 'foreign Jews' settled around the South Circular Road district (Keogh, 18). The Feldman family lived at various addresses in this area, which became known as 'Little Jerusalem'. The new community was often subject to anti-immigrant and anti-Semitic smears and sometimes attacks. As a consequence, some families, including the Feldmans, decided to change their family surnames to something less identifiably Jewish. They appeared as Fieldman in the 1901 census, eventually segueing into the more neutral 'Field' or 'Fields'. The children with overtly Hebrew-sounding names adopted anglicised versions: Oran became Harry, Jacob became Jack, Moses became Morris and Abraham became Arthur.

Arthur Fields attended the parish school of St Nicholas Without, then Wesley College on St Stephen's Green, before entering the tailoring industry. As a young man he travelled to the US a number of times to visit his elder brother Jack who had a successful real estate career there. He also travelled to England, where his brothers Harry and Morris had settled, and lived himself for a time in Chalkwell, an area of Southend-on-Sea, where he and his brother David purchased a house. In 1934 he met his wife-to-be, Doreen Cracknell (1917–1990) from east London, at a dance in Southend. She was seventeen to Fields's thirty-three when they married and came to live in Dublin, first at Sandymount then settling for the remainder of their married life at 602 Howth Road in Raheny on Dublin's northside. They had one daughter, Norma, and three sons, Bernard, Philip and David. As Doreen was an Anglican, and Fields a largely non-observant Jew, the children were not raised in either faith and were given exemptions from religious instruction at school. (Fields did have a strong personal faith and sometimes celebrated festival days at the Adelaide Road synagogue in Dublin).

While he had a lifelong interest in fashion and was always well turned-out in a suit, tie and hat – Fields found that the tailoring business was not for him and he tried his hand at other trades including butchery and sound recording. He then moved into street photography, a popular and potentially lucrative business, in the second half of the 1930s. O'Connell Street, Westmoreland Street and Grafton Street in Dublin were known as the 'photographic mile', with some sixty active photographic studios in operation at the time that Fields began to ply his new trade alongside numerous other street photographers, all jostling for customers. Fields chose to establish his patch on O'Connell Bridge, with regular forays onto O'Connell Street, particularly at night to photograph young revellers on nights out at the street's many cafes, ballrooms and cinemas. He would approach potential customers and take, or at least pretend to take, their photograph, then ask them if they would like the picture, giving them a ticket for a local studio to pay for the photograph which would then be posted to them. His wife was responsible for photo development (first in a premises in the city, then in a darkroom at home) and posting prints out to customers. In the 1960s Fields changed to using a Polaroid box camera and so was able to give his customers their photographs on the spot.

In the early days of this work, Fields was cautioned for peddling on a number of occasions – but he persevered and was eventually quietly tolerated by the police. Over the years he also had a few minor skirmishes with opportunistic thieves or others tormenting him for the entertainment of their friends, but never suffered serious injury. For nearly half of his fifty-year career on the bridge, Fields would work one side and his older brother David (1897–1956) worked the other. According to Fields's son Bernard, the brothers were making many times the average wage through their street photography (Man on bridge documentary, 2014). The brothers shared an extremely close bond, David lived with Fields and his family in Raheny, and the two spoke Yiddish to each other at home. An avid collector of antiques, David was less of a workaholic than his brother, and would take time off to pursue his interest and spend time with his niece and nephews, whereas Fields tended to work long hours every day of the year including Christmas. David died on 13 June 1956, leaving his younger brother bereft. Fields suffered a nervous breakdown and was given a course of electric shock treatment, before returning to his gruelling work regime on the bridge.

In addition to his work in Dublin, Fields frequently travelled to other parts of the country taking photographs in tourist hotspots such as Bray and Bundoran, as well as attending the annual Spring Show at the RDS and the Ploughing Championships. Despite the public nature of his work, Fields did not have good social skills, nor did he have close bonds with many other people outside his immediate family. He did not attend any of the weddings of his four children, choosing to work instead. He also did not participate in other family occasions such as christenings or birthdays.

Fields finally left his post on O'Connell Bridge in 1988 at the age of eighty-seven. His wife died two years later on 2 April 1990. He continued to live alone at home in Raheny with the help of neighbours and family. Fields died of heart failure in Beaumont hospital on 11 April 1994 at the age of ninety-two. His funeral service was in Glasnevin cemetery followed by cremation there. Many mourners brought photographs that he had taken to the ceremony to share with his family. His death was widely reported in Dublin's media and made the front page of the Irish Times, which described him as 'one of Dublin's best known characters', while the Evening Herald called him a 'Dublin institution for thousands of people visiting the city' (both 15 April 1994). Of his death Declan Kiberd wrote in the Irish Press: 'Those who mourned the Man on the Bridge … may have been lamenting not just their lost youth, but the lost innocence of an era which Arthur Fields in a way symbolised' (19 April 1994).

As well as entering the pantheon of Dublin 'characters', Fields was also a hugely important, if inadvertent, archivist of the city's life. During his fifty-year career as a street photographer from the 1930s to the 1980s he took at least 182,500 photographs – but probably many more – capturing the changing nature of the city and its people. 'Field's photographs chart the huge changes in the city as they passed before him, people in everything from dapper suits to mini-skirts, mohawks to mullets: meeting first loves or proudly showing off firstborns while in the background, the world changed. Nelson's Pillar disappeared; the golden arches of McDonalds materialised' (Ailin Quinlan, Ir. Examiner, 21 October 2017). He also photographed many famous people who traversed O'Connell Bridge or Street including actors Noel Purcell (qv), Gene Tierney, Bing Crosby and Margaret Rutherford, writer Brendan Behan (qv), boxer Jack Doyle (qv) and even a seven-year-old George Harrison.

Fields did not keep any negatives or copies of his images. Therefore the archive exists primarily in homes across Ireland and the wider world. To bring at least some of the images together, the 'Man on bridge' multimedia project was launched on the Late late show on RTÉ in March 2014, asking people to submit their Fields photographs to be archived. It culminated in the release of a book of 250 images and an exhibition of 3,400 photographs at Dublin's Gallery of Photography later that year. A documentary also titled Man on bridge was broadcast on RTÉ on 28 December 2014, providing an intimate portrait of Fields's family life, as well as spotlighting moments in his long career as a street photographer. A further book, Man on the bridge: more photos by Arthur Fields was published in 2017, when the archive had reached some 6,000 photographs.