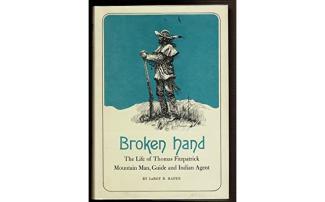 Cover from 1973 edition of 'Broken Hand' by LeRoy R. Hafen
Copyright
Fair use

Fitzpatrick, Thomas (‘Broken Hand’) (1799–1854), American frontier fur trapper, guide, and agent to the tribes of the central plains, was born in Co. Cavan, one of three sons and four daughters of Mary Fitzpatrick (née Kiernan) and her husband, whose forename is not known. A catholic, Thomas received the fundamentals of a sound education before emigrating to America by age seventeen. For some thirty years he played a prominent role in the exploration, exploitation, and conquest of the American west, a key participant in many of the historic events of the era. Joining the second fur-trading expedition of William Henry Ashley (1823), when passage up the Missouri river was rendered impossible after two armed clashes with Arikara people, Fitzpatrick was designated second-in-command under Jedediah Smith of a party of fifteen men dispatched by Ashley to blaze a direct overland route to the fur country of the central Rocky mountains. After wintering in the Wind river valley, the party crossed the continental divide at South Pass (March 1824), and descended into the rich beaver country of the Green river and its tributaries, thereby making the effective discovery of the passage that for the next half-century would be the major route through the Rockies to the Pacific ocean. After returning east with a large stock of pelts, Fitzpatrick guided Ashley with a horse train of supplies and trade goods on a winter journey over the new route, arriving at Green river in April 1825. After leading a small trapping band into the Uinta mountains, he reassembled with several other bands and the supply train (July 1825), the first of the sixteen famed annual rendezvous – raucous trade fairs at which trappers sold furs, purchased supplies, and revelled after months of wilderness solitude. Occurring in the heart of trapping country, these gatherings obviated the necessity of lengthy journeys to fixed riverine trading posts, thus constituting the defining innovation of the Rocky mountain trapping system.

For the next fifteen years Fitzpatrick led trapping bands, conducted supply caravans to rendezvous, and conveyed furs to river posts whence they were boated east to St Louis. Employed by Ashley's firm and its successor until 1830, he was senior partner in the Rocky Mountain Fur Company (1830–34), which contested a fierce trapping and trade war with the mighty American Fur Company of John Jacob Astor. While travelling alone ahead of the 1832 supply train, he endured a harrowing episode of flight and wilderness foraging under pursuit by Gros Ventre tribe– an experience that reputedly caused the premature greying of his hair – and subsequently led a body of trappers and Native American allies against a party of Gros Ventres in the battle of Pierre's Hole. After the dissolution of the Rocky Mountain company, he was partner in two subsequent firms, before selling out to the American Fur Company (1836), which thereafter employed him annually as a band leader. After suffering the mangling of his left hand by the bursting of his own rifle, probably during a skirmish with Blackfeet in January 1836, he was widely known among Native American tribes by the name Broken Hand. While conducting the 1836 supply caravan he was accompanied to the Green River rendezvous site by the Whitman–Spalding missionary party bound for Oregon, and notable for the first crossing of the continental divide by Euro-American women (the wives of the party's leaders).

With the fur trade in drastic decline owing to over-hunting and the change in fashion from beaver-skin to silk hats, Fitzpatrick, as a seasoned ‘mountain man’, served as guide to westward-bound settlers, exploration parties, and military expeditions. He guided the first two Pacific-bound emigrant wagon trains (1841 and 1842) along the old trappers’ route, now known as the Oregon trail, to Fort Hall on the Snake river; the 1841 train joined forces with the first catholic missionary party to cross the Rockies under the Belgian-born Jesuit priest Pierre-Jean De Smet, whom Fitzpatrick accompanied to the Flathead country of northern Idaho. He guided John C. Fremont's fourteen-month expedition of 1843–4 through the Oregon country and California, which achieved a daring winter crossing of the Sierra Nevada; functioning as expedition quartermaster, he frequently commanded the main section and baggage train when Fremont led smaller parties on exploring forays. As war with Mexico loomed after the USA's annexation of Texas, he guided two of the three western military reconnaissance missions of 1845: the Kearny expedition of five companies of dragoons across the central plains into the Rockies, and the Abert expedition through the internationally disputed territory of the Texas panhandle and western Oklahoma. When war was declared, he guided Kearny's army of the west, which invaded Mexican territory and occupied Santa Fe (August 1846).

Appointed 'Indian agent' for the region of the Upper Platte and Arkansas (1846–54), he was thus the first US agent to the tribes of the central plains: Cheyenne, Arapaho, and several bands of Lakota Sioux. He married (November 1849) Margaret Poisal, daughter of a French Canadian trapper and an Arapaho woman; they had one son and one daughter (the latter born posthumously). Near Fort Laramie in September 1851 Fitzpatrick convened the largest Native American council ever held in the west, attended by some 10,000 plains and mountain tribesmen, and successfully negotiated a treaty whereby tribal chiefs pledged peace among themselves and with Euro-Americans, and guaranteed safe passage of westward-bound emigrant traffic through defined tribal territories, in return for government annuities of $50,000 in goods. He subsequently was required to obtain ratifications from the signatory tribes of US senate amendments reducing the term of annuities from fifty years to fifteen. At Fort Atkinson in July 1853 he concluded a similar treaty with the Comanche, Kiowa, and plains Apache. Summoned to Washington to discuss the latter treaty, he fell ill with pneumonia and died 7 February 1854, and was buried in the congressional cemetery.

Of medium height, spare but muscular in frame, remarkably coolheaded and adaptable, Fitzpatrick is ranked alongside Kit Carson and James Bridger as the three greatest of the mountain men. While their equal in courage and woodcraft, and their superior in education, erudition, and versatility of accomplishment, he was their inferior in contemporary and retrospective fame, a consequence of the comparative dearth of contemporary publicity surrounding his exploits. A devotee of Jacksonian democracy and manifest destiny, while regarding Native Americans as cultural and personal inferiors, and advising stern retribution for acts of violence, he opposed policies of extirpation and territorial contraction as tantamount to extermination, and insisted on just and honest relations. He counselled the gradual ‘civilisation’ of the semi-nomadic hunting plains tribes by patient training in the arts of tillage and trade – describing the latter as the historic civiliser of humankind – but lacked easy optimism regarding such a policy's conclusion. Though he was remembered favourably by such leaders as Black Kettle of the Cheyenne and Little Raven of the Arapaho – who called him the ‘one fair agent’ his people ever had – their judgements were perhaps influenced by the depths of fraud and betrayal their tribes subsequently encountered.