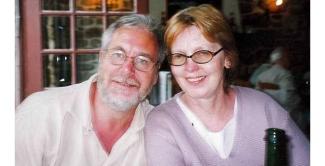 Fleming, Marie (1953–2013), campaigner for assisted suicide, was born Eileen Mary Brolly on 26 December 1953 in Lifford, Co. Donegal, the first of five children (two girls and three boys) to Annette (née Maxwell) and Daniel Brolly, a painter and decorator. In 1969, when she was fourteen, her mother left the family following an affair with married local businessman and Fianna Fáil senator, Paddy McGowan (d. 1999). 'It spelt the end of my childhood' Fleming wrote in her memoir – she had to leave school, having just completed her inter certificate, to care for her younger siblings.

When she was sixteen she became pregnant by her teenage boyfriend Johnny ('Jumbo') McNally and was sent to a mother and baby home in Belfast. She was pressured by her father and their local parish priest to give the child up for adoption, but the determined young woman was able to both get out of the home and to keep her baby daughter, Corrinna. The teenage parents married shortly after Corrinna's birth and moved into a council house in Strabane. The marriage lasted only a short time, and upon separating Fleming supported the family working as a supervisor in a clothing manufacturer. Shortly after her divorce in 1977 she met Alan Fleming, whom she would marry in 1981. They had a son named Simon. With Alan's encouragement she returned to education, attending a technical college in Strabane. The couple then moved to Derry, where she worked first on a scheme teaching industrial sewing to unemployed youths, then as an administrator at Magee College (University of Ulster) from 1983. She also commenced a part-time business degree.

In September 1987, Fleming started to feel unwell on a family holiday in Gran Canaria, experiencing disorientation, dizziness and intense light sensitivity. Upon her return to Northern Ireland she was diagnosed with suspected multiple sclerosis (MS). Her husband had just lost his job as a factory manager in Dungannon, but found new employment in Swansea, precipitating a move to Wales. In the UK Fleming had an MRI to confirm the diagnosis of MS. Determined to continue living her life to the full, Fleming got a job at the University of Wales, promoting the institution to businesses and overseas institutions and developing new funding streams. She also began a part-time MBA. Her MS symptoms stayed at bay initially, but she began to have attacks within three years of her diagnosis, which she masked as short-term illnesses to her colleagues and friends. She split with Alan Fleming in 1993 and the following year took a job at UCD, returning to Ireland with her then nine-year-old son and living in the family's former holiday cottage in Woodenbridge, Co. Wicklow. She hid her condition for as long as possible, giving up her full-time role at UCD and taking a job in Arklow lecturing in women's studies on a back-to-school programme for adults.

In 1995, she met Tom Curran, who would be her life partner, advocate and carer in the years ahead. Two years later in 1997, she experienced her worst attack from MS and was admitted to the neurology department at St Vincent's Hospital in Dublin. The attack left her with a slight limp in her left leg. Her subsequent attacks became more severe and debilitating, and she was finally forced to give up work. In 2003, Curran gave up his IT consultancy to become her full-time carer. By 2004 she was dependent on a wheelchair for mobility and was losing the feeling in her hands, she also suffered from constant pain.

Knowing that her health would only continue to decline, Fleming began to think about her death, which she anticipated would be 'prolonged, painful and undignified' (Fleming, 2014). She decided then that she wanted to be able to end her life at a time of her own choosing and began considering her options. She initially made a booking with the assisted suicide organisation Dignitas in Switzerland, but cancelled it realising that her family members may be prosecuted for helping her to travel there (suicide had been legal in Ireland since 1993 but assisted suicide and euthanasia were treated as either manslaughter or murder and punishable by up to fourteen years in prison). To ease her worst fears, Curran assured her that he would find a way to fulfil her wish to die at home peacefully and surrounded by her loved ones when the time came.

To protect Curran from potential prosecution, the couple decided to pursue a case in the high court. Their argument was that though Fleming could legally take her own life, she was physically unable to do so without assistance, and that refusing her this assistance was tantamount to discrimination against a disabled person and incompatible with the European Convention on Human Rights Act 2003. After a few years searching they found lawyers willing to take their case, as well as receiving support from the Irish Human Rights Commission and the International Committee for Human Rights.

The case, which lasted six days, commenced on 4 December 2012 and was heard by three judges at the high court. Fleming gave testimony on the first day but remained at home while the two sides argued the case in court. She attended again on 10 January 2013 for the judgement – a unanimous rejection of her bid to change the law and be allowed an assisted death. The judges found that her human rights were not compromised by the law, and though she was legally entitled to bring about her own death by refusing life-saving treatment, the intervention of another party remained a separate issue and would be treated as an illegal act. The president of the high court, Mr Justice Nicholas Kearns, remarked that dilution of the ban on assisted suicide would open a 'Pandora's box' and involved too high a risk of abuse. The case was then presented to a seven-judge panel at the supreme court in February 2013 who considered three submissions – one from Fleming's legal team, one by the Irish Human Rights Commission and one from the state. The supreme court ultimately upheld the high court ruling.

On Friday 3 May 2013, Curran appeared on The Late Late Show where he tearfully read out a short statement from Fleming to a silent and sympathetic audience. The broadcast achieved the second highest ratings in the show's history to that point, and newspapers gave Fleming's story significant coverage. Despite the media attention and opening of the public debate on the issues of assisted suicide and euthanasia, politicians avoided addressing them legislatively until independent TD John Halligan introduced a private members bill in 2015. However, this was not subsequently progressed.

Fleming's health began to decline further in 2013 and she became largely housebound. Her last major outing was to her son's wedding in the August. She died at home with Curran on 20 December 2013. Her funeral mass was at the anglican Church of the Holy Trinity in Castlemacadam, Co. Wicklow, and she was buried in the adjoining churchyard (Fleming had broken with the catholic church after her harsh treatment as a pregnant teenager but retained a strong faith throughout her life). Her memoir, An act of love: one woman's remarkable life story and her fight for the right to die with dignity, was released posthumously in February 2014.

After her death, Curran continued to campaign for legislation on assisted suicide and euthanasia through his role with the organisation Exit International and as co-founder of Right to Die Ireland. In 2016 he publicly acknowledged that he had in fact assisted Fleming to die in accordance with her wishes. In an interview with the Irish Examiner he stated of his admission: 'It had to come out, otherwise, to a certain extent, what Marie fought for is a waste' (7 June 2016).