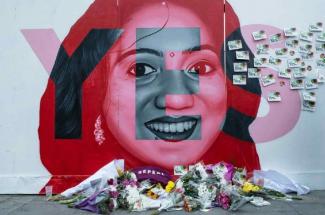 Halappanavar, Savita (1981–2012), catalyst for change in Irish abortion laws, was born Savita Andanappa Yalagi on 29 September 1981 in Bagalkot, Karnataka province, south-west India, the youngest of three children (two boys, one girl) of Andanappa Yalagi, an electrical engineer with the Karnataka Electricity Board, and his wife Akhmedevi. She was born into the Lingayat religion, an offshoot of Hinduism that rejects the caste system.

In 1990 the Yalagi family moved to Belgaum – then a city of some 500,000 people, 140km from Bagalkot – and built a house in the quiet neighbourhood of Sri Nagar. In Belgaum, Halappanavar attended Vanita Vidyalaya, a coeducational secondary school, where she excelled in science subjects. She then went to the Maratha Mandal Dental College in 2000, completing her studies at Institute of Dental Sciences at the Karnataka Lingayat Education (KLE) university. A lover of dance from childhood, she was involved in theatrical and literary societies at university. Upon graduating with a degree in dental science, she undertook an internship at a Belgaum dental practice, working there until 2007.

She met her future husband Praveen Halappanavar on a matrimonial website. Also from Karnataka, he was living in Ireland when they met, working as an engineer for Boston Scientific, a medical supplies company in Co. Galway. The two became close through regular video calls and married in Belgaum in April 2008. Halapannavar joined her new husband in Ireland three months later, and lived in Ballybrit, east of Galway city. The sociable Halappanavar settled well into her new life, took part in dance competitions and helped organise events with fellow Indian expatriates in Galway, quickly developing a new circle of friends.

To work as a dentist in Ireland, Halappanavar had to sit exams for the Irish Dental Council, which she passed in July 2012. That month she learned that she was pregnant. On 11 October 2012 she attended her first antenatal appointment at University Hospital Galway where an ultrasound scan indicated she was seventeen weeks pregnant. On the evening of 20 October, she was unable to sleep due to an escalation of the back pain she had been suffering for months, which was radiating into her pelvis. She attended hospital the following morning with her husband, was examined and sent home with pain medication. Not long after returning home however, she experienced further worrying symptoms and went back to the hospital where she was told she was miscarrying due to dilation of the cervix.

In the early hours of the morning of Monday 22 October, Halappanavar's water broke and she became extremely unwell – vomiting and experiencing what nurses noted as a spontaneous rupture of the membranes. Later that morning she was prescribed an antibiotic as a preventative measure against possible infection but did not receive her first dose until later that evening. She was also sent for an abdominal ultrasound to confirm the presence of a foetal heartbeat, after which she and her husband asked about a termination of the pregnancy. By Praveen's account they were told by the consultant that she would speak to another colleague about what was the best course, but heard nothing further.

The next day, Halapannavar again asked about termination or expediting delivery of the foetus and her consultant, Dr Katherine Astbury, later stated at the inquest 'I recall informing Ms Halappanavar that the legal position in Ireland did not permit me to terminate the pregnancy at that time' (Holland, 18). Although an elevated temperature and pulse rate was recorded by nurses, Halapannavar was not examined by a doctor for some thirty-six hours, by which time she had been showing signs of sepsis. When she was eventually examined, blood tests were taken but not marked urgent and a lactate sample, which would help indicate sepsis, was misdirected and later discarded. Halapannavar was then administered with intravenous paracetamol, an antibiotic and fluid therapy and given an electrocardiogram test to examine her heart rate which was dangerously elevated.

A further twenty-four hours passed before her blood test results were available, showing a dangerously low white cell count and indicating sepsis. Her consultant did not review the results for a further three hours by which time Halapannavar's blood pressure was falling while her pulse remained elevated, and she was experiencing chest pain and difficulty breathing. Her consultant and another consultant obstetrician agreed on delivering regardless of the continuing foetal heartbeat as Halapannavar's life was clearly at risk. Subsequent pre-surgery scans for a foetal heartbeat found that the foetus had died. She was taken into theatre where she spontaneously delivered a female foetus, who she and Praveen named Prasa. Halapannavar was then transferred to the high dependency unit where her health continued to deteriorate. Further interventions were unable to save her life and Savita Halappanavar died aged thirty-one from a septic miscarriage at 1.09am on Sunday 28 October 2012.

After a post-mortem, which confirmed death from septicaemia and E. coli ESBL, Halapannavar's remains were released. On 1 November Praveen took them to Belgaum for a private funeral held on 3 November with just family and close friends. She was buried, in accordance with Lingayat traditions, in Kalmath graveyard in the Sadashiv Nagar district of Belgaum.

While Praveen was still in India, his friends in Ireland sought legal advice. Finding they had to wait until an inquest was ordered, which could take months or even years to be completed, they contacted the Galway Pro-Choice campaign. With their support, journalist Kitty Holland of the Irish Times was approached to help bring the story of Halappanavar’s death to light. On 14 November 2012 Halappanavar’s image appeared on the frontpage of the Irish Times alongside the headline ‘Woman “denied a termination” dies in hospital’. All major Irish news outlets covered the story, as did international outlets including the BBC, CNN, Al Jazeera and Sky News. Within a day it became the most-viewed news story in the history of the IrishTimes.com website. Praveen spoke to RTÉ’s News at One from India that afternoon. In the evening a spontaneous candlelit vigil took place outside Leinster House and was widely reported on news channels. A national protest rally, the 'March for Savita', took place in the city three days later, attended by an estimated 10–12,000 people. Other gatherings were held in towns and cities around the country as well as internationally.

Praveen called for a sworn, independent public inquiry, rather than a Health Service Executive (HSE) inquiry, arguing that a self-investigation would by its nature be biased. In response to his concerns the HSE asked the independent Health Information and Quality Authority (HIQA) to carry out its own separate inquiry into Savita Halapannavar's care. Praveen declined to participate in either inquiry. The coroner’s inquest, which would seek to determine the circumstances leading to the death without holding any specific medical practitioners responsible, commenced provisionally in January and concluded in April 2013 under Galway coroner Dr Ciaran McLoughlin. The formal inquest sessions in April consisted of seven days of evidence heard across two weeks with over thirty witnesses – the longest inquest in the history of the state to that date.

The eleven-person jury of the coroner’s inquest into Halapannavar’s death reached a unanimous verdict of death by 'medical misadventure' on 19 April 2013. During the inquest expert witness Dr Peter Boylan, former master of the National Maternity Hospital, stated that 'The real problem was the inability to terminate the pregnancy prior to Ms Halappanavar developing a real and substantial risk of death. By that time it was, effectively, too late to save her life' (Holland, 212). In a statement to the media after the inquest, Tony Canavan, chief operating officer of the Galway Roscommon Hospital Group acknowledged that there were lapses in the standard of care given to Savita Halapannavar.

On 13 June 2013 the HSE published an anonymised report, which warned that more women could die in Irish hospitals unless legal clarity was provided to doctors on terminating a pregnancy. Professor Sabaratnam Arulkumaran, chair of the investigation, described the care Halapannavar had received as 'substandard' (Holland, 240) and stated that had she been in his care in the UK she would have been offered a termination on the day of her admission. The report concluded that Halapannavar was fighting an infection on the morning she arrived in the hospital and that the infection was the cause of the miscarriage not foetal abnormality, and that this should have been recognised by the hospital staff when examining her. The report also found that the failure to monitor her condition adequately, particularly as termination was not considered an option, was a primary cause of her death.

The HIQA report was not published until October 2013. It found lapses in the care of Savita Halapannavar and highlighted issues around clinical governance at University Hospital Galway. As neither the inquest nor the two inquiries had any direct consequences for any of the medical practitioners involved, Praveen Halapannavar decided to take legal proceedings against University Hospital Galway, and separately against Dr Katherine Astbury, for medical negligence (September 2013).

Although abortion was already illegal in Ireland, in 1983 a constitutional referendum was held on recognising the equal right to life of the pregnant woman and the unborn baby. It passed resoundingly with sixty-seven per cent of the vote. The result was the insertion into the Irish constitution of Article 40.3.3, known as the eighth amendment, which read: 'The State acknowledges the right to life of the unborn and, with due regard to the equal right to life of the mother, guarantees in its laws to respect, and, as far as practicable, by its laws to defend and vindicate that right.' In 1992 the so-called X case in the supreme court affirmed the right of women to have an abortion should their life be threatened (in that instance by suicide). Neither the constitutional amendment nor the X case were backed up by legislation which clarified the circumstances under which termination was permissible. That and the continued threat of up to fourteen years imprisonment for the provision of termination led to the Irish medical profession being extremely cautious in such cases.

It was not until a 2010 ruling against the Irish state by the European Court of Human Rights (ECHR) on the lack of legislative clarity, that the government was forced to take decisive legislative action, albeit slowly. In this environment reports in November 2012 of Halapannavar’s death sent shock waves through the Irish public and gave a boost to campaigns demanding not just legislative clarity, but a full repeal of the eighth amendment and provision of abortion services in the Republic. This prompted the government to pass the Protection of Life During Pregnancy Act, 2013, on 12 July, but many believed that its narrow provisions would not have saved Halappanavar’s life. Pressure to ‘repeal the eighth’ amendment continued and culminated in a successful constitutional referendum on 25 May 2018 which replaced Article 40.3.3 with the clause: ‘Provision may be made by law for the regulation of termination of pregnancy.’ Thirty-nine of Ireland’s forty constituencies voted in favour of repeal of the eighth amendment. The government subsequently introduced the Health (Regulation of Termination of Pregnancy) Act, 2018, which allowed for termination up to twelve weeks gestation, and thereafter where there is a serious threat to the health or life of a pregnant woman, or when there is a condition affecting the foetus that is likely to lead to its death.

Throughout the campaign the image of Savita Halappanavar had been widely displayed by those seeking repeal. On the eve of the referendum, street artist ‘Aches’ painted a mural of Savita Halappanavar featuring the word ‘yes’ on South Richmond Street, Dublin. It became a rallying point for supporters of repeal who visited the site in large numbers, leaving flowers, candles and notes of remembrance. Praveen Halapannavar’s legal cases against University Hospital Galway and consultant Dr Katherine Astbury were settled in March 2016 for an undisclosed figure.