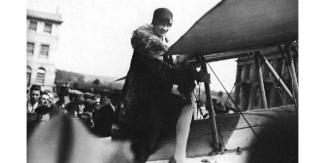 Sophie was reared by her grandfather, Dr George Peirce-Evans, and by her aunts in Newcastle West, Co. Limerick, and educated in St Margaret’s Hall School, Dublin. Enrolling as an associate student in the Royal College of Science (RCS) on Merrion Street in 1914, she was an excellent and popular student. In November 1916 she married William Eliott-Lynn, a forty-one-year-old army officer. Soon, she abandoned her studies to volunteer in England for the Women’s Auxiliary Army Corps as a motorcyclist dispatch rider. In 1917 she went to France, operating close to the front. She was the subject of a portrait, in uniform, by the official war artist Sir John Lavery (qv) in 1918. Demobilised in July 1919, she resumed her studies in the RCS, graduating first in her class in July 1921 with an associateship in agriculture. She based herself in London while her husband farmed at Pangani in east Africa’s Tanganyika territory. Although she visited him in 1922, and again in 1923, the Eliott-Lynns, who had never spent much time together, then drifted towards divorce.

Having become obsessed with athletics during 1921, she competed in athletics meets held in and around London and further afield in the early to mid-1920s. Of Amazonian proportions, she stood 6ft (1.83m) tall, weighed 11st (70kg) and excelled in several events, notably the high jump and the Greek two-handed javelin throw (which involved adding together throws out of each hand). Soon after representing Britain in the shot at the first Women’s Modern Olympic Games held in Paris (August 1922), she helped set up the Women’s Amateur Athletic Association (WAAA), becoming its secretary and treasurer. At the inaugural English Women’s Athletics Championships, held in August 1923 at the Oxo Sports Ground, Bromley, she became England’s two-handed javelin champion. She claimed to have jumped 4ft 10in (1.47m) in the high jump at Brentwood that October and this was listed, probably incorrectly, as a world record. Her finest hour came at the 1924 English Women’s Championships, held in the Woolwich Stadium, London, where she won the high jump and javelin, smashing the two-handed javelin world record by throwing an aggregate of 173ft 2in (52.78m). This achievement, however, was not officially recognised due to a slight breeze.

She became vice-president of the WAAA in autumn 1923, which boasted 25,000 members in 500 clubs by 1925, and was active in the National Playing Fields Association, which sought better sports facilities for deprived children in urban areas. Cultivating a high profile, she spoke at sports and health conferences, and published a coaching manual, Athletics for women and girls (1925); she read out the book’s preface on BBC Radio. She spoke in favour of women’s participation in sport as a member of the Fédération Sportive Féminine Internationale (FSFI) delegation at the International Olympic Congress held in Prague (29 May–4 June 1925). Immediately after coming fourth in the two-handed javelin in the 1926 Women’s World Games at Gothenburg 1926, she participated in the ensuing FSFI conference held there and argued against women joining the Olympic movement, probably because she preferred for the WAAA to remain independent.

From 1925 aviation replaced athletics as her main interest. She was the first woman member of the London Light Aeroplane Club when it opened in August 1925 before qualifying that November for her private (‘A’) licence. Incensed by the International Commission for Air Navigation’s ban on commercial licences for women, she bombarded the commission with statistics on women’s fitness and offered herself for medical tests. The commission took up her offer but obliged her to undergo the required fitness tests while she was menstruating. She began studying for her commercial (‘B’) licence in January 1926 and went on to become Britain’s first officially recognised woman commercial pilot on 26 June. Her success obliged the authorities in Britain and in several other countries to rescind their ban on women commercial pilots.

Flying successively in a De Havilland Moth, a SE.5a Viper (from July 1926) and an Avro Avian MK II (from July 1927), she earned a living giving joyrides and flying lessons, and by performing stunts and participating in races in air shows in Britain and on the continent. In numerous air races she showed herself to be the best woman pilot in the country and well capable of beating most men also, mainly through her skill at cornering. Under a blaze of publicity, she became the first woman pilot to make a parachute jump in public in April 1926, set altitude records of 15,748ft (4,800m) in May 1927 and of 19,200ft (5,852m) in October 1927, and defeated her fellow Irishwomen and main rivals, Sicely O’Brien and Lady Bailey, in a ladies’ race at Bournemouth in June 1927. On a one-day publicity tour of British aerodromes in July 1927 she covered 1,250 miles (2,011km) and touched down seventy-nine times in eighteen hours. Later that month she made a triumphal visit to Ireland as an honoured guest of the Irish Air Corps, before re-crossing the Irish Sea to claim the Grosvenor Cup, the main short race at the Nottingham aviation meeting. Her Grosvenor Cup victory in a field of fourteen with only one other woman was publicised as the first by a woman pilot over men. To pay for her expensive recreation, she married a seventy-five-year-old industrialist Sir James Heath in October 1927, but only after delaying the wedding until he agreed to settle her with an income of £925 a year. Thereafter, she styled herself Lady Mary Heath, Mary being one of her middle names.

In February 1928 came the escapade that made her world-famous: the first solo flight by a woman from South Africa to England. Setting off from Pretoria on 17 February in her new Avro Avian Mk III, she suffered sunstroke near Bulawayo, Southern Rhodesia (Zimbabwe), and made an emergency landing but recovered to arrive in Khartoum on 1 April. This made her the first woman to fly across the equator. She attributed her safe progress to her assiduousness in maintaining her aircraft. On reaching Cairo she headed west along the north African coast because she disliked crossing long stretches of water. The locals liked to shoot at airplanes passing overhead, and she later found a bullet hole in one of her wings. Making the short hop to Europe from Tunis, she landed in Croydon, London, on 17 May and stepped out of the aircraft wearing a silk dress, fur coat and black straw hat, proclaiming that ‘it is so safe that a woman can fly across Africa wearing a Parisian frock and keeping her nose powdered all the way’ (Daily Express, 17 May 1928). She had covered about 10,000 miles (16,093km) in flying from Pretoria to London. Honoured with a dinner from the African Society and lunch from the Overseas League, she made clear her imperialist leanings, expressing the hope that her flight would strengthen the ties between the dominions and Britain.

In summer 1928 she was second pilot on the large Fokker planes operated by KLM, the Dutch airline, accumulating thirty hours experience carrying passengers on the London–Amsterdam route; on some of these flights the first pilot hardly touched the controls. She was thus the first woman to fly a commercial aircraft, but to her disappointment KLM did not hire her, fearing that having a woman pilot would deter passengers. On 4 October 1928 she claimed to have set a new altitude record of 23,000ft (7,010m) for a light aircraft, but the barographs on her plane conflicted, with the other reading 19,000ft (5,791m). Her claim was discredited, and she was criticised for engaging in another of her publicity stunts. The British press had always disliked her forceful personality and self-promotion, dubbing her ‘Lady Hell-of-a-din’ – this was a play on Eliott-Lynn, the surname by which she first became famous, though she has gone down in history as Lady Heath.

In November 1928 she escaped the jealousy towards her in Britain by moving to America, where she was received rapturously and toured the country, flying in air shows and races. Her title and accent led Americans to treat her as an aristocrat of long pedigree, and she thrived off lecturing and by acting as sales agent and test pilot for the Cirrus company, which made aviation engines. As well as writing regularly for US journals and newspapers, she published another book, co-written with Stella Wolfe Murray, Women and flying (1929), in which she encouraged more women to become aviators. On 29 August 1929, however, she crashed into a factory beside Cleveland Airport while practicing a dead stick landing. She was not expected to survive, suffering two factures of the skull and a fractured jaw amongst other injuries: steel plates were inserted in her skull. Though she recovered and flew again, it was never to the same standard. She became far more eccentric and drank heavily. Her second marriage ended in divorce in 1930: it had been in difficulties even before the accident due to her financial profligacy, an issue which had also undermined her first marriage. In November 1931 she married a black aviator, Reggie Williams, yet another man of means, originally from Trinidad.

Unable to earn a living in America, she returned to Ireland in 1932, settling in Dublin to work as a pilot and flight instructor for Iona National Airways, based in Kildonan, Co. Dublin. She helped set up flying clubs, most significantly the National Irish Junior Aviation Club, inaugurated in May 1933. After Iona closed in 1933, she and her husband bought out its successor company at Kildonan, Dublin Air Ferries, in 1935. The venture went bankrupt in 1936, whereupon she separated from her husband and moved to London. Her last years were scarred by instability, poverty and alcoholism; she was prosecuted several times for drunkenness and placed on probation. She died in St Leonard’s hospital in Shoreditch, London, on 7 May 1939 after falling from the top floor of a bus. There was no alcohol in her system, and the accident probably arose from a blood clot in her brain. Her third husband scattered her ashes over Surrey. None of her marriages produced any children.

Although she was forgotten for a time, her achievements in women’s athletics and aviation, and her role in their promotion, stimulated renewed interest in her from the late twentieth century. She was commemorated on an Irish postage stamp in 1998.