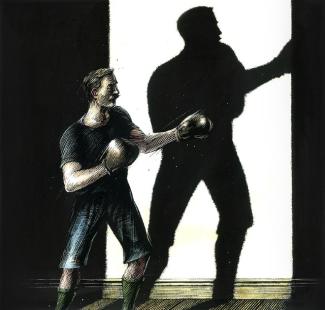 Johnstone, Walter Edgeworth- (1863–1937), soldier, DMP commissioner, and sportsman, was born at Kingstown, Co. Dublin, the eldest son of Robert Johnstone (1806–85), QC and county court judge, of Laputa, Co. Donegal, and his wife Doris Tivy. In 1838 a member of the Johnstone family had married into the Edgeworth family of Kilshrewley, Co. Longford (not the Edgeworths of Edgeworthstown) and subsequently some family members had taken the name Edgeworth-Johnstone. Educated at St Columba's College, Walter entered TCD in 1880, graduating BA in 1884. He played rugby and cricket for TCD, and played once for Ireland at rugby in 1884. After attending the Royal Military College at Sandhurst (1884–6), he was commissioned into the 1st West India Regiment in 1886. He served in the expedition against the Yonnie tribe in Nigeria, West Africa, in 1887 and was mentioned in dispatches. He also took part in the West African expeditions to the Tambaku country and Gambia, and was present at the captures of Tambi and Toniataba, again being mentioned in dispatches. In 1893 he was promoted to captain and transferred to the Royal Irish Regiment.

On his return to England his prowess as a sportsman secured him appointment as superintendent of gymnasia, southern district, in 1894; he later served as assistant-inspector of gymnasia (1895–8) and superintendent of gymnasia at the Curragh, Co. Kildare (1898–1902). He excelled at fencing and boxing as well as rugby and cricket and during his army career won numerous awards, including the army heavyweight boxing championship (1894), the amateur heavyweight championship of England (1895 and 1896), the Irish heavyweight championship (1895), the sabre challenge cup, royal military tournament (1896), and the amateur sabre championship (1898 and 1900). In 1888 he played for the Gentlemen of Ireland cricket team. He also published Boxing. The modern system of glove-fighting (1901). He belonged to several clubs, including the National Sporting, Kildare Street, Royal Irish Automobile, and the United Services clubs.

In January 1904 he was appointed RM for Dunfanaghy, Co. Donegal. Promoted lieutenant-colonel in 1906, he took command of the 4th (militia) battalion of the Royal Irish Regiment. Appointed chief commissioner of the DMP in January 1915, he was concerned by Dublin's traffic problems and initiated the stationing of constables on point duty at major intersections; he also introduced the wearing of white gloves by traffic policemen. More seriously, he looked upon the activities of the Irish Volunteers in the capital with great concern: on 7 April 1916 he reported to the under-secretary that ‘The Sinn Fein party is gaining in numbers, in equipment, in discipline, and in confidence, and I think drastic action should be taken to limit their activities. The longer this is postponed the more difficult it will be to be carried out’ (Herlihy, 173). At a meeting at the viceregal lodge on 23 April 1916 (the day before the outbreak of the Easter rising) he suggested that twenty to thirty Volunteer and Citizen Army leaders should be arrested simultaneously and interned in England, the rank and file disarmed, and all drilling and marching prohibited. During the rising he withdrew his men from the streets after three were shot dead. In May 1916 he gave evidence to the royal commission of inquiry into the causes of the rebellion. The commission praised the conduct of the unarmed DMP and noted that Edgeworth-Johnstone had given the government several warnings on which they could have acted before the rising.

Over the next few years Edgeworth-Johnstone faced the difficult task of commanding a civil police force in an increasingly militarised society. The DMP was armed briefly after 1916, but this decision was soon reversed despite protests from its members. During the war of independence (1919–21), shootings of uniformed DMP constables were few (although the detective ‘G’ division was specifically targeted by the IRA and suffered several fatalities) and the force had some success in maintaining public confidence in very difficult circumstances. One of the terms of the truce of July 1921 was that the DMP alone was to police Dublin. After the establishment of the Irish Free State the DMP was renamed Poilíní Átha Cliath and Edgeworth-Johnstone retired 30 April 1923. Most observers admitted that he had performed well in a difficult job: he was created CB (1918) and KBE (1924). He died 4 January 1936 at his London home, 1 Regent's Park Terrace, and was cremated at Golders Green cemetery.

In 1897 he married Helen Gunning Walker Walters; they had two sons and two daughters. His younger brother, Robert Johnstone (1872–1950), played rugby for Ireland (two caps in 1893) and in three test matches for Great Britain in their tour of South Africa in 1896. He joined the British army and was awarded the VC during the Boer war after he had suffered a serious wound and shown great courage at Elandslaagte on 21 October 1899. Another brother, Ralph Johnstone (d. 1915), was a medical inspector with the Local Government Board and played cricket and rugby (three caps in 1890) for Ireland.