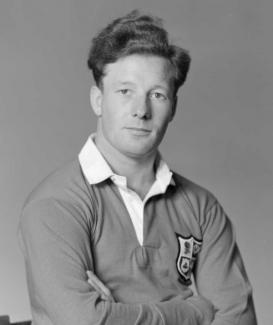 Kyle, Jack (John Wilson) (1926–2014), international rugby player and surgeon, was born on 10 February 1926 on Kinnaird Street on the Antrim Road in Belfast, the second of five children of John Wilson Kyle and Elizabeth (née Warren). When Jack was aged seven the family moved to more spacious surroundings at Glenburn Park off Old Westland Road. His father, originally from Co. Derry, was the Belfast manager of the North British Rubber Company. The family, though not excessively religious, attended Fort William Presbyterian Church. Jack attended Belfast Royal Academy (BRA) for both preparatory and secondary education from 1930 to 1944. He never missed a day of school and was appointed head boy in his final year. His all-round sporting talent stood out: apart from rugby, he played cricket at schools interprovincial level and also excelled at athletics. All of his siblings, apart from his youngest sister Beatrice, were talented sportspeople. His sister Betty (b. 1928) captained the Ireland women’s hockey team to Triple Crown success in 1950, his sister Brenda (b. 1934) played hockey to provincial level and his brother Eric (1924–90) played rugby for Ulster and was an Ireland triallist.

Though the senior rugby team at BRA was unsuccessful while Kyle was a pupil there, he was selected for the Ulster Schools team in 1943 and 1944. In 1944 he also captained the Ulster Schools cricket XI. His senior club career started at QUB, where he enrolled as a medical student in October 1944. Initially he was understudy out-half to another future Ireland international, Derek Monteith. An injury to Monteith saw Kyle called up to the QUB first team and his career took off rapidly. A running out-half, Kyle was noted for his speed off the mark and ability to spot a gap. His devastating pace over twenty yards and side-stepping ability left defences flat-footed and scrambling. He was also an adept left-footed tactical kicker from the hand but tended not to take placed kicks at goal. An instinctive player, he seldom planned what he would do and played the field in front of him as he saw it. Kyle was also a skilled defender, noted for his ability to make last ditch tackles.

In late 1944, within months of leaving school and still only eighteen, Kyle was selected for the Ulster senior XV. Against the Combined Services, he scored a trademark try after a weaving run. Selected again to play for Ulster in a victory over a New Zealand army XV in November 1945, he made his first appearance for an Ireland XV the following month alongside his future Ireland and British Lions teammate, and fellow teenager, Karl Mullen (qv). Ireland comfortably beat the British Army XV, though no caps were awarded as it was an unofficial international fixture.

Kyle’s performances in 1946, particularly with Ulster, made him a certainty for selection when international rugby officially resumed in 1947 after its wartime hiatus. He earned his first cap against France in January 1947. Although the Irish team lost, new caps were awarded to era-defining players such as Kyle, Mullen and flanker Billy McKay (1921–97). All three starred in Kyle’s second cap for Ireland two weeks later, a record 22–0 victory over England at Lansdowne Road. Though Kyle did not score, he tormented the English defence with penetrating runs, and was acclaimed as not just ‘the best out-half in Ireland but better than any in England, Wales, Scotland or France’ (Ir. Press, 10 Feb. 1947).

This was the prelude to a glorious era for Irish rugby. In 1948 Ireland won the Triple Crown for the first time in the twentieth century, finishing the campaign with a nail-biting victory over Wales at Ravenhill in Belfast. Kyle was the team’s outstanding player, scoring two tries in the campaign, including a crucial score at Twickenham, and providing faultless tactical judgment throughout the championship. By beating France, the team secured what later generations would call the Grand Slam. Hindsight accorded added prestige to the team of 1948 for the latter reason alone, even though until at least the 1960s the Triple Crown and the Grand Slam were honours held in roughly equal esteem. The focus of popular memory on 1948, therefore, has done disservice to how dominant the team was in these years.

When Ireland retained the Triple Crown in 1949 with a rare victory on Welsh soil, they had won ‘the most coveted honour of the rugby season’ (Ir. Times, 10 Mar. 1949). After a disappointing campaign in 1950, Ireland again won the championship in 1951. The team’s success was built on a strong, tenacious forward pack featuring a dynamic backrow of Billy McKay, Jim McCarthy (1924–2015) and Des O’Brien (qv). Kyle was the creative force in what contemporaries viewed as an otherwise workmanlike backline. During these years Ireland jostled for supremacy with a great Wales team: when Ireland took championship honours in 1951, Wales denied them a third Triple Crown in four years with a 3–3 draw in Cardiff. An injury to full-back George Norton (1920–99) meant that Ireland took to the field in that match without a regular goal-kicker. Since penalty goals and unconverted tries both carried a value of three points in 1951, the role of the goal-kicker was crucial. Three different players were given the role during the game; however, it was luckless winger Harry Millar’s failure to convert either Kyle’s try or a last-minute penalty that proved decisive.

By then, Kyle was at his peak and was rated internationally as one of the greatest ever to play the game, having burnished his reputation with superb performances on the British Lions tour to New Zealand and Australia in 1950. The team, captained by Mullen, were on tour for nearly six months and played thirty matches. They drew one and narrowly lost three tests against the All Blacks and comfortably defeated Australia in two further tests. New Zealand crowds and commentators, knowledgeable and difficult to impress, were enthralled by Kyle’s performances. The Lions played a running style of rugby that not only suited Kyle but also endeared the tourists to the home crowds. The highlight of Kyle’s tour was the drawn first test in Dunedin. He scored a characteristic try early in the second half, sprinting through a gap to score. While the Lions lost their remaining three tests in New Zealand, coming off a poor second best in the forward exchanges, they produced some dazzling back play, often orchestrated by Kyle. According to one local newspaper, ‘Kyle with much less of the ball than his opposites, has shown in two tests the contribution a player with genius can make’ (Bay of Plenty Beacon, 26 June 1950).

After the championship win of 1951, Ireland’s fortunes waned. In 1953 Kyle was appointed captain of Ireland and remained in the role for six tests. His run of thirty-two consecutive tests for Ireland was interrupted by injury in 1954 and he was dropped for the Championship fixture against Scotland in 1955. His omission, albeit for just one test, has nonplussed commentators then and since. He remained capable, nevertheless, of producing the magic of his earlier career. In 1956 Ireland earned a shock 11–3 win in Dublin over Wales that included a 40-yard drop goal by the outstanding Kyle, denying Wales the Triple Crown and Grand Slam.

However, the general trajectory, both for Ireland and Kyle, was decline. Ireland took the ‘wooden spoon’ in 1955 and again in 1958. During the latter campaign, it was clear to commentators that Kyle had lost the step of pace so essential to his style of play. After a victory over Scotland (1 March 1958), he lost his place on the team. The press correctly assumed that he would never regain it and paid him generous tributes, one paper recalling ‘The superb technique of the Belfast boy’s play, the quickness of his reactions, his hawk eye for openings, speedy thrusts, precision kicking … were a joy to watch’ (Ir. Press, 5 Mar. 1958). Kyle finished his career with forty-six caps for Ireland, an immense number by the standards of the time. With the addition of his six test appearances for the Lions, Kyle earned fifty-two international rugby caps in all, setting a world record that was only broken by the Irish full-back Tom Kiernan in 1971. Kyle scored seven international tries, the last against France in 1957. He also appeared eight times for the Barbarians (1948–54), his off-the-cuff attacking instincts providing a perfect match with the club’s ethos.

At club level he won two Ulster Senior Cup titles: one with Queen’s in 1951 and another with North of Ireland Football Club in 1955. He was also a member of an Ulster team that dominated the interprovincial series in the early 1950s, taking titles in 1950/51, 1951/2, 1953/4 and 1955/6. After his international retirement he continued to play club rugby for North of Ireland and, as late as 1960, was the captain of the third XV.

By then Kyle was eager to get his medical career off the ground. He had graduated MB, B.Ch., and BAO in 1951 and, intent on pursuing surgery, took positions at the Royal Victoria Hospital and Belfast City Hospital. In 1962 he became a fellow of the RCSI. Keen to travel and intent on forging a career somewhere he was less known, Kyle took a post in Indonesia for two years. Shortly after returning to Belfast in 1964, he decided to emigrate again, this time to Zambia, where he worked as a consultant surgeon and stayed for nearly thirty-five years. Pursuing his medical career in a remote location brought a pleasing anonymity with it: ‘I wanted to be seen as a surgeon first and foremost … it was very important to me that life was not defined by my rugby career’ (Conversations, 148). In the mining town of Chingola, where the Kyle family settled in 1966, surgeons were few, expertise narrow and diagnostic equipment scarce. Kyle, of necessity, carried out operations across a wide range of surgical specialisms. He enjoyed the rhythm of life in Zambia where his family lived comfortably and were part of a vibrant expatriate community. After his retirement, Kyle returned to Northern Ireland permanently in 2000 and was a regular attendee at international rugby matches in Dublin, where he was always greeted with particular affection; he took immense pleasure at being present at the Millennium Stadium in Cardiff in 2009 when Ireland won the Grand Slam for the first time since 1948.

Though little is known about Kyle’s political opinions, he publicly stated his abhorrence at what he viewed as Ian Paisley’s (qv) melding of unionism with religious bigotry in a letter to the Irish Times in July 1966. He also took genuine, unaffected pride in the all-island composition of the Ireland rugby team. Kyle was much decorated and honoured. Awarded an OBE in 1959 for services to rugby, he was named as the ‘Greatest ever Irish rugby player’ by the IRFU in 2002 and was an inductee to the International Rugby Board’s Hall of Fame (2008). He received honorary degrees from QUB (1991) and UCD (2009). Among his medical honours was a silver medal from the RCSI, and in 2007 he was awarded a Lifetime Achievement Award by the Irish Journal of Medical Science and the Royal Academy of Medicine in Ireland.

In May 1957 Kyle married Shirley Anderson at Lambeg Parish Church in Lisburn. The couple, who later divorced, had two children, Caleb and Justine. His brother-in-law and close friend was his QUB, Ulster and Ireland team mate Noel Henderson (1928–97), who was married to Betty Kyle. After a period of ill health, Jack Kyle died on 28 November 2014 at Bryansford, Co. Down. He was widely mourned, not just for his sublime rugby skills, but for his humanity, generosity and modesty.