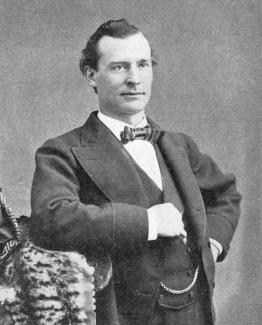 McCullough, John Edward (1832–1885), actor, was born on 14 November 1832 in the family home in the townland of Blakes in Dunboe, Coleraine, Co. Londonderry, the second of four children (one boy, three girls) to James McCullough, a presbyterian small farmer, and his wife Mary. Mary died in 1844 just prior to the 1845–49 famine which plunged the family into serious difficulty. In 1847 John and his sister Jane were sent to America, landing in New York then travelling to Philadelphia, Pennsylvania, where they had some relations. Their father and sisters followed later, and James McCullough earned a humble living farming in Philadelphia. John McCullough initially worked as a 'barrow man' at a gasworks before being apprenticed at his cousin's chair-making business.

Little is known about his early schooling but it appears to have been minimal. McCullough apparently acquired a basic reading ability in childhood and taught himself to write as an adult. He was often credited with having an excellent memory. He married Letitia McClean (or McClain), his landlord's daughter, on 8 April 1850 at the First Presbyterian Church in Kensington, Pennsylvania. They were both seventeen and their first son, James, was born in July 1850. Ten years later they had a second son, William Johnson, who they named after a friend who supported McCullough in his early years in America.

There are various stories about the origin of his interest in theatre, including that a fellow Irish workman used to recite extended passages of Shakespeare in his hearing; another that upon learning that a popular actor had once been a humble carpenter like himself, he decided that he too could achieve stage success. However his interest developed, McCullough joined a local dramatic society, took elocution lessons and reportedly applied his mind to memorising the Chamber's encyclopaedia of English literature, soon having all the information therein at his fingertips.

He made his stage debut at the Arch Street Theater in Philadelphia in August 1857, with a minor role in 'The belle's stratagem' by Hannah Cowley (1743–1809). John Wilkes Booth (1838–1865, assassin of Abraham Lincoln) also joined the theatre company that year, and the two became friends. McCullough continued his apprenticeship at the Arch Street Theater until the summer of 1860, then moved to the Howard Athenaeum in Boston for the 1860–61 season before returning to Philadelphia for a turn at the Walnut Street Theater where he came to the attention of the renowned Shakespearian actor Edwin Forrest (1806–1872). Forrest became his mentor, and the two toured and worked together for five years (1861–66), with McCullough usually playing Forrest's right-hand man: Laertes to his Hamlet, Iago to his Othello, Macduff to his Macbeth. With Forrest's approval McCullough struck out on his own, moving to San Francisco in 1866 where he managed the California Theater for ten years, initially in partnership with Lawrence Barrett. He took the lead in the majority of the theatre's productions and toured extensively with his company, building a national reputation.

The nineteenth-century equivalent of a matinee idol, McCullough was tall and classically handsome with a powerful voice. Described by contemporary theatre critic Stephen Fiske as 'a robust actor, who depended for his effects upon his physique' (Art Amateur, November 1884), he excelled in playing heroic characters in tragedies and melodramas, and had a repertoire of perhaps thirty such roles. He was best known for his Virginius (the eponymous hero of Sheridan Knowle's play) and his Othello. McCullough's career peaked at a time of immense change in theatre internationally, as storylines and acting styles shifted from classicism to naturalism to realism. As a consequence he stopped imitating Forrest's classical style and studied the 'Delsarte method' of acting to try to introduce a little more nuance into his performances. He managed to create his own hybrid style between classicism and naturalism (if still more reliant on the former) but his performances were often compared unfavourably to those of his contemporary Edwin Booth (1833–1893), elder brother of John Wilkes Booth, whose ground-breaking naturalistic embodiment of Hamlet inspired a new generation of actors.

Upon leaving the California Theater in 1874 he returned to the east to give star turns in New York's premiere theatres as Spartacus in 'The gladiator' (it was said nobody looked as good in a toga as John McCullough), Hamlet and Colonel Bligh in Dion Boucicault's (qv) 'Belle Lamar', before hitting the road again to perform in New Orleans, San Francisco, Chicago and Boston. In December 1875 he performed 'Virginius' at the National Theater in Washington in front of President Ulysses S. Grant and his cabinet. McCullough continued to tour for the rest of his career, remaining largely independent of the theatre company system as his fame grew and theatres across the country vied for his talents, willing to pay him a large profit share for his performances. At the height of his career he was earning an estimated $50,000 per year.

McCullough visited his birthplace in Ireland in 1880 and again in 1881 following his six-week appearance at Drury Lane Theatre, London, with turns as Virginius and Othello. In London, he played to full houses but his performances received mixed reviews and were considered by some to be old fashioned. While there a grand reception was given in his honour by the Duke of Manchester and attended by Queen Victoria, and the Prince and Princess of Wales. In Ireland, he was warmly received by family friends, relations and well-wishers. A relative Joseph Cochrane held a reception for him and he was a guest at Downhill Castle, the seat of his family's former landlords, who reportedly evicted his father for non-payment of rent, expediting his move to America. Following his trip home, he donated an annual bursary of £50 to the Girls' Collegiate School in Londonderry.

His generosity was well-known, and he readily performed in benefit productions for fellow actors in need and for public causes. In March 1880 he gave a benefit matinee for the Irish relief movement. He was also a generous friend, loaning money with no expectation of repayment and paying for medical care. Having flourished himself under the mentorship of Edwin Forrest, he helped many younger actors to develop their careers. One such was Mary Anderson, who he first met when she was fifteen and organised her first theatrical rehearsal, which resulted in her first ever role. A few years later in 1883, by then the preeminent actress on the American stage, Anderson played Desdemona to McCullough's Othello.

Nicknamed 'genial John', McCullough was much beloved by his fellow actors and friends and was also known as something of a bon viveur and ladies' man who conducted many dalliances. He is thought to have had a long-standing affair with actress Helen Tracy which resulted in at least one daughter. His sexual exploits ultimately may have led to his contracting syphilis, which is thought to have been the cause of his increasingly impaired cognitive abilities (though only euphemistically alluded to by early biographers). Once renowned for his perfect recall, from 1883 he began to have difficulty remembering his lines, and fellow actors covered for him as best they could. He took some time off and stayed at the house of his friend John Carson in Quincy, Illinois, 'where he passed some time in a gallant but hopeless struggle against the encroachments of disease' (Winter, 1889, 26). He returned to the stage later in 1883 but by the spring of 1884 his decline was obvious to all. He travelled to springs at Carlsbad in Germany for a cure but returned in worsened condition.

Performing at McVicker's Theater in Chicago on 29 September 1884 he broke down on stage, unable to deliver his lines, and was booed off by the audience, presumed drunk. It was his final performance. He was committed to the Bloomingdale Insane Asylum in New York a few months later where his behaviour was unpredictable and sometimes violent. (It was not his first time to be in an insane asylum, as he had previously conducted research in one for his portrayal of King Lear.) He was then moved home to Philadelphia where his wife nursed him until his death on 8 November 1885, a few days before his fifty-third birthday.

After a private funeral service on 11 November, his remains were moved to St George's Hall, Philadelphia, for a public service, which was reportedly attended by 8,000 people, with another 10,000 who could not gain access gathered outside. He was buried in Mount Moriah Cemetery in Philadelphia. An elaborate grave monument was erected by his friends in 1888 with a bust of McCullough as Virginius, celebrating him as 'the eminent tragedian'. The following year his friend William Winter, a renowned theatre critic, produced a limited edition commemorative pamphlet, In memory of John McCullough, again paid for by his friends, which included an account of his life, a verse tribute and elegy by Winter, a copy of the funeral oration and details of the grave monument, with its list of financial contributors reading like a who's-who of 1880s American theatre.

Irrespective of the fact that McCullough died at home in Philadelphia, a story entered theatre lore that he was murdered by a fellow actor backstage at the National Theater in Washington DC and became its resident ghost. In a way John McCullough did have a ghoulish afterlife, as comedy actor Harry Spencer made a sound recording sometime between 1904 and 1908 titled 'The ravings of John McCullough'. The two-minute recording starts with 'They say I'm mad, raving mad' before descending into manic laughter, punctuated with garbled lines from some of McCullough's signature roles. If nothing else, the recording proves that McCullough's onstage decline had become the stuff of legend. In 1905 Susie Champney Clark published an unusual biography of McCullough, at least a third of which was given over to observations from individuals who claimed to have communicated with the actor after his death.