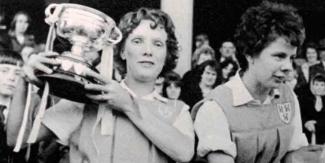 Mills, Kathleen ('Kay') (1923–96), camogie player, was born 8 October 1923 at 31 South Square, Inchicore, Dublin, to Thomas Mills, originally from Glanmire, Co. Cork, and his wife Winifred (née Wills) of Inchicore. Thomas Mills was employed by Great Southern Railways (later subsumed into CIÉ); in his spare time, he helped out at the company's sports club, which was set up for the workers and their families. Kathleen had three siblings, Gertrude, Ada and Robert, none of whom took part in competitive sport.

When Kathleen was eighteen months old, her mother died. Her maternal grandmother, Charlotte Wills, who had ten children of her own, raised the Mills children in her home across the square at 1 Abercorn Terrace, Inchicore. Kathleen was educated at the nearby Goldenbridge convent. She left school at a relatively young age and went to work in Lamb's jam factory.

At the tender age of five, Kathleen first held a hurley stick in her hand, and from the beginning displayed a natural talent for the game. An all-round sportswoman, she participated competitively in athletics, table tennis and gymnastics with the CIÉ sports club. However, camogie – based on the ancient Irish game of hurling, and the fastest field game in the world for females – was her first love. She quickly mastered the skills of the game to a very high degree.

Access to the facilities at the CIÉ sports club fuelled her passion for sport. She donned the wine, green and white colours of the club camogie team at the age of 14. Her exceptional skill at the game saw her immediately promoted to the club's senior side. Kathleen was first seen in action for Dublin in 1941. Throughout her entire inter-county career, she played in one position, left wing midfield. Her name was written opposite no. 8 on the Dublin team sheet for the next twenty years. Kathleen's first attempt to win an all-Ireland medal was thwarted at the final hurdle by Cork in 1941.

In an inter-county career that spanned twenty years, Kathleen won an astonishing total of 15 all-Ireland senior medals. This feat has not been accomplished by any other competitor in any code of Gaelic games, and is never likely to be equalled. She had to fight hard to get her first all-Ireland medal. Dublin were held to a draw by Cork in 1942 but won the replay. Kathleen's brilliant stickwork, fine goal, and general play drew compliments from the match reporters. In the 1943 and 1944 all-Ireland victories, Kathleen's name made headlines as she evolved from a fine player to be one of the stars of the side.

Kathleen's collection of All-Ireland medals was halted temporarily at three as the Leinster counties withdrew from the all-Ireland championship from 1945 to 1947. Subsequently, she herself did not play in the 1949 championship. Had she participated in these championships, it is possible that she could have finished her career with any number of all-Ireland senior medals from fifteen to nineteen.

The CIÉ club had a wonderful team and were given the honour of representing Dublin in 1948. Alongside her talented teammates Jean Hannon, Kathleen Cody and Sophie Brack, Kathleen collected her fourth all-Ireland medal. With all disputes now settled, Dublin set off on a run of six championship victories, from 1950 to 1955 inclusively. This was a golden era of Dublin camogie. Kathleen was surrounded by a galaxy of stars, including Idé O'Kiely, Peg Griffin, Doreen Rogers, Eileen O'Mahony, Una O'Connor and Annette Corrigan.

Antrim, Dublin's main rivals at the time, claimed the all-Ireland title in 1956. Dublin were back on the title trail in 1957, and won an unequalled ten in a row. Kathleen added five more to her own collection from 1957 to 1961, and captained the Dublin team in 1958. As a captain, she had great presence in a refined way. She inspired those around her and would say to her team: 'you know what to do, go out and keep at it'. On her thirty-eighth birthday, Kathleen won her fifteenth all-Ireland medal in 1961. She was carried shoulder high around Croke Park by her teammates, and later received a replica of the O'Duffy Cup, the all-Ireland senior camogie championship trophy. The occasion marked her retirement from inter-county camogie.

A natural left-handed player, she approached the ball at speed, lifted it onto her stick, continued running, and struck the ball without taking it into her hand. Always pleasing to watch, she read the game brilliantly and distributed the ball intelligently. A regular scorer of long-range goals and sideline cuts, she remained composed under pressure and never appeared hassled. Frequently after matches, men lined up to take off their hats and shake her hand.

Tall, slender and fair-haired, Kathleen was dedicated to camogie and was very modest with regard to her achievements. She was dignified and soft-spoken, popular with her teammates, and went out of her way to encourage and help newcomers to the team. Gentle with a droll sense of humour, Kathleen achieved what she set out to do.

In 1947 Kathleen married George Hill. Together they ran the Red Seal Handbag Company, which was located close to Phibsborough church on the North Circular Road, and later on Hill Street. George cut out the bags while Kathleen put on the frames and sewed the bags. With Kathleen's drive and entrepreneurship, the business grew. They were kind and caring employers and provided a livelihood for a number of people. Years later, they took a career change and entered the vintner trade; together they ran the Seventh Lock public house on the Grand Canal in Ballyfermot. They had no children. Kathleen died peacefully at her home on the Naas Road, Dublin, on 12 August 1996. She is buried in Palmerstown cemetery.

The all-Ireland camogie premier junior championship cup is named in her honour. The Kay Mills Cup, a replica of the O'Duffy Cup, is presented to the winning all-Ireland senior captain to keep in perpetuity, at the bequest of Kathleen's husband, George. She is commemorated by a plaque on the wall of her former home at 1 Abercorn Terrace in Inchicore, which carries the inscription: 'Lithe and graceful, a superb midfield player with neat wrist work, quick to lift and strike at full speed. She could score from any angle.' Kathleen was a truly outstanding player and a great ambassador for camogie.

Mary Moran, A game of our own: camogie's story 1904–2010 (2011); information from: Marian Carolan (niece); Eileen O'Mahony, Carmel Hanley and Brídín Uí Mhaolagáin (playing colleagues); and Phyllis Breslin (past president of the Camogie Association)