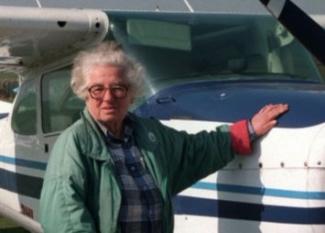 Mould, Daphne Desiree Charlotte Pochin (1920–2014), geologist, author, photographer and flight instructor, was born on 15 November 1920 in Salisbury, Wiltshire, the only child of Walter Mould, a teacher, and his wife Marguerite (née Steer). Growing up in the heart of what she called the ‘Englishry’ of the south, Daphne was mostly home-schooled by her aunt, a Greek scholar, because of a problem with her eyesight. At home she was introduced to classics such as Homer’s Odyssey and brought on nature rambles, where she discovered an urge to identify plants and animals, to study rocks and uncover fossils. In an autobiographical piece for CatholicAuthors.com, she wrote that on those walks she came to believe that ‘science … meant the discovery of truth, reality, the nature of being’.

In 1937 her cousin lent her his Horch car which she used to travel around the Salisbury countryside, and the following year she drove to Scotland to explore the Highlands. In 1939, just as the second world war was breaking out, she enrolled in a pure science degree at Edinburgh University. Her studies were interrupted by a life-threatening heart condition that prevented her being called up for full-time war service. Instead, she joined the volunteer car-pool and, after graduating with a first-class degree in 1943, was granted permission to take up a research fellowship and undertake a Ph.D. in geology. In 1946 she was awarded a doctorate for her thesis entitled ‘The geology of the Foyers Plutonic Complex and the surrounding country’ but, instead of taking up a career in academia, found herself turning to writing, in particular about the Scottish Highlands. In October 1948 she took out a five-year lease on a dilapidated house called Inchnacardoch in an area of the same name in Fort Augustus, overlooking Loch Ness. Her mother came to live with her permanently, while her father travelled north during school holidays until his retirement, when he also came to live there.

Mould’s time in Scotland was transformational, both spiritually and creatively. Her first book, published in 1950, was The roads from the Isles: a study of the north-west Highland tracks which told the story of the tracks along which the black cattle of the Highlands and Hebrides were driven south. Her second book Scotland of the saints (1952) was written after her conversion to catholicism. In the autobiographical The rock of truth (1953), Mould detailed her journey from Anglican to agnostic and finally to reluctant catholic when Fr Augustus, prior of the local Benedictine monastery, used Thomas Aquinas’s arguments to prove the existence of God. Mould says she fought hard against accepting the possibility but, on 11 November 1950, was received into the catholic church after a final row with her family.

In autumn 1951 the lease on the house in Inchnacardoch expired and Mould, accompanied by her parents, moved to Ireland, partly to follow in the footsteps of the Celtic saints whom she felt had brought about her conversion. They initially lived in Kylemore, Connemara, Co. Galway, where Mould forged a friendship with the Dominicans of Claddagh. In February 1952 she was confirmed in a private ceremony by Joseph Walsh (1888–1972), archbishop of Tuam, and two days later was admitted into the Third Order of St Dominic at the Dominican priory there. As committed to her faith as to her love of science, Mould produced fifteen books between 1952 and 1976 exploring the history and nature of religion in Ireland and Scotland, as well as her personal journey as a catholic, and in 1957 wrote a history of the Dominicans in Ireland at the request of minister general of the order. Her strong religious faith did not, however, quash her fiercely independent view of the world. In 2004 she wrote a strongly worded letter to the Irish Times regarding women’s role in the catholic church, calling their treatment ‘third-world’ and reminding readers that Jesus exhorted his followers to ‘do this in memory of me’ without adding ‘but only if you are a man’ (Ir. Times, 3 June 2004).

By the end of 1952 Mould and her parents had moved from Connemara to Cork, renting a large house in the village of Aherla, thirteen miles outside Cork city. It was here that she discovered the third love of her life when she learned to fly a small plane out of Farmer’s Cross Airfield, near to where Cork Airport was later built in 1961. As with all her activities, Mould committed wholeheartedly to excelling at flying, becoming the first female flight instructor in Ireland, and then the only female class-one chief instructor. She joined the Hibernian Flying Club and Farranfore Flying Club, renting small planes by the hour to conduct lessons and maximise her own time in the air. Recognising the value of aerial photographs of archaeological monuments (which had begun in Ireland in 1934), she took her camera on flights to photograph various archaeological sites. One of her students, Simon O’Flynn, described sitting white-knuckled beside her as she leaned out the window several thousand feet in the air, both hands off the controls and on her camera. From 1970s onwards she published a series of books incorporating her aerial photographs such as Ireland from the air (1972), Valentia: portrait of an island (1978) and Discovering Cork (1992), while in the 1980s she was commissioned by the Cork Archaeological Survey to take photographs for the five-volume series The archaeological inventory of County Cork (1992–2009). Her entire collection of photographs, ground as well as aerial, are now held by the Muckross House Trustees.

In total she published twenty-five books and contributed many articles to academic journals as well as to local publications, newspapers and tourist magazines. She also featured regularly on the radio, writing and producing a series of programmes entitled ‘The islands of Munster’ (1959–60) with Síle Ní Bhriain, as well as contributing widely to radio series such as Sunday miscellany and Seascapes. In 1990 she received the Sherkin Island Marine Station environmental award for her commitment to Irish heritage, environment and culture, while in 1993 UCC awarded her an honorary doctorate, describing her as ‘a scientist and a free spirit, a courageous pioneer and an outstanding woman warrior’ (Ir. Times, 2 May 2014).

In her final years, ill-health forced Mould to move between guesthouses and hotels, rather than return to live alone in Aherla. Her indomitable spirit remained, however, and she continued to research and write despite arthritis in her hands. When she was confined to bed for her final months, her friend Matt Murphy, director of Sherkin Island Marine Station, described her as ‘a caged lioness’. She died on 29 April 2014 in Cork University Hospital and donated her body to medical science.