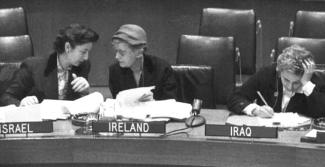 Murphy, Sheila Geraldine Mary (1898–1983), diplomat, was born 28 December 1898 at 18 Harcourt St., Dublin, elder daughter and fourth among five children of Dr. John Joseph Murphy, physician and surgeon (b. Carlow c.1841), and Louisa Murphy (née Dickson; b. Tyrone c.1863). She joined the Dáil Éireann civil service in 1921 as a compiler of statistics; she then joined the dáil publicity department, in which she served from February 1921 to January 1922, when she joined the secretariat of the provisional government. In February 1923 Murphy became private secretary to James McNeill (qv), Irish high commissioner in London (1922–8), a post she held until 1926, when she returned to Dublin as private secretary to the secretary of the Department of External Affairs, Joseph Walshe (qv). She held this post, in conjunction with that of archivist from 1936, for the next twenty years until 1946, when Walshe left his post as secretary to the department to become Ireland's first ambassador to the Holy See.

Some historians of Irish foreign policy have overlooked Sheila Murphy's importance in the development of Irish foreign policy. As private secretary to the secretary and as archivist, Murphy dealt with highly confidential documents and correspondence and worked closely with Joseph Walshe. Walshe only divulged information to his staff on a need-to-know basis; this even applied to his second-in-command, Seán Murphy (qv), so, as his private secretary and in charge of all secret archives and correspondence, Sheila Murphy had a comprehensive knowledge of, and the most open access to, the highest level of policymaking in the department. The ‘Secretaries files’ in the External Affairs collection at the National Archives in Dublin show that Sheila Murphy initialled and minuted with her characteristic ‘SGM’ the most sensitive material in the Department of External Affairs. Murphy was one of ‘a very small, tightly knit, confidential group of officials’ who advised Éamon de Valera (qv) on political matters (Cruise O'Brien, Memoir, 133).

It was not until after Walshe was appointed ambassador to the Holy See in 1946 that Sheila Murphy was given a ‘diplomatic post’. With her twenty-four years’ service she was one of the longest serving members of the department, along with Walshe, Frank Cremins (qv), and Seán Murphy. Sheila Murphy and Rosita Austin, the department's librarian and translator, were the only women in relatively senior ranks in External Affairs from 1922 to 1946, and Murphy the only woman ‘career diplomat’. Three other women (Mary Tinney, Máire MacEntee, and Roisin O'Doherty) joined External Affairs as third secretaries in 1947.

Murphy was made a second secretary in the political and treaty relations section in 1946, being promoted to first secretary in 1948. This promotion was due to her length of service and her links with the pre-1922 administration. In an era of staff shortages in the department, Murphy's skills and institutional memory were valuable assets. She also served as first secretary in Paris (1956–61) and on the first Irish delegation to a UN general assembly (1956). By 1961 she was in charge of the international organisations section of the department, which had responsibility for all international organisations except the UN. She was promoted to assistant secretary in 1962 and on her retirement (19 February 1964) was Ireland's highest ranking female diplomat.