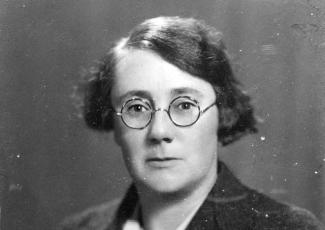 Price, Dorothy Stopford- (1890–1954), paediatrician, was born 9 September 1890 in Roebuck, Dublin, daughter of Jemmett Stopford, engineer, and Constance Stopford, whose father, Evory Kennedy, was master of the Rotunda Lying-In Hospital. Jemmett Stopford died from typhoid fever in 1902 and the family moved to London to live with relatives. As a foundation scholarship student at the newly established St Paul's Girls’ School in London, Stopford's interest in social work was noted. She worked with the Charitable Organisation Society in London and passed the entrance examination for Regent St. Polytechnic. However, Stopford began her medical studies in TCD in 1916. She was to get plenty of clinical experience as a student in TCD during the 1918–19 influenza epidemic. In 1921, immediately after graduating with her MB, she began working at the Kilbrittain dispensary, in west Co. Cork. Stopford's republican outlook led to her appointment as medical officer to a Cork brigade of the IRA. Furthermore, she lectured on first aid to Cumann na mBan members of the Kilbrittain branch, which was linked to the West Cork Brigade of the IRA and its flying column. Stopford resigned from Kilbrittain dispensary in 1923. In 1925 she married Liam Price (qv), a barrister and district justice in Co. Wicklow, who published widely on the local history of his native county. They lived in Fitzwilliam Square, Dublin; the marriage was without issue.

Stopford-Price's career was spent mainly in St Ultan's Hospital for Infants and the Royal City of Dublin Hospital, Baggot St., where she made use of the radiological facilities when surveying children who were susceptible to tuberculosis. She was to make her professional reputation through her research in Germany, Austria, and Sweden into tuberculosis and BCG (Bacillus Calmette-Guerin, which prevented TB). She believed the disease was a ‘closed book’ in Ireland due to ‘the fact that doctors in Ireland did not read or visit German-speaking centres, and took everything via England’ (Price). Stopford-Price studied under Dr Wassen, who introduced BCG with great success in Sweden. She completed a postgraduate course in Bavaria in 1934, and represented St Ultan's the following year at an International Hospitals’ Congress in Rome. Moreover, her interests did not focus purely on medical research, as she was a member of the Irish Clean Milk Society. Her TCD master's thesis in medicine, ‘Primary tuberculosis of the lungs of children’ was completed in 1935, and subsequently published in the Irish Journal of Medical Science. She introduced BCG to St Ultan's in 1937. By 1946 the TB unit at St Ultan's had been extended to thirty cots, and she noted that ‘BCG is used exclusively at St Ultan's, which is the first hospital in Great Britain and Ireland to use it’ (Price). Her work was recognised by Dr Noel Browne (qv), minister for health, when the National BCG Centre was located at St Ultan's in 1949 with Stopford-Price as its first chairman. Her 1942 book Tuberculosis in childhood was widely and favourably reviewed; a second edition was published in 1948. Internationally she was nominated for the World Health Organisation Leon Bernard prize for her contribution to social medicine. However, her hectic schedule, with many hospital appointments (she was consulting physician to the Royal National Hospital for Consumptives in Ireland and had as well Baggot St., St Ultan's, and Sunshine Home commitments) and the demands of her private practice, finally caught up with her. She suffered an attack of muscular rheumatism in 1939, and a stroke in the late 1940s; a second stroke killed her on 30 January 1954. Stopford-Price is remembered as a shy, driven individual who made the most of her talents.