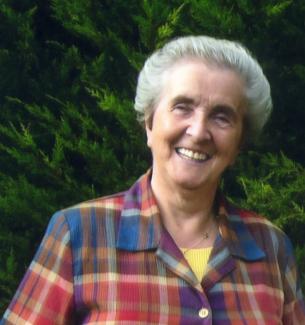 Randles, Eileen (1937–2015), teacher, education leader and nun, was born 26 April 1937 in Kenmare, Co. Kerry, the youngest of three daughters born to Tom Randles and his wife Nora (‘Dolly’) May (née Healy). The family lived on the premises of the garage Tom ran on Shelbourne Street in the town. After Nora’s death in 1951 Eileen was raised by her sisters; the siblings developed a strong, lifelong bond. Eileen was educated at St Clare’s Convent national school and then for a year at Kenmare secondary school. She boarded (1950–4) at Loreto Convent, Killarney. In 1954 she entered Loreto Abbey, Rathfarnham, Co. Dublin. Randles commenced her noviciate in June 1955 and made her final profession to the Loreto (Institute of the Blessed Virgin Mary (IBVM)) congregation in June 1962.

From 1957 she studied Irish and French at University College Dublin (UCD) and was awarded a BA in 1960. She then taught at Loreto schools in Wexford town and Gorey, Co. Wexford, as well as at the prestigious Loreto St Stephen’s Green, Dublin, where she completed her Higher Diploma in Education (H.Dip.Ed.) in 1963. Randles was appointed principal of Loreto Wexford (1963–70) and Loreto Rathfarnham (1970–3). In 1973 she completed an MA in education at Maynooth College. Her thesis, published by the religious publisher Veritas, as Post-primary education in Ireland 1957–1970 (1975), mapped the course of the recent transformation of the Irish education system, particularly the implementation of ‘free’ post-primary education, announced by Donough O’Malley (qv) in 1966, alongside the attendant ‘free book’ and ‘free transport’ schemes. It was only at this point that the Irish state became directly involved in establishing secondary schools. Randles viewed the mooted establishment (1970) of community and comprehensive schools, with their pronounced secular orientation, as a threat to the existing (religious) secondary and vocational schools.

Randles was superior of Loreto communities in Foxrock, Dublin (1973–4) and Bray, Co. Wicklow (1974–9), and was a leading member of the Conference of Convent Secondary Schools. In 1979 she was appointed education director of the catholic archdiocese of Dublin. Her already significant bureaucratic and administrative expertise was further enhanced as she managed the archdiocese’s patronage and direct control of the vast majority of primary schools in the Dublin region. The archdiocese was undergoing significant expansion at this time, as the number of parishes increased from 100 in 1972 to over 200 by 1985. Randles established over 100 primary and over 80 post-primary schools in Tallaght, Clondalkin, Swords, Balbriggan, Malahide, Darndale and Ballymun, as the Dublin region underwent significant population growth.

Her educational expertise was widely respected and she served on the governing body of UCD (1982–8) as an appointee of the Minister for Education. She spent a sabbatical year (1985–6) at Regis College, a Jesuit theological college in Toronto, Canada. Randles returned to Dublin and was appointed president (1986–95) of the Mater Dei Institute of Education, founded in 1966 by the archdiocese of Dublin to train religious education teachers. Randles established an MA in religious education there, and successfully negotiated government recognition for those teachers who were ‘topping-up’ their teaching diploma qualifications with extra-mural courses.

Randles’ considerable expertise and impressive knowledge – acquired as a principal, school manager and senior educational administrator in the Dublin archdiocese – placed her at the forefront of successful efforts to embed religious influence and denominational values in Irish education. During the 1980s she participated in high-level negotiations which delineated the deeds of trust utilised in the establishment of new secondary community schools. These legal instruments are the basis upon which school ownership is established and school management is undertaken (despite funding the vast majority of schools in Ireland, as of 2022 the state owns less than ten per cent of schools). In 1992 she became general secretary of the Catholic Primary Schools’ Managers Association (CPSMA). In the 1990s, deploying her encyclopaedic knowledge of educational administration, Randles played an important role in embedding religious control and values in the deeds of trust and the memoranda of understanding used by Vocational Education Committees (latterly Education and Training Boards (ETBs)) to establish secondary schools. In the latter instance deeds of trust also contained legally binding guarantees regarding catholic religious instruction and worship, based on shared patronage with a religious trustee (usually a diocese, religious order or congregation), and the recruitment of religious teachers. Randles drafted and negotiated the complex agreement between the Irish Vocational Educational Association (later ETB Ireland), various teaching unions including the Teachers’ Union of Ireland (TUI) and Association of Secondary Teachers of Ireland (ASTI), and the Irish Catholic Bishop’s Conference, enabling the establishment of secondary community colleges. The latter, confusingly also colloquially known as ‘community schools’, are a legally distinct educational entity also operating a shared patronage model with a religious trustee.

While all three types of schools comprise significant denominational religious patronage and control, community schools have much greater individual operational independence and are entirely funded by the state. Randles deeply influenced the form and structure of the legal instruments underpinning each of these three types of school. She was thus a leading figure in the institutional expansion of Irish education as the population increased in the latter decades of the twentieth century. Collectively these mechanisms embedded religious patronage into newly established state funded secondary schools, reinforcing episcopal governance of the vast majority of state-funded schools in Ireland.

Though kindly and soft-spoken in private, Randles was formidable and precise in professional contexts and did not suffer fools gladly. She frequently bested the senior officials she encountered in negotiations. Her effective and precise reasoning, applied alongside her wry humour, was based on unassailable knowledge and expertise. Randles was a key figure during the lengthy negotiations, lasting many years between educational stakeholders, religious organisations and the state, which led to the Education Act (1998). The first piece of comprehensive primary legislation to govern Irish education, among the Act’s provisions was a clarification of the role of patrons and boards of management in the running of schools.

Over a long career Randles served on a variety of interlinked catholic, religious and educational organisations. She was an education commissioner with the Council of Religious in Ireland, secretary to the education commissions of the Irish Catholic Bishops Conference and a vice president of the Joint Managerial Body, an umbrella group for catholic and protestant secondary schools. She was a leading member of the Association of Managers of Catholic Secondary Schools and was a trustee of the Association of Community and Comprehensive Schools.

After her term of office with the CPSMA ended in 2002, Randles was central to the establishment of the Loreto Education Trust. Created to manage the Loreto (IBVM) congregation’s portfolio of primary, secondary and fee-paying schools, the trust gradually assumed ownership and patronage responsibilities from 2003 onwards. The trust structure designed by Randles was widely adopted by other religious orders and congregations undertaking similar transformations. She also served on the boards of management of a small number of schools during this time.

Randles was deeply influenced by Mary Ward, the English founder of the Loreto (IBVM) congregation, in her pursuit of educational provision both to support female autonomy and to assist those living on the margins of society. Insights into Randles’s views on religion and education may be found in her articles ‘The church in education’ (The Furrow, 1977) and ‘The ethos of a Catholic school’ in Teaching religion in the primary school: issues and challenges, published by the Irish National Teachers’ Organisation (INTO) in 2003. During an appearance on the Late Late Show for a televised debate about the role of religion in education (7 May 1993), Randles asserted that religion should be fully integrated into the teaching of all subject areas. Although strident in her views, she was also generous in sharing her knowledge of Irish education, even with those who disagreed with her preference for religious control of education. She shared her significant expertise on school establishment and patronage with Educate Together, urging that organisation to be ‘courageous’ as it strove to found secular schools. While general secretary of the CPSMA Randles compiled a compendium of secondary legislation and departmental circulars governing Irish education, regarded as canonical in the school sector.

She also served on a variety of official committees and governmental working groups. She was a member of the National Education Welfare Board and served on the child protection committee established by the Irish Catholic Bishops Conference. Randles served on an advisory committee that examined safety and health at first and second levels in the education sector, established in 1994 to support the work of the Health and Safety Authority, and in 2003 chaired the New Schools Advisory Committee of the Department of Education and Science.

From 1992 Randles lived amongst a Loreto community in Blackrock, Co. Dublin. She died 5 December 2015 in St Vincent’s Hospital, Dublin. A fine cook who sang soprano in the Foxrock parish choir for many years, she was regarded by those who knew her as a modest, generous and warm-hearted person. At her funeral mass (for which she had chosen the liturgy and music in advance) at the Church of Our Lady of Perpetual Succour, Foxrock, members of the INTO (of which she was a long-time member) were asked to pray for her. She was cremated at Mount Jerome cemetery, Dublin, and her ashes buried in the Loreto Abbey House cemetery, Rathfarnham.

While not well-known, Randles was one of the very few female – lay or religious – leaders in twentieth-century Irish education. Over four decades she had a major impact on the sector as a teacher, principal, school manager, governor, institutional leader, bureaucrat and negotiator. Her extensive experience and unparalleled knowledge girded her singular role in ‘copper-fastening and strengthening church control of education’ (Irish Times, 9 Jan. 2016). The considerable contribution she made to Irish education was a result of her notable tenacity and singular pursuit of her personal religious values. A building at St Patrick’s (Loreto) national school, Bray, is named after her and the Sr Eileen Randles Award for ‘outstanding service to education’ is presented annually by the CPSMA.