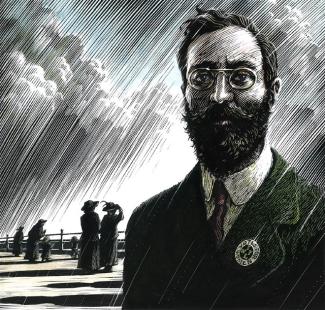 Skeffington, Francis Sheehy- (1878–1916), radical, was born Francis Skeffington on 23 December 1878, in Bailieborough, Co. Cavan, only child of Joseph Bartholomew Skeffington, inspector of schools, and his wife Rose Magorian. He was brought up in Downpatrick, Co. Down. Educated privately by his father, he was emotionally closer to his mother, who came from a poor farming family and was eighteen years older than the forceful husband whose condescension she endured. J. B. Skeffington believed education, logic and discipline solved all problems and his son brought these characteristics into conflict with some of his father's beliefs. From the age of 11, W. T. Stead's Review of Reviews became the boy's ‘bible’. Through Stead he adopted J. S. Mill's feminism and the belief that women's suffrage was vital for the triumph of social reform and public probity. Many of his opinions and exhibitionist tactics derive from Stead, who perished in 1912 on the Titanic.

Skeffington studied modern languages at UCD from 1896 to 1902, graduating BA (1900) and MA (1902). He arrived in college as a non-smoking teetotaller, vegetarian and anti-vivisectionist, pacifist and feminist. His non-conformity was marked by his refusal to shave and distinctive garb, a rough tweed suit with knee-breeches, a collarless shirt, long stockings and large boots. College contemporaries were amused and intimidated by his tendency to take casual remarks as expressions of heartfelt opinion, engaging the speaker in fierce argument or pressing him to defend his views in public.

Skeffington took a leading role in reviving the college Literary and Historical Society, becoming auditor for 1897–8, having beaten James Fitzgerald-Kenney (qv) by one vote. Through it he befriended both James Joyce (qv), who portrayed him as McCann in Stephen Hero and A portrait of the artist as a young man, and Tom Kettle (qv). He clashed with Joyce on sex, on W. B. Yeats's (qv) Countess Cathleen (which Skeffington thought an insult to Ireland), and on Stead's petition in support of the Hague peace conference. Joyce called Skeffington the second most intelligent man in college, but saw his worldview, like those of catholics and ultra-nationalists, as distorting individual lives in the name of abstract heroism. Joyce and Skeffington issued in pamphlet form (1901) articles that were refused publication in the student magazine, St Stephen's.

He was a keen mountain-climber, walker and swimmer, and he believed that vigorous physical exercise was preferable to ‘unnatural’ stimuli. These exercises were undertaken to maintain sexual continence, not only from religious motives (he was an increasingly sceptical catholic who became an atheist c.1902), but because of his firm belief in personal responsibility. With J. S. Mill he held the view that the world was overpopulated and the emancipation of women would remedy this by turning them from concentration on reproduction to a broader range of interests. He thought intellectual development reduced the sexual drive and disapproved of artificial contraception on ‘aesthetic’ grounds and because he believed it facilitated irresponsibility and exploitation. However, he opposed a 1911 campaign against risqué English newspapers as a clericalist attack on free speech.

At college Skeffington also made the acquaintance of Hanna Sheehy (qv), daughter of David Sheehy (qv), MP. They reinforced each other's feminist beliefs, became engaged in 1900 and married on 27 June 1903, assuming each other's surnames to become Sheehy-Skeffington. Their partnership was based on deep intellectual and emotional ties and soon after their marriage Hanna adopted her husband's atheism, trying to persuade her siblings to follow suit.

After teaching at St Kieran's College, Kilkenny, Skeffington became the first lay registrar of UCD in 1902. He resigned in 1904 after publicly criticising the college's reluctance to admit women on equal terms with men. Thereafter he and Hanna supported themselves precariously on his freelance journalism and her teaching. He was Irish correspondent for the Manchester Guardian, L'Humanité, and the Daily Herald and wrote non-political articles for the Freeman's Journal. He also published undistinguished fiction – notably a historical novel, In dark and evil days, under the pseudonym ‘Christopher Francis’.

The couple had one son, Owen Sheehy-Skeffington (qv), born 19 May 1909. Hanna suffered severe medical problems during the pregnancy which, she recorded before the birth, was the result of a deliberate decision to which she fully consented. They raised their son without religious education and also refused to have him vaccinated. Conor Cruise O'Brien later expressed horror at reminiscences of how Francis locked Owen in a dark room as a ‘humane’ substitute for corporal punishment; in fact he believed corporal punishment acceptable in early childhood and it was Hanna who opposed it.

Despite strong links with British radicals, Sheehy-Skeffington refused to consider a career abroad, believing that his duty lay in Ireland. He saw Irish nationalism as inherently democratic, challenging a bureaucratic ancien regime which he regarded as the natural ally of ‘clericalism’. Michael Davitt (qv) was one of his heroes, and he opposed the conciliationist policy of William O'Brien (qv) as appeasing aristocrats. He co-founded the Young Ireland branch (YIB) of the United Irish League (UIL) in 1904 and in 1906 was assistant editor of the short-lived weekly Nationist, intended as a mouthpiece for the YIB and rival to D. P. Moran's (qv) Leader. Here he first published ‘dialogues of the day’, commenting on public affairs. These continued in pamphlet form, in the short-lived National Democrat (1907), which he co-founded to continue Davitt's campaign for secular education, in the Irish Peasant of W. P. Ryan (qv) 1907, and the Irish Nation, also run by Ryan between 1908 and 1910. Sheehy-Skeffington published a biography of Davitt in 1908, stressing Davitt's clashes with the clergy and his commitment to a principled radicalism not confined by national chauvinism. He was refused access to Davitt's papers and produced a selective and idealised portrait. Arthur Griffith (qv) accurately criticised his claim that Davitt had never departed from fairness and dignity in his attacks on Charles Stewart Parnell (qv) in 1890 and 1891. Sheehy-Skeffington, however, distrusted cultural nationalism as reactionary and opposed the Gaelic League as he thought Irish was inferior to Esperanto.

The Sheehy-Skeffingtons were co-founders in 1908 of the Irish Women's Franchise League (IWFL) and regularly addressed meetings in the Phoenix Park, Francis adding a ‘Votes for Women’ badge to his characteristic costume. He joined the Socialist Party of Ireland in 1909 but retained membership of the UIL until May 1912, when he resigned in protest at the Irish party's refusal to include women's suffrage in the home rule bill. Later that month, he and Hanna co-founded the suffragist weekly Irish Citizen, becoming sole proprietors early in 1913. The IWFL adopted militant tactics: Hanna was imprisoned twice while Francis adopted disguises to heckle Asquith and Bonar Law on their visits to Dublin. The AOH retaliated for denunciations of John Redmond (qv) by beating up suffragists and dispersing their meetings; when participants in a Phoenix Park meeting were chased into the zoo the Leader published a widely-circulated verse ‘Skeffy in the zoo’, accompanied by a cartoon of Sheehy-Skeffington at the chimpanzees’ tea-party.

He came into renewed conflict with the AOH during the 1913 lock-out for his vehement support of the strikers. He attacked clerical claims that a proposal to send strikers' children to Liverpool was a form of proselytisation, and he was stripped and beaten by Hibernians while smuggling children onto a train at Kingsbridge (later Heuston) station in Dublin. He participated in the formation of the Irish Citizen Army as a workers' self-defence force, though he resigned early in 1914 over its increasing militarisation and ties with the nationalist Irish Volunteers.

As a nationalist, a pacifist and a radical he opposed war in 1914. He feared that an allied victory would strengthen the autocratic Tsarist empire at the expense of a relatively advanced Germany, and a triumphant Britain would become aggressively imperialist and repress Ireland. The war added to his financial problems by cutting off freelance work, while his anti-war stance alienated political donors. Imprisoned on 29 May 1915 for making anti-recruiting speeches, he went on hunger and thirst strike after his conviction on 9 June, and even the Leader called for all possible action to save his life. After his release on 16 June under the ‘cat and mouse act’, to evade rearrest he went to England and thence to the US. Between August and December 1915 he worked with feminist and separatist groups there, trying unsuccessfully to raise funds for the Irish Citizen.

Although Sheehy-Skeffington's pacifism did not imply absolute non-resistance (he believed sections of officialdom contemplated ‘a military pogrom’, which the Volunteers would be justified in resisting), he feared they were developing militarist tendencies and preferred to encourage passive resistance through a campaign against wartime taxation. He attempted to organise a civilian defence force to prevent looting during the 1916 rising and showed great bravery, on one occasion attempting to rescue a wounded British officer under fire.

Returning home on the night of 25 April 1916, the military arrested him and took him to Portobello (later Cathal Brugha) barracks, Rathmines, Dublin. Here he fell into the hands of Captain John Bowen-Colthurst (qv), an unstable officer who took him as a hostage on a raid. On the morning of 26 April 1916, Sheehy-Skeffington and two other civilians were shot by firing squad on Bowen-Colthurst's orders. One of the last persons to see him alive was Monk Gibbon (qv), who had imagined him an eccentric but was lastingly impressed by his ‘greatness’ and ‘conscious dignity’. Sheehy-Skeffington had insured his life for £500 in 1915, which covered his debts, and the Irish Citizen continued after his death.

Bowen-Colthurst subsequently raided the Sheehy-Skeffingtons' house, seeking evidence to justify his actions. A court-martial found him guilty but insane and after a brief confinement, he emigrated to Canada. Bowen-Colthurst may have genuinely suffered from temporary insanity, but official inquiries were highly inadequate and their attempts to minimise the crime consolidated Sheehy-Skeffington's fame as a nationalist martyr. His career is overshadowed by his death and disputes about whether Hanna's subsequent political development continued or betrayed his legacy. A distinctively Edwardian rationalist radical, he himself agreed that he was a crank – ‘a small instrument that makes revolutions’.