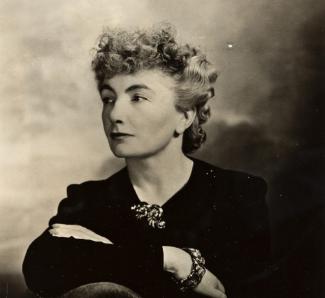 Snow, Carmel (1887–1961), editor of Vogue and Harper's Bazaar, was born on 27 August 1887 in Dalkey, Co. Dublin, one of six children to Peter White (1850–93), businessman, and his wife Anne (née Mayne), daughter of Thomas Mayne, an MP for the Irish Home Rule Party from 1883–90. Snow’s father was managing director of the Irish Woollen Manufacturing and Export Company and a member of the Irish Industries Association. When he died unexpectedly while organising the ‘Irish village’ concession for the World Fair in Chicago in 1893, his widow took over the project which proved a huge success. Anne White decided to remain in Chicago, opening a shop of Irish handicrafts, and in 1895 sent for Carmel and her sister, who had been living with their maternal grandparents in Terenure, Dublin.

Carmel was educated at the prestigious Dearborn Seminary in Chicago, a boarding school in Winnetka, Illinois, and a convent finishing school in Brussels, Belgium. By this time her mother had married a New York retailer, Edward Van Pelt Douglass, and taken over a well-known New York custom dressmaking firm, T. M. & F. M. Fox, which produced Parisian haute couture for the American market. Anne White was imposing, managerial and hardworking and made the firm ever more successful; the family lived comfortably, with frequent holidays in Ireland. Carmel spent her formative years helping her mother supervise the shop and workroom, which employed 250 fitters and seamstresses, and accompanying her on buying trips to Paris.

During the first world war Snow went to Paris with the Red Cross and proved so efficient and hardworking, that she was put in charge of all Red Cross female personnel in the city. At the end of the war she returned to New York with a reference from her employers stating that she was ‘indefatigable and smart as a tack’ (Snow, 35). While preparing for a buying trip to Paris, she was asked by a fashion columnist to report on the collections. Her copy was so good that she began writing a syndicated fashion column for the New York Times and was given a letter of introduction to Edna Woolman Chase, editor of Vogue. In 1921 she was brought on to the Vogue staff as assistant fashion editor where her verve, charm and creativity compensated for her lack of magazine experience. Her personal view of fashion was also developing, encapsulated in such aphorisms as ‘Buy only what you need. Buy the best quality you can afford’ (Snow, 57). Snow also led an active social life and on 11 November 1926, at the age of thirty-nine, she married socialite George Palen Snow. He had a seat on the New York stock exchange and was independently wealthy but preferred to spend his time at sport and gardening. She gave birth to three daughters in quick succession, and a son who died at birth, but pregnancy did not slow her down: she reportedly only took one week off for each of the births.

In 1929 Snow was made American editor of Vogue but she was increasingly frustrated by the magazine’s stuffy and exacting approach and by its emphasis on fashion and society, to the exclusion of culture and literature. She was also chaffing beneath the domineering and inflexible authority of Woolman Chase and, when an opportunity arose to jump ship, she did so, taking the role of fashion editor at William Randolph Hearst’s Harper’s Bazaar. Hearst’s publications were in direct competition with Vogue and the two publishers had made an informal agreement not to poach each other’s staff. Snow’s defection caused immense bitterness and Vogue’s publisher Condé Nast never spoke to her again, although she was godmother to one of his children.

Appointed editor of Harper’s Bazaar in 1935, Snow finally had full freedom to exercise her talents. Her first priority was to improve its look. Her eye for talent was legendary—she considered it her greatest gift—and she quickly assembled a dynamic team. Graphic designer Alexey Brodovitch was appointed art director, and soon the magazine had a fresh, bold, modernist format where text and pictures interacted. She took a leap into the unknown with Diana Vreeland, a socialite with no magazine experience but whose highly original sense of style was admired by Snow—eventually editor of Vogue, she was one of the icons of the twentieth-century fashion world. Snow also persuaded a little-known Hungarian photographer, Martin Munkacsi, to leave Berlin and join Harper’s although he had no previous experience in fashion. His first assignment made history when he produced the first action fashion picture, a swimsuit-clad model running on a beach. But Snow’s ambitions for her readers went beyond fashion; she wanted ‘well-dressed women with well-dressed minds’ (Snow, 172). She appointed the brilliant but mercurial writer George Davis as literary editor, and Harper’s became a showcase for good writing, featuring for example the work of Frank O’Connor (qv), Katherine Anne Porter and Evelyn Waugh. The magazine also helped discover Truman Capote and introduced the waspish drama critic Kenneth Tynan to American readers. During the second world war she published photographs smuggled out of occupied France to show Americans how destructive the war was.

Once they were hired, Snow allowed her staff full creative freedom; her own strong organisational abilities and sharp decisiveness kept them in order. Within a few years Harper’s circulation had increased threefold. It was a byword for style and innovation in the industry, and its small, slim, impeccably dressed editor became a legend. She crossed the Atlantic every year for the Paris collections, and her nod was enough to get a designer started. In appreciation of her help in reviving the postwar French fashion industry she was awarded the Knight’s Cross of the Légion d’honneur in 1949. The Italian government awarded her the Stella della Solidarietà. She brought the designers Christian Dior and Cristóbal Balenciaga to prominence in the US, and in later life was invariably dressed in Balenciaga suits.

Ireland also benefited from her fame and influence; she never lost her Irish identity nor her accent and was known as the ‘Irish pixie’ in reference to her throaty voice, her slimness and her famed intuition. One of her discoveries in the 1950s was the Irish tweed and linen designer Sybil Connolly (qv), and in 1953 she arranged for a group of American fashion designers to accompany her to Ireland; Vogue and Life responded by featuring Connolly and the Irish model Ann Gunning. Two years later, when Harper’s devoted twelve pages of an issue to British fashion, Snow insisted that four of them went to Ireland.

Her devotion to Harper’s was all-consuming: her children were mainly brought up by nannies and she and her husband lived increasingly separate lives. Though some accused her of ruthlessness, most of her staff appreciated her humour, warmth and willingness to take risks. Known for her love of a three-martini lunch, Snow remained as editor well past the usual retirement age and became increasingly erratic and demanding. She was eventually ousted in 1957 and replaced with her niece, Nancy White, whom Snow had dismissed for years as insufficiently tough for the publishing world. Her departure marked the end of an era.

After retirement Snow spent three years living in Rossyvera House in Clew Bay, Co. Mayo, but the move was not a success. Her friends visited infrequently, and she found the isolation and climate too much to bear. She returned to New York and died in her sleep on 7 May 1961. Her funeral was so well attended that it had to be moved from the Lady Chapel to the main body of Saint Patrick’s Cathedral. Carmel Snow was buried, in a red brocade Balenciaga suit, in Cold Spring Harbour, Long Island, New York.