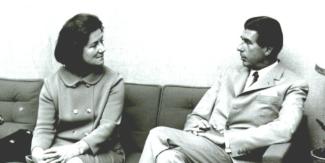 Tinney, Mary Catherine (1924–2006), diplomat, was born on 15 February 1924 in Scotland, where her parents were living briefly. When her father, Eamonn Tinney, an income tax official, was posted to Letterkenny, they returned to his home county, Donegal; her mother, Winifred Tinney (née Reid), was a national school teacher from Co. Londonderry. Mary had one older brother and two younger brothers; the youngest was only a few months old when after spending 15 August 1928 at the seaside with the family, their father died after falling down a flight of steps in a grocery shop in Dunfanaghy. He had been a popular figure locally, active in the Gaelic League and a colleague of Louis J. Walsh (qv) in organising the 1927 Feis Tirconaill in Letterkenny.

Winifred Tinney's work as a teacher thenceforward supported her family. After a short time in Milford, Co. Donegal, they moved to Greenore, near Carlingford, Co. Louth, and Mary Tinney grew up there. She was a boarder in St Louis Convent, Monaghan town, before going to live in Dublin with her mother who was teaching in the Dominican convent in Ballyfermot, well known for her success in directing school choirs. Mary was an outstanding student and like the rest of the family had a great love of music; she played piano and double bass, had a fine mezzo-soprano voice, and won many prizes in singing competitions, especially in feiseanna. Her musical ability was such that she could have considered a musical career; even as an amateur, she appeared along with well-known artists like Bernadette Greevy, and from 1949 until the early 1960s she was frequently a soloist in concerts broadcast by Radio Éireann.

From 1942 Tinney studied French and German in UCD, performed in college concerts and plays, and graduated with an honours BA, winning a gold medal for her oral proficiency in French and German. She began an MA in economics, but stopped work on it when in an open competition she successfully obtained a post in the Department of External Affairs. The 1948 entry competition was, unusually, not subject to the provisions of the 1926 Civil Service Regulation (Amendment) Act, and thus for the first time women could apply; Tinney was one of three women recruited at the level of third secretary into External Affairs as the department expanded. This was the first time that women were appointed under the procedures that applied to male recruits; before 1948, Sheila Murphy (qv), who for years was almost the only woman on the staff, was originally a private secretary, rather than a diplomat; and Josephine McNeill (qv) was appointed directly into post as head of a mission in November 1949, as envoy and minister plenipotentiary to the Netherlands.

A handful of women entered the department in the following decades, but few made careers in the diplomatic service; the marriage ban, which applied to all civil service posts until 1973, meant that only the unmarried could stay on to move up from entry level positions as third secretaries. By 1967 Tinney was one of three or four women working in External Affairs; both women appointed with her in 1948 had left, and after sojourns in London and Stockholm, she was the highest ranked female diplomat and was serving as counsellor in the mission in Paris (1963–70). Her work at that time as deputy head of Ireland's delegation to the Organisation for Economic Cooperation and Development, and as a member of a committee of ministers' deputies to the Council of Europe (1970–73), was of significance as the country readied itself for membership of the European Economic Community. In December 1971 she formally presented to the council the Irish government's charges of brutality in Northern Ireland against the British government. Tinney then served as secretary to the cultural relations committee in her home department in Dublin, and was one of the forty senior Department of Foreign Affairs officials assembled for a very significant conference on Ireland's foreign policy in April 1973; she was the only woman present.

In November 1973 she was selected to be Ireland's ambassador to Sweden and Finland, the first woman to have the full rank and title of ambassador, and in 1976 she was also accredited to Poland. In November 1978 she was sent as ambassador to Belgium, and she ended her career as ambassador to Kenya (1985–7). (She was also accredited to Tanzania, Zambia and Zimbabwe.) She retired in 1987, by which time she had become quite a well-known personality in Ireland and abroad, and was featured several times in newspaper interviews as a role model for women who wanted to have a professional career. (In the year before her retirement she was one of only two women at assistant-secretary level in the entire civil service, out of a total of ninety-four such posts.) Family associations also increased her public profile; her sister-in-law was Sheila Tinney (1918–2010), professor of mathematical physics at UCD, and a nephew and niece, Hugh and Eithne Tinney, have had notable musical careers. Mary Tinney had continued her musical training during her postings in London and Stockholm in the 1950s, and when she became ambassador, her grand piano, sometimes played by her nephew, featured often in Irish embassy soirées. She was also known in diplomatic circles as a very competitive golfer and bridge player, and she enjoyed these activities to the full during retirement. From 1996 to 1998 she was president of the UCD Women Graduates' Association.

She died unmarried on 22 November 2006, in Our Lady's Hospice, Harold's Cross, Dublin, after an illness.