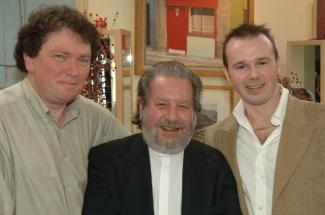 Tullio, Paolo Luigi Mario (1949–2015), restaurant owner, writer and food critic, was born on 20 August 1949 in Falkirk, Scotland, the only child of Dionisio Tullio, a restaurant owner and his wife Irene (née Fusco). Although Tullio’s parents were Italian, his mother was raised between Italy and Scotland following her father’s move to the latter as a young man. Dionisio and Irene, who were distant relatives, had known each other before the second world war and, at the end of the war, reconnected and moved to Scotland where they were married. Following the birth of their only son, the couple moved to Salisbury, England, where the young Paolo spoke only Italian until the age of five; after that English became his first language. From the age of eight he attended a prep school of which, he said, he had mostly happy memories. He did, however, recall being frequently told by the boys ‘we won the war’ and, when his parents visited the school, Dionisio was likely to kiss his son in affectionate greeting and farewell, something that was viewed by the other boys as ‘suspect, if not damn foreign’ (Irish Independent, 10 June 2015). From the age of thirteen, Tullio boarded at Downside School, Stratton-on-the Fosse, Somerset, a school that had considerably more international students. Nonetheless, Tullio attributed the development of his sense of ‘Italian-ness’ to those years, fostered by frequent visits to the house his father had inherited from an uncle in Gallinaro, in the Lazio region of Italy. The family visited at least once, if not twice, a year and here he was introduced to cousins, extended family and the children of his parents’ friends; all of which, he says, ‘grew’ his sense of being Italian.

Tullio’s parents moved to Ireland in 1962, where they bought three restaurants and a home in Booterstown, Co. Dublin. Tullio continued his education at Downside School until 1968, when he followed his parents to Ireland and began studying law at Trinity College Dublin (TCD). 1969 was something of a watershed year for the Tullio family; Dionisio had grown increasingly anxious to return to Italy, while Tullio himself realised he had no interest in continuing his legal studies. Dionisio and Irene returned to Italy and Tullio switched courses from law to studying English, psychology and philosophy.

University life suited Tullio and his years in TCD were formative: he was introduced to his future wife, artist Susan Morley, on the steps of the Dining Hall in 1971, and he surrounded himself with friends who were equally creative and brilliant. In later life his friend and neighbour, director John Boorman, described Tullio’s mind as ‘one of the most extraordinary things on this planet … before Google he was absolutely vital’ (Irish Times, 11 June 2015), and the friends he attracted were testament to his charisma: future theatre director Michael Colgan, award-winning actress Dillie Keane, singer Chris de Burgh. Yet even among this talented and creative group, Tullio stood out. Paul McGuinness, future manager of U2 and one of his best friends in college, described him as a gold-lamé cape-wearing eccentric, while another friend, food and wine critic Tom Doorley, recalled him being deeply involved with the Trinity Players where he was more than happy to take centre-stage in their productions. Upon being introduced to Tullio, Morley said he was ‘urbane … funny … [and] had beautiful manners’, all trademarks of Tullio’s public persona in later years (Irish Times, 11 June 2015).

In 1972 he graduated BA Mod. (honours) from TCD (and received an MA as a matter of course without further study) but took some time to settle on a career path. Initially he worked for eighteen months with clinical psychologist Dr Joe Fernandez at St Brendan’s Hospital, Grangegorman, compiling psychological data, but as a long-term prospect it did not appeal. In a later radio interview, he described his office as a small, windowless room where he spent much of the day sorting through data. For a polymath with a broad range of interests and an enormous curiosity in people, such work offered very little outlet for his talents. He then took on a role as an interpreter for Italian businessmen buying cattle in Ireland for export to Italy. Positioning himself as a cattle-agent, Tullio toured the country, translating between Italian and English in the negotiations.

In 1977, however, he finally found his niche. Dionisio had advised his son against becoming a restaurant owner – indeed, in an interview with Miriam O’Callaghan in June 2013, he laughingly said his father had educated him to avoid that very thing (RTÉ Radio One, 14 June 2013). Nonetheless, following his father’s death at the age of fifty-seven, Tullio helped his mother sell their Dublin restaurants and part of the proceeds went into buying Armstrong’s Barn, a restaurant in Annamoe, Co. Wicklow, from Peter and Christine Robinson. The move to Annamoe was a deliberate choice, as Tullio and Morley were then expecting their first child and ten acres in the Wicklow countryside, bordered by the Avonmore river, fitted in with the lifestyle they wanted for themselves and their children. The restaurant was also a going concern and came with an established clientele and reputation. With Tullio at the front-of-house and chef Humphrey Weightman continuing in the kitchen, the restaurant thrived despite the economic gloom of the 1970s and early 1980s. Armstrong’s Barn had been awarded a Michelin star under Peter Robinson and it remained in place for 1978 but, as per the rules of the award, it was removed following the change of ownership. Nonetheless, the food continued to excel and in 1981 and 1982 the Michelin Guide awarded the restaurant a ‘Red M’, indicating good food at a reasonable price. For several years Armstrong’s Barn was a destination restaurant, attracting local and international diners. Tullio later described the restaurant’s private dining room as ‘a rendez-vous [sic] for the rich and famous [where] diners included Lee Marvin, John Boorman, Frederick Forsyth and, perhaps most famously, Charles J. Haughey’ (qv) (Irish Independent, 11 Dec. 2013).

In 1986 Hurricane Charlie caused enormous damage to the restaurant and, with no flood insurance to enable a rebuild, he and Susan were forced to close. Following an approach from two sound engineers, the restaurant building was converted into a recording studio where, over two years, artists such as Christy Moore, Antonio Breschi and Donal Lunny recorded. When the couple chose to convert the Barn into a home they sold their original house of ‘Annaglen’. They later sold Armstrong’s Barn in 2003 and moved into a house they had built in a neighbouring field. In addition to the recording studio, Tullio also opened up a wine business that was years ahead of twenty-first century online shopping: orders were taken over the phone for carefully curated boxes of wine which he then delivered nationwide.

In addition to these businesses, Tullio also turned to writing. During his time in TCD he had occasionally written under the pen name Denis Oddfinger, and from 1989 he combined his knowledge and love of food with his ability to write. In 1997 he was appointed restaurant critic and wine correspondent with the Irish Independent; he also co-founded and wrote articles for tasteofireland.com, and wrote numerous lifestyle and travel articles for Food and Wine magazine. His 1997 book, North of Naples, south of Rome was described by the Irish Times as ‘a warm breeze of Italy’ in its description of Italy’s history, food and politics (Irish Times, 4 May 1996) and was made into a six-part television series that aired on RTÉ, the Travel Channel and PBS. The evocative writing and beautiful illustrations by his wife Susan brought fans of the book to his door in Gallinaro, looking to meet the author. Although his 1998 novel Mushroom man was less well received, it was applauded nonetheless as Ireland’s first ‘internet novel’ and found a cult following on the west coast of America. In 2010 he published Paolo Tullio cooks, a cookbook featuring more than 150 recipes based on traditional Italian cooking, and in 2013 he self-published the novel Longing and belonging, based on the experiences of Italians living in the area of Gallinaro during the 1930s.

As well as writing, Tullio also made numerous television appearances, most notably in seven series of The restaurant with his good friend Tom Doorley, which aired on RTÉ One from 2004, and TV3 from 2015. He was, according to Doorley, the ‘good cop’ to Doorley’s ‘bad’ (TomDoorley.com). He also made a series of cameo appearances in films such as The butcher boy (1997) as Mr Caffolla, How to cheat in the leaving certificate (1997) and the Tailor of Panama (2001), and he also had a regular slot at 3pm on Thursdays on the Sean Moncrieff show on Newstalk radio. His ability to talk on any subject knowledgeably and in an engaging fashion made him a much sought-after interviewee: he spoke four languages fluently, read extensively, was able to quote Greek and Roman classics from memory, had plumbed his own home, designed a functional waterwheel to generate electricity and built a wood oven for his garden. One listener described him as ‘a peerless raconteur’ whose ‘simple, seductive, commonsense talk that made you want to at least try what he had suggested’ (The Moncrieff Show remembers Paolo Tullio, 8 June 2015).

In 2011 Tullio was diagnosed with kidney disease and for four years he endured dialysis several times each week, hoping to receive a kidney from a donor. In February 2015 he was admitted to St Vincent’s University Hospital, Dublin. Though seriously ill and with little to no appetite for hospital food, he nonetheless retained his humour and fortitude. Upon being asked by Doorley could he bring him anything, Tullio responded ‘a small bottle of good olive oil’ (Irish Independent, 4 Sept. 2015). Paolo Tullio died on 5 June 2015 in St Vincent’s University Hospital, leaving behind his wife Susan Morley, from whom he had amicably separated in 2004, his two children Rocco and Isabella, and his mother Irene. He was also survived by Marian Kenny, his partner of several years. Reflecting Tullio’s dual identity as an Italian and an honorary Irishman, there was a humanist ceremony in TCD’s Examination Hall on 11 June, after which his remains were brought to the family plot in Gallinaro for burial. As a testament to Tullio’s enduring popularity and the great affection in which he was held, the hall was crowded with representatives from all aspects of Irish society – music, film, television, radio and hospitality – and speakers included friends such as John Boorman, Michael Colgan and Sir Donnell Deeny, while his brother-in-law Chris de Burgh sang. Honouring his old friend shortly after his death, Doorley wrote: ‘the key to Paolo was his kindness, his generosity, his humanity’ (TomDoorley.com).