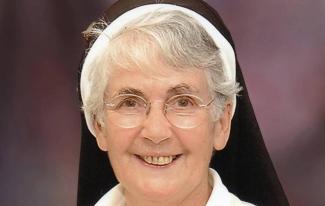 Walsh, Sr Patricia (1942–2015), missionary nurse, was born Anna Maria Catherine Walsh on 23 September 1942 in Portlick, Glasson, Co. Westmeath, the eldest of three girls and a boy, to Michael Walsh, a fisherman, and his wife Bridget (née Nolan). Having attended Glasson primary school (1946–9) and Tubberclair national school (1949–56), Walsh completed her education in St Peter’s secondary school, Athlone. She sat her leaving certificate in 1960 and was then accepted into St James’s Hospital, London, to train as a registered nurse. She excelled in her studies – in 1965 she won the book prize for being the best practical student nurse of the year – and the following year began a midwifery course at Weir Maternity Hospital in Balham, London. Upon qualification part of her work was as a district midwife involved in training students. Her teaching work brought her into contact with a Swiss-national Dominican Sister of the Sacred Heart of Jesus, a missionary order working in Africa and Europe, which proved to be a fateful encounter. Always spiritual in her outlook, Walsh expressed an interest in religious life and, in January 1969, joined the order at Greenwich, London. On 14 September of the same year Walsh began her novitiate, taking the religious name ‘Patricia’, and two years later, on 28 August 1971, she took her first vows.

For the next two years, Walsh dedicated herself to her training as a member of the Dominican Sisters and during that time did not engage in nursing or midwifery. This changed in 1973 when she was sent to the order’s headquarters in Harare, the capital of Zimbabwe, then Rhodesia. From there she was sent to St Theresa’s Hospital in Chilimanzi, about 230 km from Harare where, in 1976, she took her final vows, becoming a fully professed member of the order. For the next several years Walsh worked as a ward sister in St Theresa’s, the order’s mission hospital, and travelled the area holding baby clinics. In the course of her work, she encountered severe malnutrition among the local population. Determined to address the causes rather than solely dealing with the effects, Walsh opened a residential ‘nutrition centre’, enabling village health-workers who located mothers with children suffering from malnutrition to bring them back to the centre. Over the course of several weeks Walsh gave these mothers the tools with which to avoid malnutrition – she taught them skills such as gardening, poultry and rabbit keeping, and clean water habits – and then sent them home to implement what they had learned. To her disappointment, very little of what she had taught the villagers was used in real-life situations. To understand why she went to stay in one of the villages, observing the conditions which discouraged the women: ‘if I would have to go for many kilometres to fetch a bucket of water for my vegetable plants, I wouldn’t be so eager either’ (Sr Gabriele Flender, June 2022).

Walsh rationalised that hygiene and access to water were the root causes of many of the problems encountered by local populations and, without them, all the training and advice at the nutrition centre was to no avail. In 1978 she approached her religious superiors and, with their full support, enrolled in a series of educational courses to help her in her work. In 1978 she took a course in health-care nursing, and in 1981 enrolled in the University of Rhodesia (now the University of Zimbabwe) where she studied for a diploma in health education, followed by a degree in adult education. During her time studying she was stationed at the order’s convent of St John’s in Harare, but after graduating in 1984 she returned to Chilimanzi where she set about implementing what she had learned about water and hygiene. She encouraged people to build ‘Blair toilets’ (a ventilated pit latrine), and she sourced funds to dig wells and drill boreholes to ensure there was safe, clean water locally rather than having to travel for kilometres every day.

Walsh's initial posting to St Theresa’s Hospital had coincided with the bitter five-year war for control of British-ruled Southern Rhodesia. Her sympathy, as always, was with the people she lived among and, having witnessed severe malnutrition among the population under British rule she contributed to the liberation struggle by providing food, clothes and medicine to those in need, whether village people or freedom fighters, to the point where she felt that she too was a freedom fighter in her own right (Irish Times, 4 Aug. 2015). During the war, Walsh says she ‘longed for the birth of Zimbabwe’ and when Robert Mugabe came to power in 1980 ‘it was good. We were so hopeful, so happy after independence’ (Irish Times, 4 Aug. 2015). In the newly formed Zimbabwe, the ministry for health had extensive resources and the health of the nation improved but, as Mugabe’s rule became increasingly autocratic, Walsh and the people of Chilimanzi found themselves at odds with the new regime. Never afraid to speak out against atrocities where she saw them, Walsh penned several articles for local and international publications. Writing for Kubatana.net in June 2005, Walsh laid out in stark terms the violence and poverty facing the people living in Hatcliffe Extension holding camp outside Harare, at the hands of the government. Over the preceding decade the Sisters had helped sink eight bore holes, build and run a creche for AIDS orphans and establish nursing care at the camp, but it was demolished in a single weekend in 2005 and the Sisters were ordered to take down their buildings (Kubatana.net, accessed June 2022). In a similar article for the Irish Independent, she described entering the camp to find ‘desperate people’ picking through the wreckage of their homes, where ‘Operation Taking Out the Rubbish’ had made 10,000 people homeless (Irish Independent, 3 June 2005). Despite her feelings of despair and anger, Walsh finished her article with a flash of the warmth and wit for which she was known: ‘my otherwise very grey hair had a nice red tinge yesterday evening from the red dust in Hatcliffe … for a little while again today I will be a ‘red head’ – my Irish genes are coming through …’ (Kubatana.net, accessed June 2022).

Walsh advocated for the poor and the powerless, and spoke out on their behalf regardless of who she felt was oppressing them. In November 2008 she wrote a letter criticising the World Health Organisation (WHO) for the bureaucracy she felt was holding up access to food and medicine, in particular the use of questionnaires: ‘How can a child whose parents have died of HIV know how to obtain, let alone fill in a questionnaire to feed younger siblings?’ Her plea was for such institutions to stop cutting down trees for paper and questionnaires, and start using them for ‘firewood to cook the food and stop the deaths’ (Independent Catholic News, 3 Nov. 2008).

In addition to her work in the community, from 1984 to 1996 Walsh served on her order’s general council, and from 2001 to 2008 she was a member of their regional council, with particular responsibility for health issues. She also continued to serve on the boards of St Theresa’s Hospital, Regina Coeli Hospital in Nyanga, and St Joseph’s in Mutuare (both in Zimbabwe), where she organised practical workshops for nursing Sisters and for doctors and staff, sourced medicines and equipment, and served on the health advisory committee. During her time on the order’s general council, Walsh was the national coordinator of the health desk. In that capacity she came into contact with many of the NGOs at work in Zimbabwe, including the International Christian Aid Network, World Council of Churches and Zimbabwe AIDS Foundation. She was able to use these connections to source donations, medicines, clothes and funds for the people of Hatcliffe camp and the Emerald Hill Children’s Home.

In April 2014 Walsh travelled to Germany on business and, while there, fell ill and was diagnosed with lung cancer. Having undergone treatment at Guys Hospital, London, she returned briefly to Zimbabwe in December 2014. According to her consoeur, Sr Gabriele Flender, although weak and unwell, Walsh continued to crack jokes, express concern for others who were ill and console her congregation. In March 2015 Sr Patricia returned to England where she died in St John’s Hospice in north London on 18 June 2015 and was buried at Greenwich after funeral mass. The order in Harare held a service in her honour where, according to Sr Gabriele, the cathedral was packed both with young and old people who gathered to pay their respects.