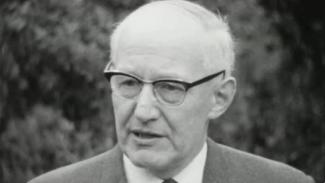 Walton, Ernest Thomas Sinton (1903–95), scientist, educator, and Nobel prize laureate, was born 6 October 1903 in Abbeyside, Dungarvan, Co. Waterford, elder of two children of the Rev. John Arthur Walton and Anna Elizabeth Walton (née Sinton). His father, a methodist minister, was born in Cloughjordan, Co. .Tipperary, and his mother in Richhill, Co. Armagh. His sister Dorothy Letitia was born in 1905, a year before the untimely death of his mother. John Walton later married Mary Elizabeth Kirkwood, and their only child, James Kirkwood, was born in 1919. Because methodist ministers at that time moved residence about every three years, the Walton family lived in thirteen different locations in Ireland between 1901 and 1995: eight of them in counties that became part of Northern Ireland in 1920.

The requirement to move house so frequently influenced the manner in which Ernest Walton pursued his primary and secondary education. After kindergarten in Banbridge, Co. Down, he attended Cookstown Academy for a period before entering Methodist College, Belfast, as a boarder (1915–22). There he excelled in science and mathematics. Having acquitted himself with distinction, he entered TCD in the autumn of 1922 on foot of an entrance scholarship (sizarship) and a scholarship from Co. Armagh, where the family resided from 1919 to 1922. After a remarkable undergraduate career in physics and mathematics, Walton graduated in 1926 with a double first and a large gold medal in experimental science. He remained in Trinity for a further year to pursue a master's degree in hydrodynamics, and was duly awarded an M.Sc. as well as the McCullagh prize in 1927.

Having gained an overseas scholarship from the royal commissioners for the great exhibition of 1851, Walton was accepted as a research student in Trinity College, Cambridge, in the autumn of 1927 under the supervision of Ernest Rutherford, the director of the Cavendish laboratory. Mindful of Rutherford's earlier experiments on the transmutation of nitrogen into oxygen when bombarded with alpha particles (charged nuclei of helium atoms) from radioisotopes such as radium, Walton suggested the possibility of using artificially produced beams of swift charged particles to induce nuclear transmutations. The challenge was to generate such particles with the requisite energy by accelerating them across an electric potential difference (voltage) which Walton had estimated to be of the order of at least a few million volts. Walton's research initially focused on the generation of high-energy electrons through acceleration in a circular electric field. Although the experiment was unsuccessful, his research laid the groundwork for the development of the betatron in later years. He then switched his efforts to the linear acceleration of positive ions.

It was about this time in 1928 that George Gamow applied wave mechanics to the problem of alpha particle emission from radioactive substances. He argued that alpha particles of much lower energies could tunnel through rather than jump over the very high potential energy barrier surrounding the nucleus. John Cockcroft, a colleague in the Cavendish, saw that Gamow's theory could be applied in reverse. The possibility of getting particles into the nuclei of atoms, using voltages that could be relatively easily handled in a laboratory, thus became a tantalising reality. At Rutherford's instigation, Cockcroft and Walton joined forces. Working in concert, they succeeded in effecting nuclear disintegration by artificial means in 1932. Walton was the first to witness the birth of this new era of accelerator-based experimental nuclear physics when, on 14 April of that year, he observed the disintegration of Lithium nuclei bombarded with protons accelerated across 700,000 volts. Two alpha particles were produced, along with the release of an enormous surplus of energy which conformed exactly to Einstein's relationship between energy and mass, E=mc2, where E is energy, m is mass, and c is the velocity of light.

The significance of the experiment was threefold: first, it pioneered a new branch of physics in which artificially accelerated particles were used to initiate nuclear interactions in a controlled way; second, the experiment verified the predictions of the new wave mechanics; and, third, it was the first direct verification of Einstein's mass/energy relationship in a nuclear reaction in which the destruction of a very small amount of matter released a large amount of energy. The experimental approach adopted by Cockcroft and Walton is still used in many of the accelerator laboratories throughout the world.

On the academic front, Walton was awarded his Ph.D. in 1931. He remained in Cambridge till 1934 to investigate further aspects of nuclear transmutation with the support of a senior research award from the department of scientific and industrial research (1930–34) and a Clerk Maxwell scholarship (1932–4). Thereafter, he could have gone to any number of leading laboratories throughout the world but chose instead to return in 1934 to his alma mater as a fellow of TCD in the physics department.

In the same year (23 August) Ernest Walton married Freda Wilson, also of the methodist faith, who was a former school colleague and daughter of the Rev. Charles Wilson and Annie Wilson (née Elliott). She was a qualified kindergarten teacher who trained under the National Froebel Union and taught for a time at the Bishop Foy school in Waterford. Their four children Alan, Philip, Marion, and Jean all pursued careers in science. Their first-born, Winifred Ruth, died in infancy.

Much had changed in Ireland during Walton's seven-year absence in Cambridge. During that time, the efforts of government had been directed mainly to establishing the institutions of a new state in a world economy that was depressed and turbulent. Trinity College continued to be a hostage to poverty and stress, with little more than a trickle of public financial support. Funding for research was minimal, laboratory space was scarce, teaching and examination loads were heavy, and administrative duties were onerous. Throughout the war years (1939–45), the situation deteriorated further in the physics department with the departure to England of Robert Ditchburn, the Erasmus Smith's professor of natural and experimental philosophy and head of department, to assist in the war effort. This reduced the teaching staff to three. In addition, the little research time that was available was directed to a range of national problems identified by the emergency research committee set up by the government, mostly to deal with shortages such as domestic and motor fuel.

In 1941 Walton was asked by C. P. Snow of the British ministry of labour and national service to participate in scientific war work. After much soul-searching, Walton declined the invitation, having judged Ireland's needs to be his greater priority. Later, he was contacted by Sir James Chadwick with an unusual and quite mysterious request to know if he would participate in ‘war work’ in the United States, which subsequent clarification identified as the Manhattan project. Walton was not keen on going but, nevertheless, consulted the provost, E. H. Alton (qv), who refused permission, citing the needs of the already hard-pressed physics department to be the more important.

Walton's reluctance to participate in war work was not based solely on pacifist principles. He often argued that he would like to be a pacifist but would none the less have difficulty with that position in certain circumstances. His sensitivities on the issue of nuclear weapons had been heightened by the press coverage following the Cockcroft/Walton experiment (1932), which raised moral issues in the public mind with regard to the potential military applications of their experiment. At that time he pointed to the discovery of the neutron in 1932 and the demonstration of fission of uranium when bombarded with neutrons in 1938 as the two key experiments that underpinned the development of the bomb.

Post-war, Walton was strongly committed to minimising the threat of nuclear war and banning the bomb: hence his membership and presidency of the Irish Pugwash group, whose goal was precisely along those lines. He did, however, admit the possibility of a just war, when fought justly. Overall, Walton's approach to life was guided by the fundamental principles of his methodist faith as handed on by his parents, and he lectured widely on the relationship between science and religion.

Ditchburn remained in England after the war, and in 1947 Walton was appointed the Erasmus Smith's professor and head of department, a post that he held till his retirement in 1974. During his tenure the physics department grew in size to accommodate the sustained postwar increase in student numbers. As a lecturer, Walton was unrivalled in the way in which he could present even the most complicated concepts in simple, readily understandable terms, often aided by demonstrations, which reflected the same level of ingenuity that characterised his experimental work in Cambridge.

Although funding for research would remain wholly inadequate throughout the whole of his professional life, Walton worked on a number of scientific projects, delivered occasional lectures on linear accelerators, and published a number of papers. He was an ardent promoter of science teaching and research in Ireland, which had been largely neglected since the foundation of the state. In a letter to Éamon de Valera (qv) in 1957, Walton stressed the need for a strong scientific foundation on which to build prosperous industries and to increase agricultural output, and made several practical proposals to achieve this aim. His proposal predated the initiative of Seán Lemass (qv) and T. K. Whitaker in 1959 to establish a strong manufacturing sector in Ireland, based on foreign direct investment. In hindsight, Walton clearly foresaw the advent of the knowledge economy which, decades later, continues to transform global society.

Throughout his career Walton was honoured in many ways. The 1951 Nobel prize for physics was awarded jointly to Walton and Cockcroft ‘for their pioneer work on the transmutation of atomic nuclei by artificially accelerated atomic particles’. Walton's award, to date (2005), remains the only Irish Nobel prize in science. Other honours included election to the RIA (1935); the Hughes medal of the Royal Society of London (1938); honorary doctorates from QUB (1959), the Gustavus Adolphus College in Minnesota (1975), the University of Ulster (1988), and Dublin City University (1991); the naming of the Walton Causeway Park in Dungarvan and the Walton Building in Methodist College, Belfast, in his honour; and a plethora of other testimonials of his outstanding achievements as an educator and scientist.

It was appropriate that Ernest Walton returned in his twilight years to Belfast, the city that nurtured his early interest in science. Having attained the summit of his early ambition, he led a long and contented life, which inspired several generations of physicists, students, and colleagues alike. He died on 25 June 1995 in Belfast and was buried in Dean's Grange cemetery in Dublin. The family bequeathed all his papers and correspondence to the manuscript library, TCD. His portrait (by Thomas Ryan, RHA) hangs proudly in the entrance of the Physical Laboratory, recently renamed the FitzGerald Building.