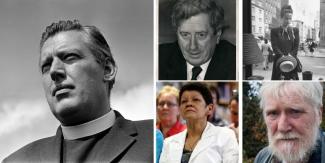 The Dictionary of Irish Biography (DIB) launches its open access website with a selection of new biographies and extensive revisions of high profile political and cultural figures.

Written by DIB historian Patrick Maume, substantial new entries for Garret FitzGerald (1926–2011) and Ian Paisley (1926–2014) delve deeply into the social, religious and philosophical origins and evolution of each man’s political vision, as well as capturing a tempestuous time in Anglo-Irish politics and outlining the considerable impact (for good or ill) and career achievements of both figures.

The entry on activist Christine Buckley (1946–2014) by DIB researcher Liz Evers, tells Buckley’s harrowing early life story as a resident of the infamous Goldenbridge school in Dublin, and highlights the critical part she later played in exposing the abuse of children in state-funded, religious run institutions. Currently the subject of her Ph.D., writer Liza Costello explores the rich career of Dermot Healy (1947–2014), a beloved ‘writer’s writer’, whose influence of Irish literature has long been understated.

In addition to the new biographies, many of our contributors submitted updates to their entries for the newly relaunched DIB. One such is a substantial revision provided by author Angela Bourke to her entry on Maeve Brennan (1917–93), capturing more recent scholarship on this lately rediscovered writer.