Dictionary of Irish Biography in print

The Dictionary of Irish Biography: from the earliest times to the year 2002, edited by James McGuire and James Quinn, was published in nine volumes in 2009 by Cambridge University Press, followed by two further volumes in 2018 which included biographies of individuals who had died between 2003 and 2010, as well as a selection of ‘missing persons’ – figures who had not been included in the first nine volumes.

All eleven volumes of the Dictionary of Irish Biography (Cambridge University Press, 2009 and 2018) can be ordered from www.brookside.ie (Ireland) or www.cambridge.org (worldwide).

The DIB project has published several themed books, curating its entries to give a deeper insight into the lives of the men and women involved in major Irish historical events, movements and migrations. 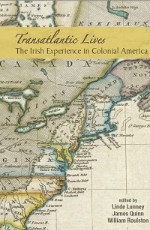 Transatlantic lives features sixty biographical essays from the Dictionary of Irish Biography, detailing the careers of a selection of Irish emigrants to North America in the colonial period (including the British territories that would later become Canada).

Those chosen are a representative sample of some of the more notable figures among these emigrants. Colonial administrators, soldiers and clergymen predominate. Among clergymen, Presbyterians (of various hues) are the most numerous, but space has also been found for Methodists, Quakers, Anglicans and Catholics, all of whom made their contribution to shaping the religious culture of the colonies.

The selection also includes educators, doctors, writers, artists, printers, merchants and even a (female) pirate to give some sense of the diversity of such emigrants, and their varying contributions to the economic and cultural development of the colonies.

The book is available to purchase on the BooksIreland website (Ulster Historical Foundation).

This book features a selection of forty entries from the DIB on men and women whose careers, in one way or another, were deeply involved with the Easter rising of 1916.

The biographies selected compose an inclusively broad picture of the rising, representing the spectrum of personalities and perspectives that were involved in the event. They include not only the insurgents (and some others) killed during the rising but also some of the women who were involved as soldiers or in supporting capacities; three nationalist leaders who opposed the rising; some of the senior figures in the British administration in Ireland in 1916; members of the British army that suppressed the rising; and two historians who made considerable contributions to the scholarly debate on 1916.

This selection aims to give a balanced view of the rising. In addition to the biographies, there is an extended introduction by Dr Patrick Maume of the DIB, and each biography is illustrated with an original drawing by artist David Rooney.

‘This is a book to savour, both because of its diverse cast of characters and the quality of the contributors who provide entries that are erudite, often spiky, fresh, nuanced and skilfully composed.’ Diarmaid Ferriter, Irish Arts Review. 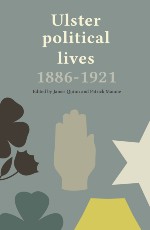 Ulster political lives examines the lives of fifty of Ulster’s most significant political figures in the turbulent period from the first Home Rule Bill of 1886 to the foundation of the state of Northern Ireland in 1921.

It includes DIB entries on leading figures such as Edward Carson, James Craig and Joseph Devlin, as well as on lesser-known but interesting figures such as Margaret Byers, Winifred Carney and George Clark, whose lives are also significant and instructive.

It details the lives of unionists and nationalists, loyalists and republicans, but also those who did not fit into such neat categories – socialists, trade unionists and feminists, who often avoided identification with the major political groupings but nonetheless made noteworthy contributions to the creation of Northern Ireland and the shape it took after 1921.

In 2021/22 the DIB will publish two new thematic titles, focusing on the contribution of Irish immigrants to American history, society and culture, and a volume of notable Irish sportspeople. Both will feature specially commissioned new biographies.